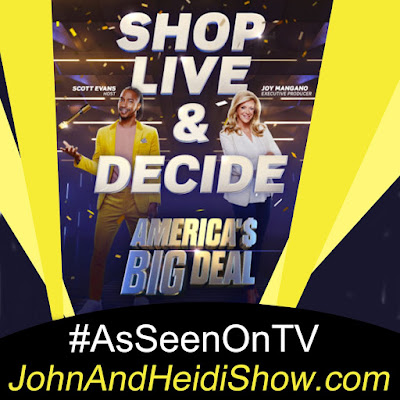 A new survey among millennial women shows that stress and sleep are among their biggest health concerns. According the survey, on average, women don’t start worrying about their health until they’re 29 and most agree that it’s important to start focusing on their wellness in their youth to prevent issues as they age. (https://bit.ly/3qI0uik)

A study by One Poll found that the average American will travel over 600 miles between Thanksgiving and New Years. (https://bit.ly/3xbBcuk)

Police in the United Kingdom have found more than 900 pounds of cocaine hidden in a shipment of onion rings. (https://bit.ly/30wVrqs)

Dwayne “The Rock” Johnson says he wants to be the next James Bond after Daniel Craig's final appearance as 007. (https://bit.ly/30HWrrh)

Disney is getting into the business of sports betting. (https://bit.ly/3nuLUbU)

Kool-Aid is issuing a recall for some of its tropical punch canisters, after small particles of metal and glass were found inside the mix. (https://bit.ly/3cklymy)

Elon Musk's son, who is named X AE A-Xii, joined him on a Zoom presentation to his company. (https://www.dailymail.co.uk/tvshowbiz/article-10226489/Elon-Musk-Grimes-son-X-AE-Xii-makes-rare-adorable-appearance-dads-Zoom-presentation.html)

A new report shows that Jeffrey Epstein had a photo of Prince Andrew grinning like a trophy in his Florida house. (https://bit.ly/3HGYg8X)

Most dust particles in your house are made from dead skin.

A British mother is being mocked on social media for not using contraception after she announced she was pregnant with her 11th child. (https://bit.ly/3FFucc5)

A Massachusetts family whose loved one's casket fell open as it was being lowered into a grave, causing the body to fall out, has sued the funeral home and the cemetery. The family of Andrew Serrano, a resident of Lawrence who died in March 2019, allege negligence and reckless infliction of emotional distress in the suit filed last Wednesday in Essex Superior Court, The Eagle-Tribune reported. During the funeral handled by the Perez Funeral Home at city-owned Bellevue Cemetery in Lawrence on April 5, 2019, "one of the side straps on the city-owned casket lowering device broke, causing Mr. Serrano’s casket to fall into the grave and break apart," according to the suit. The "corpse fell out of the casket" in full view of "horrified family members who became visibly distraught and hysterical," the suit said. The suit seeks $50,000 in damages. Messages seeking comment were left Tuesday with the funeral home and the city. (https://bit.ly/3otBqZH)

A man charged with running a scam that cheated a woman out of more than $80,000 missed a recent court date and was supposed to be rearrested, but his attorney says that will be impossible because his client has been dead for months. Johnny Masesa’s attorney told state’s attorneys in June that he received a death certificate saying his client died from complications of malaria in the Democratic Republic of Congo, where he has family. The Connecticut Post reported police and federal authorities have been unable to confirm the authenticity of the death certificate. Masesa and others are charged scamming a Connecticut woman out of $83,000 by posing as representatives of the Publisher’s Clearing House sweepstakes. The 45-year-old Masesa was arrested in 2019 and pleaded not guilty, and posted a $25,000 bond using a Florida address, the Post reported. He was scheduled in court on Nov. 4 but didn’t appear. Supervisory Assistant State’s Attorney Howard Stein told the newspaper the death certificate was written by hand and appeared to have several spots where corrections were made with correction fluid. Stein said he didn’t suspect attorney Douglas Rudolph of wrongdoing, and Rudolph said he has been unable to reach the doctor listed on the death certificate, the Post reported. Judge Peter Brown ordered Masesa rearrested and held on $100,000 bond if he appears. Masesa’s two co-defendants have court dates scheduled. (https://bit.ly/3Flejaj)

Magic is believing in yourself, if you can do that, you can make anything happen. - Johann Wolfgang Von Goethe

'We Are All Set For Year 6': Wholesome Thanksgiving Tradition Continues
https://www.sunnyskyz.com/good-news