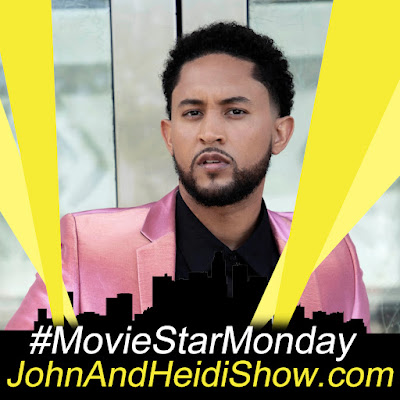 This #MovieStarMonday we visit with Tahj Mowry. He's been on many TV shows and in many movies! Watch for him on VH1’s “Naughty or Nice” line-up of holiday movies. Premiering on December 13th is his romantic comedy film LET’S GET MERRIED executive produced by Eva Longoria. In the new film, a bachelorette weekend at a Christmas-themed adventure park gets all kinds of holly jolly when Zoe, a hard-partying, down-on-her-luck, holiday-hater (Mishel Prada) decides to get married. That day. To a man she has yet to meet. But first... drinks! Tahj Mowry, plays Finn, Zoe’s love interest. Tahj Mowry made his acting debut at the age of four in the hit show Who’s the Boss, and went on to star in several TV series, films and animated cartoons. The younger brother of twin stars Tia and Tamara Mowry, all three siblings of the Mowry family were stars of hit sitcoms on different television networks. Tahj played a young prodigy on the Disney series Smart Guy, had a memorable role as Michelle’s friend “Teddy” in ABC’s Full House, and later joined his sisters on their hit series Sister, Sister. Tahj went on to star in several Disney films including Seventeen Again (co-starring his sisters); Hounded (opposite Shia LeBeouf); and The Poof Point. For more info, visit: https://www.vh1.com/
(I WAS WRONG.... THIS PREMIERS NEXT MONDAY.... SORRY)

According to a recent study, the custom of having the father of the bride pay for the whole celebration is dying out, with less than one in five parents footing the bill because they either can’t afford it or their children pay for it themselves. Splitting the cost of the wedding between both families is becoming more common, with four out of 10 couples sharing the expenses.

A female passenger who choked and took a chomp out of the neck of an Uber driver today pleaded guilty to a pair of criminal charges in connection with the bloody, unprovoked attack. In a plea deal, Michele Stilwell copped to battery and disorderly conduct, misdemeanors for which she was sentenced to 18 months probation. Stilwell, seen at right, was originally charged in a criminal information with battery and witness tampering, a felony. Stilwell, a licensed practical nurse, was also fined $850, directed to undergo a mental health evaluation, and ordered to have no contact with Michael Hassey, the 23-year-old victim. As reported in criminal complaints, Stilwell attacked Hassey from behind as he drove his Toyota near Stilwell’s St. Petersburg residence in mid-April. While the car was moving, Stilwell “reached forward and proceeded to choke the victim from behind.” Stilwell initially choked Hassey with two hands before wrapping an arm around his throat. As Hassey sought to pull over the car, Stilwell “managed to crawl forward onto the center console...and bite the victim deeply on the neck drawing blood.” She then scratched Hassey across the chest, “causing a large red in color mark with traces of blood visible.” Photos taken by witnesses--who stepped in to stop the attack--show Stilwell choking Hassey and splayed across the Toyota’s driver’s seat. Arrest affidavits note that Stilwell displayed an “indication of alcohol influence.” (https://bit.ly/3xDDBOl)

The latest trailer for “The Matrix Resurrections” puts a confusing twist on Neo's latest adventure by making it a movie within a movie. (https://bit.ly/3Ec8s7m)

A South Carolina woman has been awarded $10 million by a jury for injuries sustained after stepping on a rusty nail at Walmart. April Jones had to undergo multiple surgeries and eventually have her leg amputated as a result of an infection caused by the rusty nail. (https://bit.ly/3pbOX8y)

Eight People were arrested at an Irish cemetery after a brawl broke out between two different funeral parties. (https://bit.ly/3xIYsjs)

I saw this “life tip” online: Buy a cheap suitcase, fill it with a spare change of clothes, toiletries, phone charger and $50. Keep it in the trunk of your car. Unpredictable things happen. Safety experts often say we should have a few important supplies in our vehicle, like a blanket, some water, a few granola bars — in case you get stuck down a hardly-traveled road, or you need to leave because of a hurricane or wildfire or killer sharknados!

US Scientists have revealed that the world’s first living robots, known as “xenobots,” can now reproduce. Details about the robots, created using the heart and skin stem cells from the African clawed frog, were unveiled last year after experiments showed they could move and self-heal. (https://tinyurl.com/ybrrr56n)

The fastest mile run by a human 3 minutes, 43 seconds.

In Austria police were summoned to the report of a break-in at a furniture store. Investigating officers found the glass front door smashed but once inside couldn’t find anyone. They were getting ready to leave when an officer heard a sound — a sound of someone snoring coming from the carpet racks. And that’s where they found their crook, obviously tired out from the hard work of breaking in.

A woman walked out onto the tarmac at Los Angeles International Airport and tried to flag down a plane before being detained by police in a bizarre incident captured on video. The unidentified woman — who airport officials said had a plane ticket — walked out of a door at Terminal 1 and onto the ramp about 6:30 p.m. Monday, said LAX police Lt. Karla Rodriguez. “Airline employees who witnessed the woman exiting the terminal followed security protocols and maintained visual contact until the airport police arrived shortly thereafter and detained the woman,” Rodriguez told City News Service in a statement. “She told responding officers she was trying to flag down the aircraft, which was still parked in the gate area,” she added. The woman reportedly underwent a mental health evaluation at a local hospital, where she also was treated for a minor injury. It said in a tweet that the woman was “experiencing a mental health crisis. Officers acted professionally placing her in custody an(d) later transported her for a mental evaluation. #DoBetter” (https://bit.ly/3FXuET9)

The Tuscaloosa Police Department has arrested a man after he allegedly attacked a man and a woman on Thanksgiving morning. According to TPD, 36-year-old Pasha Darget was taken into custody after officers were called to an apartment complex in the 1300 block of James I. Harrison Parkway just after 8:00 a.m. Darget is accused of punching a 46-year-old woman as well as biting and cutting a 22-year-old man with a kitchen knife. The victims were taken to DCH Regional Medical Center for treatment. Darget was charged with assault and a misdemeanor domestic violence charge. He is being held at the Tuscaloosa County Jail on an $8,500 bond. (https://bit.ly/32Kyp01)

Take chances, make mistakes. That’s how you grow. Pain nourishes your courage. You have to fail in order to practice being brave. - Mary Tyler Moore