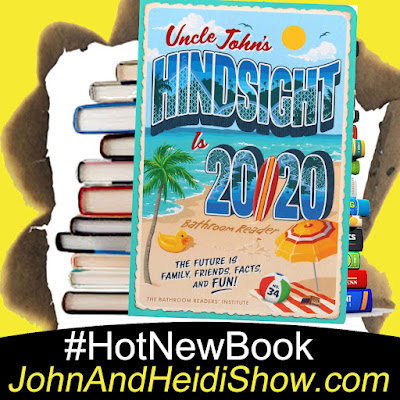 Today we visit with Gordon “Uncle John” Javna about the 34th annual edition of Uncle John’s Bathroom Reader... an all-new collection of fascinating trivia, strange-but-true oddities, and the ever-popular stories of dumb crooks!

Uncle John’s Hindsight Is 20/20 Bathroom Reader is packed with tons of new articles from the worlds of pop culture, history, and science. https://amzn.to/3rQ0LR1

According to a new survey of 2,000 Americans over the age of 21, 3 in 5 people dread going to family gatherings during the holidays. 2 in 3 people also say there’s always that one relative who drinks too much at holiday gatherings. (https://bit.ly/3Ep42K8)

While you might think delicious-looking food is pretty harmless, a review of studies suggests you’ve got it all wrong. Turns out regular exposure to virtual foods could encourage you to feast regardless of your actual hunger level. Spend too much time scrolling through a food-heavy Instagram feed and you could end up eating excess calories that contribute to weight gain.

Mayor Bill De Blasio is creating a designated zone in New York City where drug users can shoot up without legal consequences. (https://bit.ly/3EdROUV)

According to state GOP insiders, Dr. Mehmet Oz is likely to enter the high-stakes race for Pennsylvania’s open US Senate seat next year.(https://tinyurl.com/sm4aw8ju)

A tech company has created a way to transform your Tesla Cyber Truck into a mobile home. (https://bit.ly/3rl5OZo)

A new report claims demand is skyrocketing for real estate in the metaverse.(https://on.wsj.com/3lkSu36)

Kim Jong-Un has reportedly banned citizens in North Korea from wearing leather coats to stop them from copying his look. (https://bit.ly/3I9LCPQ)

After an unexpected blizzard, dozens of customers got snowed in and trapped for three days in a British pub with an Oasis cover band. (https://bit.ly/2ZF8Ufl)

A passenger on Delta Airlines was reportedly caught breast-feeding her cat during a flight to Atlanta. (https://bit.ly/3E9aAMR)

The world’s largest triceratops sold for $7.7 million to a private collector.

A phone store in Germany was the victim of an overnight break-in, but the thieves didn’t get away with what they thought they did. Police say one or more people used large rocks to break the glass in the store’s back door and gain entry. Once inside, several phones were cut or ripped from the displays. Lucky for the store all of the display phones are dummy phones and are of no value to the thieves. The store has been the victim of theft in the past so all the real phones are locked in a vault every night.

A Texas man was sentenced to over nine years in prison on Monday for fraudulently obtaining COVID-19 relief funds that he used for the purchase of a Lamborghini and other expenses. 30-year-old Lee Price III, who pleaded guilty in September to wire fraud and money laundering charges, received $1.6 million in PPP loan funds by falsifying his applications. On the applications, Price used the name of a person who died before the documents were submitted. In the paperwork, he also fudged payroll expenses and the number of employees he purportedly had at three separate businesses. Price used some of the ill-gotten gains to buy a Lamborghini Urus, a Ford F-350 truck, and a Rolex watch. The DOJ said authorities have recovered over $700,000 in the fraudulently obtained money. (https://bit.ly/3I0qewF)

The Blount County Sheriff’s Office stated in a Facebook post that a FedEx driver has been identified and questioned in the mysterious appearance of hundreds of packages in a wooded area in Alabama last week. According to the post, the driver was identified after law enforcement talked to security personnel at FedEx to gather more information in the case, which was launched after “300-400 boxes of assorted sizes” were discovered in the woods the day before Thanksgiving. The boxes were found in a ravine near Hayden, a small town north of Birmingham. Photos shared by the sheriff’s office showed the jumbled packages among the trees. Blount County Sheriff Mark Moon said deputies responded to the area to protect the dumped packages until FedEx workers could collect them. The Blount County Sheriff’s Office declined to release further information Monday, citing the ongoing investigation. (https://bit.ly/3D7Uwtu)

Everything you’ve ever wanted is on the other side of fear. - George Addair