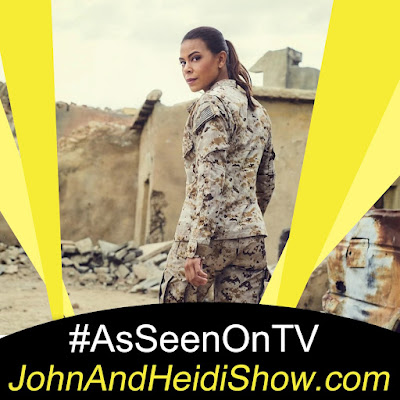 Today we visit with Toni Trucks. (Twilight) The hit series SEAL TEAM returned October 10th on CBS and then transitions to PARAMOUNT. In addition, Toni is taking the perspective she’s gained from her role even further. She launched her luxurious and fun family themed boxes in partnership with Military Made . The boxes will feature items for the whole family to enjoy, all made by entrepreneurs who were either in the military or are military spouses. There’s a great story behind each piece, which is notated within the box as well. https://militarymade.com/

Pretend To Be A Time Traveler Day

A new study reveals that a third of first year students in college experience anxiety and depression.(https://bit.ly/3DhGi9x)

Wives, your husband is pretty much OK with all of your friends. According to a survey:
85% of wives strongly dislike or hate at least one of their husbands’ friends.

Less than 10% of husbands say they dislike or hate at least one of their wives’ friends.

Kanawha County deputies said a man was charged after he made a false robbery call when he and several people were pulled over in a speeding vehicle. 27-year-old Matthew Hammack was arrested Thursday after a deputy made a traffic stop on a vehicle speeding on Interstate 64 near mile marker 55 in South Charleston. Below is the Metro 9-1-1 call deputies say the man allegedly made. The news release said several of the occupants in the vehicle seemed drunk, and the deputy returned to his cruiser to request backup to watch the occupants during any roadside tests. Before the units arrived, a man called and reported that a gas station had been held up in South Charleston near the exit where the traffic stop was made. Emergency dispatchers noted that that the phone that dialed 9-1-1 to report the robbery was located on I-64 near the traffic stop, not near the store that allegedly was robbed. Officers from the Charleston Police Department, South Charleston Police Department and sheriff’s office arrived and assisted with detaining the four occupants of the vehicle. When dispatchers called the phone used to dial 9-1-1 to report the alleged robbery, a phone in the back seat of the stopped vehicle began ringing. The news release said both occupants who had been in the back seat denied it was their phone. Hammack was arrested and charged with falsely reporting an emergency.(https://bit.ly/3Een0TW)

In a new interview, Alec Baldwin says he never pulled the trigger on the gun that fired and killed a woman on the set of his movie Rust. (https://cnn.it/2ZSZVaw)

Meghan Markle has won a legal battle against the Daily Mail tabloid. (https://nyti.ms/3pEAT7Z)

What’s the first thing we think about when we buy a new suitcase? We worry that it might get ruined. So skip the frustration you feel when your luggage gets beat up and by suitcases that are already dented and worn-looking. A company called Crash Baggage makes luggage that come pre-dented. That way, when your luggage gets tossed by a baggage handler you won’t be upset. https://crashbaggage.com/en/

Is your partner hiding something from you? A new survey finds over one-third of Americans in a relationship say they’re hiding a secret stash of money from their significant other. The poll reveals that 37 percent have a secret stash of extra funds — and these respondents are hiding away an average of $2,006. All this secrecy may be due in part to couples’ differing views on money. The average respondent said they have seven arguments about money per month with their partner.

In the UK, a man allegedly snatched a handbag from a woman. But as he tried to get away he collided with a wall and knocked himself unconscious. The man was taken to the hospital where he was treated for his injuries, arrested and then charged.

Each year in the U.S. 250 house fires begin with a Christmas tree

Every three minutes somewhere in the world someone reports a UFO sighting.

German police are looking for witnesses after burglars broke through the wall of a toy store to steal dozens of Lego sets. Police said Tuesday that the theft took place over the weekend in the western town of Lippstadt. The burglars left about 100 empty cardboard boxes behind, German news agency dpa reported. It wasn’t immediately clear whether the burglars had taken the instruction books.(https://bit.ly/3IamcSp)

A dump truck crashed into a home in Egg Harbor City, New Jersey on Monday morning. Police responded to a report of a motor vehicle crash on the White Horse Pike in the areas of Bremen Avenue and Antwerp Avenue around 7:30 a.m. Investigators say a man was driving west on the White Horse Pike when his Honda was struck from behind by a commercial dump truck. The impact forced his vehicle off the road. The dump truck, owned by Hammonton-based J. Domenico & Son Excavating, continued west on the White Horse Pike across eastbound lanes of traffic. After jumping the curb, the dump truck continued through a field and collided with trees in a wooded area before finally impacting a house. The homeowner was the sole occupant of the house. At the time of the incident, he was sitting on the first floor. The driver of the truck and 80-year-old occupant of the house were hospitalized with minor injuries and the investigation is ongoing. (https://bit.ly/3nHkLCM)

According to the Pasco County Sheriff’s Office, an argument escalated into a machete and gun fight. Pasco deputies responded to a call about a shooting near State Road 52 and Little Road in New Port Richey. They learned that an argument between 28-year-old Naquan Crawford and a man he knew had turned violent. According to an arrest report, the victim went into his bedroom during the argument and Crawford followed him. Crawford armed himself with a machete and stood in the victim’s doorway. When the victim demanded that Crawford leave, Crawford began swinging the machete. Crawford hit the victim three times — in the left hand, left chest, and the left side of the head. The victim drew his compact handgun, a Smith & Wesson bodyguard .380, and shot Crawford three times. The victim told deputies he owned the gun for protection and used it in self-defense. His statement was supported by evidence at the scene. Crawford said he confronted the victim in self-defense. Both men were taken to a local hospital with injuries that were not life-threatening. Pasco deputies arrested Crawford on the charge of aggravated battery with a deadly weapon. (https://bit.ly/3cGzmrH)