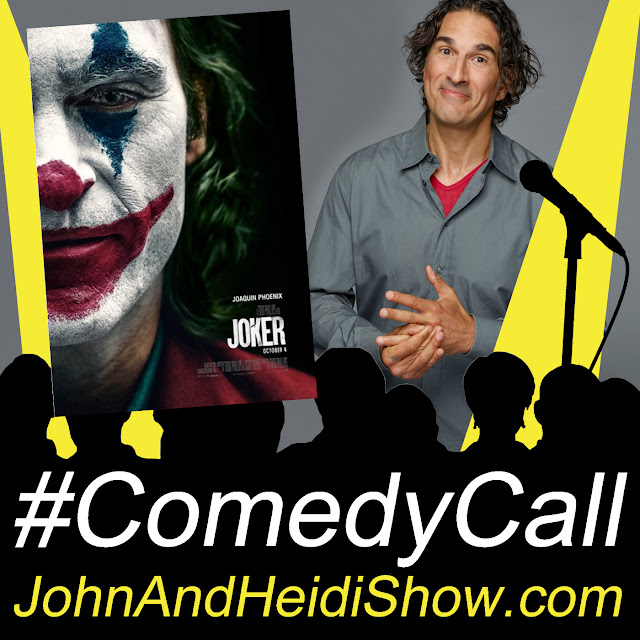 Today we have a #ComedyCall with Gary Gulman, a talented American comedian who has an exclusive style in stand-up comedy. He was the promising finalist of the popular NBC show, Last Comic Standing. He released his first CD album “Conversation With Inanimate Objects” in 2015. Since then, Gary Gulman has been part of every notable comedy television show. He has performed on Conan, Just For Laughs, The Late Show with Stephan Colbert. “Gary Gulman: Boyish Man" is the exclusive an hour-long comedy show by Gary Gulman, which has been telecasted since 2006 on Comedy Central. "It's About Time" and In This Economy" are two other famous other comedy shows by him. "All I Want for Chanukah Is Christmas," "No Can Defend," and "The Great Depresh” are some other albums by him.

Over 25 years in comedy, Gary Gulman has established himself as an eminent performer and peerless writer. It’s no wonder the New York Times wrote, “Gary is finally being recognized as one of the country’s strongest comedians.”

In 2019 he appeared in the international blockbuster Joker. He will next be seen co- starring with Amy Schumer in the upcoming Hulu comedy series, Life & Beth, and is currently touring and writing a memoir for Flatiron Books, tentatively titled K Through 12. GaryGulman.com

According to a survey, 1 in 5 Americans have been injured while setting up their Christmas tree. Of those who admitted they were injured by a Christmas tree, most were men

A woman in Louisiana has sued Heineken over their 0.0 Beer that contains as much as 0.03% alcohol. In the lawsuit, plaintiff Kathleen M. Wilson argues that "There are consumers who do not wish to ingest even the minuscule amount of alcohol contained in the product." According to Heineken's website, the beer has "an extremely small amount of alcohol, maximum 0.03% ABV," which is the same as "other food products such as bread, bakery products, and juices due to the natural fermentation of the ingredients." To use the "non-alcoholic" label, a brew must be less than 0.5 percent alcohol by volume (ABV). Wilson is requesting Heineken change the labeling of the product, and monetary damages as well as court costs. (https://ihr.fm/3GDHExA)

Critics are calling the much anticipated “Spider-Man: No Way Home” the best Marvel movie of all time. (https://bit.ly/3ILcDcZ)

Ben Affleck stated in a new interview that he’d still be drinking if he was married to Jennifer Garner. Affleck said that during his marriage he used to drink a bottle of whiskey and fall asleep on the couch. (https://pge.sx/3DZ2khQ)

Actor Nicolas Cage is playing a version of himself in a new movie. (https://bit.ly/3dT9tp4)

The Weather Channel continues to face criticism for airing reruns during a series of deadly tornadoes. (https://bit.ly/3E45wZk)

Bruce Springsteen sold his music catalog to Sony Music in a massive deal that could net the singer $500 million dollars. (https://bit.ly/3m9P8Au)

Kraft foods is responding to a nationwide shortage of cream cheese by paying customers to stop buying it. (https://cnn.it/3GQFJ8O)

A NASA spacecraft has made history by flying into the sun. (https://go.nasa.gov/321UEyk)

Scientists say a new super-powered telescope with infrared imaging could give them a new window into the universe. (https://cnet.co/3F7wC3e)

The Head of New York's Metropolitan Transit Authority was busted for using an inflatable passenger to ride in the carpool lane. (https://bit.ly/3GOW263)

A video has gone viral of a man punching a Connecticut School Board Member during a hearing. They were holding a hearing on whether to bring back the school's Native American mascot, the Tomahawks. (https://bit.ly/31Y00uC)

The French Government says that over 110,000 fake health passes are circulating in their country right now. (https://bit.ly/3259Ydc)

The Earth’s core is hotter than the surface of the sun.

A New Jersey man is facing up to twenty years in prison for taking hundreds of chainsaw parts meant for Amtrak projects and selling the pieces to buyers across the country, raking in thousands of dollars over eight years. Jose Rodriguez was brought up on charges of taking 114 chainsaws and hundreds of additional replacement parts and reselling them to turn a profit. He had been accused of selling the equipment directly to buyers or through online auctions. Rodriguez admitted to using the U.S. Postal Service to mail the pieces to buyers across the country between March 2012 and July 2020. In total, the government estimates the 49-year-old earned over $76,000 from reselling the parts. Federal prosecutors say the Ocean County man pled guilty before a U.S. district judge on one count of mail fraud. He had previously been charged with theft from an agency receiving federal funds and theft of government property. The longtime Amtrak employee had started with the transit agency back in 2007 and recently worked as a senior engineer and repairman out of North Brunswick, according to Acting U.S. Attorney Rachael Honig. The mail fraud charge carries a maximum fine of $250,000 and twenty years in prison. (https://bit.ly/3m13CTq)

A four-year-old boy left his Sydney family gob-smacked after ordering more than $1,000 worth of gelato on a food delivery app, including a personalized birthday cake and tubs of his favorite flavors. Christian King used his father’s phone to order $1,139 worth of gelato and cakes from Gelato Messina on UberEats on Monday. His father, Kris King, had given his son his phone to keep him distracted while his sister’s touch football match was happening. He said his son warned him he had “something on the way”, but he didn’t believe him until an UberEats delivery driver called his wife. It was at that moment he realized what was going on. “First of all, I thought it was $139. And then I really looked at it and it was $1,139 and we almost had a bloody heart attack. I flicked through the screen about 30 times. That’s how long the order was, it was like 99 cakes.” UberEats agreed to refund the order when King and his wife explained what had happened. (https://bit.ly/30yUdeg)

Conditions are never perfect. ‘Someday’ is a disease that will take your dreams to the grave with you…. If it’s important to you and you want to do it ‘eventually,’ just do it and correct course along the way. - Tim Ferriss

Volunteers Across The Country Are Helping Shovel Snow For The Elderly And Those In Need https://www.sunnyskyz.com/good-news