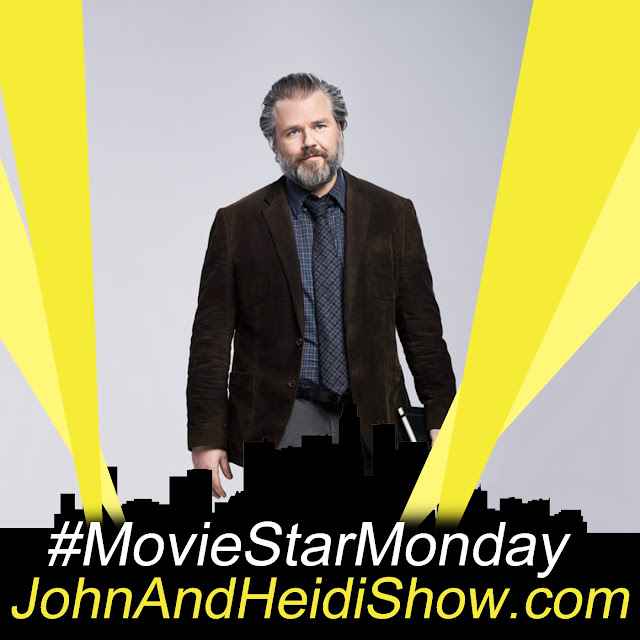 Today we visit with Tyler Labine. He plays Dr. Iggy Frome on the NBC drama "New Amsterdam." (TV SHOWS Deadbeat, Animal Practice, Mad Love, Sons of Tucson,Invasion,Reaper.... plus MOVIES Tucker and Dale vs. Evil, Rise of the Planet of the Apes, Super Troopers 2)

Labine's Dr. Frome is an attending child psychiatrist who likes to think outside the box but is continually beaten down by the hospital system. Labine can also be seen on the new season of the BBC America series "Dirk Gently's Holistic Detective Agency," starring opposite Elijah Wood and Samuel Barnett, as Sherlock Hobbs, the overly enthusiastic small-town sheriff. https://www.nbc.com/new-amsterdam

People who have an alcoholic drink or two a day may have a lower risk of becoming obese than either teetotalers or heavy drinkers. Researchers found that among more than 8,200 U.S. adults, those who said they enjoyed a drink every day were 54 percent less likely than non-drinkers to be obese. Similarly, those who drank a little more (two drinks per day) or a little less (a few drinks per week) had a lower risk of obesity than teetotalers did.

A drunken Florida woman stabbed her boyfriend with an 8-inch blade after he farted in her face during an argument, police say. Deborah Ann Burns, 37, allegedly knifed her lover of six years — Willie Butler, 53 — as they watched television in their Immokalee apartment. Burns told cops they were fighting about cash when Butler got up to go to the kitchen and broke wind on her head. She confronted him and things turned ugly — with Butler allegedly throwing a knife at her, which missed. Burns reportedly picked it up and threw it back and hit him in the stomach. She ran outside, before returning to hit him with a stick on his left arm. Cops arrived to find a bleeding Butler, who was so drunk he could not give a statement, standing in front of his mailbox. Burns, who denies cutting Butler, was arrested and charged with aggravated battery with a deadly weapon, reports 14News. She remains in custody on a $50,000 bond. https://www.nydailynews.com/

“John & Chrissy Sell Beverly Hills Home”
John Legend and Chrissy Teigen have sold their Beverly Hills home for $16.8 million. First listed in 2020 for $23.95 million, the home quickly sold but the sale fell through. They recently relisted the home at $17.7 million, and it sold again. John and Chrissy bought the 8,520-square-foot home from Rihanna in 2016. They bought a larger Beverly Hills home last September where they currently live. For more celebrity home news and home video tours, visit www.TopTenRealEstateDeals.com.

Being a new dog owner can be an adventurous time. A survey found the first year of dog ownership sees six pairs of chewed shoes and five emergency visits to the vet. The survey asked 2,000 American dog owners about the impact their four-legged friend has had on their lives, regardless of the growing pains. Respondents spent an average of $122.32 preparing their homes for the arrival of their fur baby. Owners also devoted 11 hours a week to training them. The survey revealed that within their first year at home, dogs went through 27 toys, destroyed four pieces of furniture, and slipped out of their leash six times. The average respondent also agrees their dog has also helped them heal three broken hearts. It’s no surprise 61 percent say their dog is a better judge of character than they are.

Almost all of us have made some mistakes with alcohol in our lives, usually when we were young and first getting a sense of how it affected us. You might think that when you get older, you’re pretty much out of the woods. Well, think again: a study found that excessive drinking in older adulthood — 65 years and up — can be incredibly damaging for your brain. Why the risk? Older adulthood is one of three “periods of dynamic brain changes” identified by the study — moments in life when your brain is changing and alcohol can do the most damage. As you enter old age, your brain starts to atrophy faster as your neurons become smaller and their component parts break down. When this is happening, drinking can start to do irreparable damage to your cognition.

Actor Bill Murray uses a 1-800 number instead of an agent or manager. Bill Murray is famous for starring in movies like the original Ghostbusters (1984) and Groundhog Day (1993). But anyone in Hollywood who's interested in working with him must first navigate a somewhat strange situation in order to get his attention. That's because the star uses a mysterious 1-800 number instead of an agent or manager. "You just call the 1-800 number," filmmaker Theodore Melfi, who directed Murray in St. Vincent (2014), told USA Today. "You have to record the message and send the message. I started calling once a week … He never called back. I finally called his lawyer and said, 'I'm trying [to] reach Bill.' And he goes, 'What number do you got?' And I go, 'I've got the 800 number.' And he goes, 'Well, that's what I got.'"

A British family of six brothers and sisters with albinism was awarded a Guinness World Record in the category of most albino siblings. Coventry, England, residents Naseem Akhtar, Ghulam Ali, Haider Ali, Muqadas Bibi, Musarat Begum and Mohammed Rafi received the title after Guinness World Records confirmed all six siblings were born with albinism, a genetic condition that causes a person to lack pigment in their skin, hair and irises. Naseem Akhtar, whose parents also have albinism, said she decided to apply for the record to celebrate the family being reunited after several months apart during the COVID-19 pandemic. "Over time, I have now come to like my condition because it makes me very unique. Being Asian but being white, it gives me a unique outlook on life, it gives me a very unbiased opinion of society and humanity," she told Guinness. "I like who I am, and the human being I became." https://www.upi.com/Odd_News/

A Georgia grandmother and her 6-year-old granddaughter were kicked out of their hotel room in the middle of the night after providing a three-star review, out of five, of the business. Susan Leger, 63, and her 6-year-old granddaughter were ready for bed on the first night of what was supposed to be a three-night stay in September at the Baymont Inn & Suites in the resort town of Helen, Georgia. At 8:40 p.m., her cell phone rang. It was the hotel manager, Danny Vyas, saying he had called police and they had to leave the room. “The man is screaming at me. He was saying, ‘You get out now. I call the police,’” Leger said. “My granddaughter’s like clinging to my leg and crying so hard. This was scary. This was just horrifying.” Vyas called 911 after Leger responded to an email from Hotels.com asking how she was enjoying her room. The grandmother gave the hotel three stars out of five and listed some complaints, writing, “Rundown. Pool’s not open. Toilet doesn’t flush well.” During the 911 call, Vyas can be heard telling the dispatcher, “We are getting ready to refund because they have reviewed that the room is dirty and the place is rundown.” “He was basically saying, ‘You get out… You lie. You gave me bad review.’ And I’m just sitting there going, ‘Oh my gosh, is this a prank call?’” Leger said. But Leger soon received a knock on her door from an officer with the Helen Police Department. He told her she and her granddaughter had to leave. Despite Vyas telling 911 they would refund Leger, who had paid for three nights in advance through Hotels.com, the grandmother didn’t receive her money back for months. The booking site told her refunds are not allowed, even though she was kicked out. “They couldn’t give me a refund, but they offered me some coupon towards a future thing. It’s like, ‘Forget it,’” Leger said. However, when WXIA contacted Hotels.com for comment on the story, the booking site provided Leger with a full refund, two months after the incident. Leger believes Hotels.com bears responsibility for her expulsion from the room. The booking site prompts guests to rate their room after checking in, a review that’s sent to management while you’re still in the hotel. “So, the only way to keep the room in my mind is not to have answered Hotels.com’s request,” Leger said. “If you don’t want to be walking in your pajamas with your 6-year-old granddaughter, don’t leave a review if you’re currently still at the place.” Most businesses, including hotels, are allowed to ask customers to leave for virtually any reason. If they refuse, customers can be arrested for trespassing. Vyas told 911 that Leger refused to leave, but Leger says she never said that. Georgia has a special law requiring sufficient notice to hotel guests before kicking them out, but there is an exception for “cause, such as failure to pay sums due, failure to abide by rules of occupancy, failure to have or maintain reservations, or other action by a guest.” https://www.wvlt.tv/

STRANGE BOOKS YOU CAN ACTUALLY BUY ON AMAZON

• How to Avoid Huge Ships https://amzn.to/3qBcfFK

• Who Cut the Cheese?: A Cultural History of the Fart https://amzn.to/3eFar8V

• How Green Were the Nazis? https://amzn.to/32RHtzT

“Ned, I would love to stand here and talk with you—but I’m not going to.” - Phil Connors (Bill Murray), Groundhog Day

Teen Has Performed a Random Act of Kindness Every Day Since the Start of the Pandemic https://www.goodnewsnetwork.org/