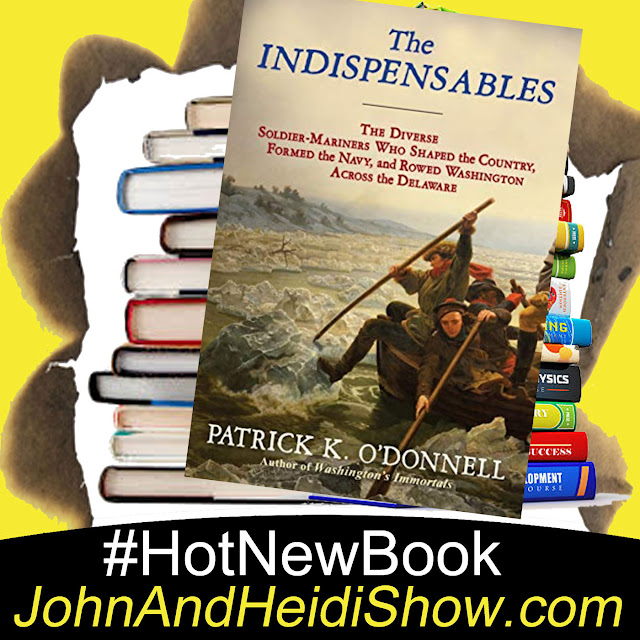 Today we visit with critically acclaimed military historian Patrick K. O’Donnell. He has a new book called THE INDISPENSABLES: The Diverse Soldier-Mariners Who Shaped the Country, Formed the Navy, & Rowed Washington Across the Delaware. https://amzn.to/3ze1zkc

Here’s a study that throws some serious support behind the idea that no one should work on their birthday. Researchers at UCLA found older patients who undergo emergency surgery on their surgeon’s birthday were more likely to die within a month than others who had the same or similar procedures on different days. Among surgery patients over age 65, mortality rates were a whopping 23 percent higher among those treated on their surgeon’s birthday. Study authors speculated these highly skilled doctors may be distracted during surgery due to turning one year older, but it’s just a theory.

One Friday, Amanda Smithfield, a librarian at Hume Fogg Academic High School, counted 38 party vehicles pass by the school during school hours. She, along with other teachers and even students, is calling for the passage of recently introduced legislation to regulate Nashville’s party vehicle scene. “It makes me angry. It makes my blood boil when kids come to me and say I was in the middle of my AP world test, and, you know, there was this disruption, and I was trying to answer a difficult question and I lost my train of thought,” Smithfield said, adding that students will be taking the ACT next week, and due to the loud party tours, administrators will have to try to find a quiet spot away from Broadway and 8th. Metro Council Member Freddie O’Connell’s bill comes after growing pressure from Safe Fun Nashville and other community members in light of recent accidents on party vehicles. The coalition’s petition, which calls for state and local legislative action, has amassed over 2,500 signatures. The student group, “Hume Fogg for Peaceful Learning,” recently launched an Instagram account to share first-hand accounts of the regular disruption party vehicles create to the school day. “One of my students told me she was flashed by someone on a pedal tavern very recently,” Smithfield said. She says though she understands tourism is vital to Music City and even the funding that public schools receive, something needs to change and fast. She’s hoping the party vehicle bill will pass and in turn, local leaders are able to regulate where and what time the party tours roll. “Maybe between 8:00-3:00 they don’t run in front of the school. That makes sense to me,” Smithfield said. “Maybe Sunday morning they don’t go in front of First Baptist Church downtown. That makes sense to me.” O’Connell’s bill that would help to regulate transportainment in downtown Nashville passed the first of three readings and will head to the second reading in front of Metro Council on October 5 at 6:30 p.m. https://www.wkrn.com/

Pierce Brosnan gave it a year but has decided to cancel the sale of his $100 million Malibu home. Pierce and wife, Kelly Shaye Smith, built the almost 13,000-square-foot compound on property they purchased in 2000, then spent ten years to finish and gave it the name Orchid House. The interior is comprised of five bedrooms, fourteen baths, dining with fireplace, a gourmet kitchen also with fireplace, butler’s pantry and custom wine storage. For more celebrity home news and home video tours, visit www.TopTenRealEstateDeals.com.

The Department of Homeland Security is launching a "bug bounty" program, potentially offering thousands of dollars to hackers who help the department identify cybersecurity vulnerabilities within its systems. DHS will pay between $500 and $5,000 depending on the gravity of the vulnerability and the impact of the remediation, Homeland Security Secretary Alejandro Mayorkas announced Tuesday. "It's a scalable amount of money but we consider that quite significant," he said, speaking at the Bloomberg Technology Summit. "We're really investing a great deal of money, as well as attention and focus, on this program." Hackers will earn the highest bounties for identifying the most severe bugs, DHS said. Some private companies offer much higher bounties for uncovering vulnerabilities. For instance, payouts from Apple range from $25,000 to $1 million and Microsoft offers up to $200,000. https://www.wrcbtv.com/story

Blue Whale calves grow 200 pounds per day for the first year they are alive. They can move at a brisk pace of five miles per hour when fully grown, but can get up to 20 miles per hour if need be. They can also hear up to 1,000 miles away in the ocean.

England museum scientists discover more than 550 new species in 2021. A roly-poly monochromatic beetle. A fan-throated lizard. A rice rat that may be an example of island gigantism. And two crocodile-faced dinosaurs. These are some of the more than 550 species that researchers at the Natural History Museum in London discovered in 2021, despite COVID-19 restrictions. The museum's largest discoveries were two carnivorous dinosaurs dug up on the Isle of Wight in the United Kingdom. https://www.livescience.com/

As the world evolves, words follow, which is why Merriam-Webster has added 455 new ones to the dictionary this month. TBH, many have emerged from the COVID-19 pandemic that has shaped so much of people's lives over the past 20 months. In 2020, the English word of the year was not surprisingly "pandemic." This year, "digital nomads" who want to avoid "super-spreader" events where they might incur a "breakthrough" infection can circle the globe with their "vaccine passports" and hopefully avoid "long COVID." And Merriam-Webster says that's all OK, as far as the new winning Scrabble words go. As uncertain as such a life might be, there's a fresh menu of dishes highlighted in the latest dictionary additions that can help ease transitions into a post-pandemic world, although some may be wary of developing a "dad bod." (Yes, that's in there, too). The new words are grouped into categories for online culture and communications, the coronavirus, tech and science, pop culture, medicine, politics and food. According to the wordsmiths, you could begin your day with a "chicharron," the tasty fried pork belly snack, or some "goetta," which is meat mixed with oats, onions and spices that comes in the form of a patty. They might be prepared in an "air fryer," or not. But it could be washed down with a refreshing "horchata," the cold, sweetened drink made from ground rice or almonds and flavored with cinnamon. And the entire Merriam-Webster-approved meal can now be wrapped up with some delicious "fluffernutter," the white bread sandwich containing peanut butter and marshmallow crème. Of course, these regional food terms are not exactly new. Chicharron and horchata are stables in Latin America, while goetta, which is of German origin, has been celebrated as a tasty cousin of scrapple. The fluffernutter got some attention in 2013 when Sen. Mitt Romney celebrated his 66th birthday with one. The CNN headline at the time: "Romney's having his fluffernutter and eating it too." https://www.wrcbtv.com

• I was going downhill.

• I didn’t know you were around.

• But I had my cruise control set at such and such.
• Your radar must be wrong.
• I’m on vacation.
• I was trying to get to a rest room.

“Never follow anyone else’s path. Unless you’re in the woods and you’re lost and you see a path. Then by all means follow that path.” - Ellen DeGeneres

Huge Supply of Water Discovered on Mars, Frozen at the Bottom of its Grand Canyon. https://www.goodnewsnetwork.org/