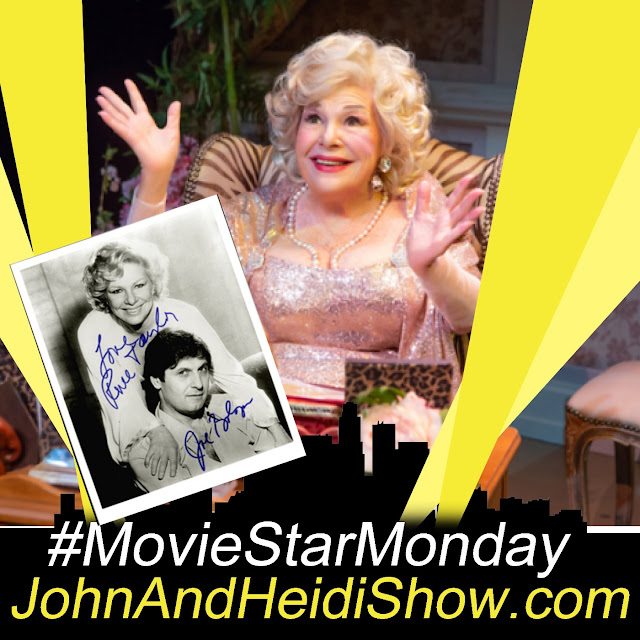 This #MovieStarMonday we visit acting legend Renee Taylor. In 1968, Taylor played an actress portraying Eva Braun in Mel Brooks' feature film The Producers. Taylor and her husband, Joseph Bologna, co-wrote the Broadway hit comedy Lovers and Other Strangers and received Oscar nominations for having written the 1970 film adaptation. In 1971, the couple co-wrote and starred in the film Made for Each Other. Taylor is most often recognized for her role in The Nanny. In recent years, Taylor has guest-starred as Ted Mosby's neighbor, Mrs. Matsen, on How I Met Your Mother. She also had a guest-starring role on the Disney show, Shake It Up and many other amazing projects! Taylor has worked as a voice actor in the animated feature film Ice Age: The Meltdown, and in a recurring role in the animated Fox series Bob's Burgers. Taylor also played Martha Benson in the film Opposite Day, released in 2009. In 2016, Taylor starred in the Netflix movie The Do-Over with Adam Sandler as the role of Mrs. Kessler and in the TV show Rock in a Hard Place. Recently, Taylor appeared in the 2017 film How To Be A Latin Lover. Taylor recently had a role in Tango Shalom, which she acted alongside her husband, in his final film role before his death. https://www.youtube.com/watch?v=R6w9qkvKca8

National Save The Eagles Day

While the holidays often see a surge in sales for Amazon’s Alexa devices, according to internal data obtained by Bloomberg, there are years when 15 percent to 25 percent of new Alexa users are no longer active within just their second week of using the device. The data show that many people don’t tap into the deep list of features offered by the devices, instead treating them as just an alarm or timer.

Niagara Falls, Ontario, Canada. This one comes under the heading of it’s always a good idea just to mind your own business. The cops had pulled over a driver on suspicion of DUI. Our bozo, who had no connection to the driver, approached the officer, began video recording the scene, and started shouting obscenities. The cop cautioned him and this seemed to further agitate our bozo, who then spat in the officer’s direction. Bad idea. He fought back as the officer tried to arrest him. Backup was called and our bozo was hauled away, charged with obstructing a police officer, assaulting a police officer, resisting arrest, and violation of probation.

“Doris Day’s Carmel Home Is Beautiful, Butter Yellow & Sold”
Many still remember the late Doris Day for her Christmas albums and shows when she sang all the holiday favorites and the whole family huddled in front of the television with a roaring fire in the fireplace. Though she might have been singing about Christmas with snow falling and people enjoying the store window decorations in the city, she was living in California’s endless sunshine with her beloved dogs and cats in Carmel. Doris Day's cheerful yellow house in one of the state’s most charming towns was listed at $7.4 million, but with a price reduction, it has recently sold for $5.7 million - a little over two years after her death. As she wished, all proceeds will go to the Doris Day Animal Foundation. This is the house where Doris lived for forty years until her death in 2019 at age 97. Sited on nine acres atop a knoll, the 7,000-square-foot home overlooks the Carmel Valley and the Quail Lodge Golf Course. Doug and Lisa Steiny of Sotheby’s Carmel Rancho Brokerage held the listing. For more celebrity home news and home video tours, visit www.TopTenRealEstateDeals.com.

Scientists solved the problem of how to wrestle the lid off a jam jar. After a lengthy trial, researchers in the Netherlands published their solution: don’t screw the lid on too tightly in the first place. A research team (Delft University of Technology) enlisted 750 volunteers to open jars in an effort to crack the problem. They discovered that the ideal tightness was a torque of 2 newton-metres — tight enough that the seal would not break prematurely, but loose enough for most people to take off the lid.

If people who run all the time make you LOL, there’s a reason to make fun of their certifiably crazy habits: In a review of 15 years’ worth of studies on the health benefits of running, researchers found that you don’t have to run all that much to max out on running’s health benefits. Lacing up just once or twice a week for just 50 cumulative minutes — no more than 6 miles per week — provides plenty of protection against cardiovascular disease, chronic disease, and early death by any cause. Running will certainly benefit your health but you need to look at what you’re eating too. Dieticians say it’s a myth that running will automatically result in weight loss. So remember the 80-20 rule: weight loss is 80 percent diet or nutrition and 20 percent exercise.

A study found Pittsburgh is the dog poop capital of the U.S.

Sally Hollingworth and her husband Neville were hunting for marine fossils in Wiltshire when they came across the remains. Their find will be discussed on a BBC program featuring Sir David Attenborough. Mrs Hollingworth said the couple used a Neanderthal hand axe found at the site to cut their wedding cake. It was the discovery of the axe that led Mr and Mrs Hollingworth to believe they might have stumbled across a significant find. In total, the remains of five mammoths - two adults, two juveniles and an infant - were discovered but Mr Hollingworth believes there may be many more animals buried at the site, near Swindon. https://www.bbc.com/news/uk-england-wiltshire-59828850

A man accused of cursing, ‘flipping off Jesus,’ and causing a disturbance inside a Knoxville church on Sunday was later charged with disorderly conduct. Officers responded to First Baptist Concord Church around 11 a.m. where they said they found Anthony Beiler, 23, “cursing and flipping off Jesus and causing other parishioners to become afraid,” an incident report said. When officers asked Beiler to leave the church sanctuary, they said he refused. A police report indicates Beiler became verbally and physically combative forcing officers to restrain him and carry him out of the sanctuary. Beiler was taken into custody for disorderly conduct. https://www.wvlt.tv/app/2021/11/18/knoxville

What is the worst thing you’ve ever witnessed a co-worker do?
That was what a staffing company wanted to find out. Their survey of 430 office workers discovered some of the worst office courtesy blunders, including:

• a worker snapping a picture of a coworker sleeping at her desk, and then sending to the boss.

• a coworker spotted purposefully sneezing into the boss’ coffee.

• a coworker clipping their nails at their desk.

• a coworker walking around the office barefoot

“Before you marry a person, you should first make them use a computer with slow Internet to see who they really are.” - Will Ferrell

Miracle Preemie Baby Born the Size of an iPhone Came Home For Christmas After a Year of Fears That He May Not Survive. https://www.goodnewsnetwork.org