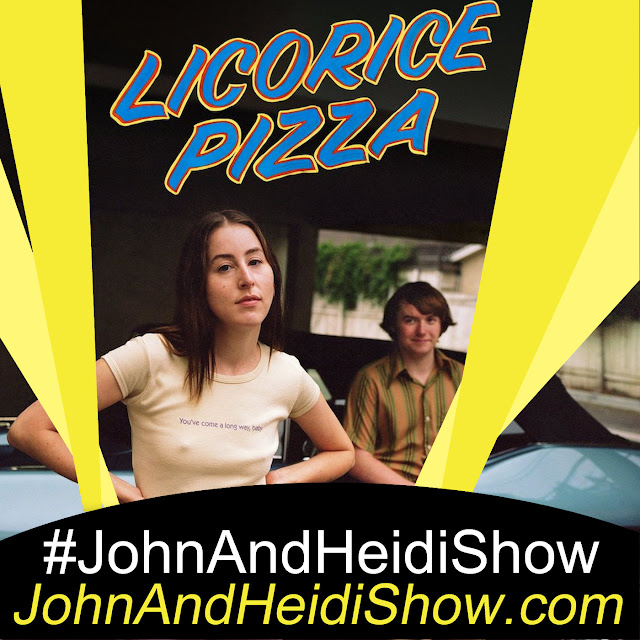 Today we visit with Alana Haim, guitarist and one of the founders of the indie rock band Haim. Alana Haim is also bestie to Taylor Swift... in fact they both recently celebrated their mutual birthdate together. We're going to talk about her new movie LICORICE PIZZA. https://www.unitedartistsreleasing.com/licorice-pizza/

A study finds walnuts to be great for healthy aging.

Research shows that people who multitask between multiple screens are more likely to have emotional issues.

(BEST OF 2021) After thorough investigation, Turkish police found no actual criminal activity involved here, but the bozo level is high enough to merit mention. From Cayakka, Turkey, comes the story of a man who was reported missing by his friends. Our bozo, who was in town for a construction project, went out for a night of drinking with his co-workers. The next morning his friends thought he had drunkenly wandered off into the woods and a search party was quickly organized. Meanwhile, our bozo, who had gone to a friends villa to sleep it off, awoke and noticed all the activity outside. The searchers told him they were looking for a missing man, and our bozo, being a good citizen, joined in the search. It was not until he heard other searchers calling his name that he realized “Oh, that’s me.” Police interviewed him and released him with no charges being filed.

James Gandolfini gifted his co-stars on The Sopranos a total of $500,000 after his dispute with HBO. The late Emmy Award-winning actor is best known for his iconic portrayal of the depressed mobster and angst-ridden father on all 6 seasons of HBO's cultural touchstone series, The Sopranos. The show's recurring cast also includes Edie Falco as Tony's wife, Carmela, and Jamie-Lynn Sigler as their daughter, Meadow, and Robert Iler as their son, AJ. Michael Imperioli stars as Tony's protégé, Christopher Moltisanti, and Dominic Chianese as his Uncle June. Tony's two closet associates in the mafia, Silvio and Paulie, are played by Steven Van Zandt and Tony Sirico. https://screenrant.com/sopranos-james-gandolfini-hbo-contract-dispute-costars-payment/

If you see two people laughing at a joke you didn’t hear, chances are you will smile anyway — even if you don’t realize it. According to a study, laughter truly is contagious: the brain responds to the sound of laughter and preps the muscles in the face to join in the gaiety.

Never mind how careful you are behind the wheel or how long you’ve been driving, the signs of the zodiac may be bigger factors behind your ability to avoid car crashes — or why you have too many. According to a study (by InsuranceHotline.com) astrological signs are a significant factor in predicting car accidents. The study, which looked at 100,000 North American drivers’ records over a six year period, puts Libras (born September 23-October 22) followed by Aquarians (January 20-February 18) as the worst offenders for tickets and accidents. Leos (July 23-August 22) and then Geminis (May 21-June 20) were found to be the best overall.

LOOK WHAT I FOUND ON CRAIGSLIST “I’m selling a new, 5-pounds canister of coca-butter lotion. Over the last year I used another 5-pound canister just like it and really enjoyed the comfort it provided. There is nothing wrong with the canister I’m selling, I just feel it’s time to try a new brand. If there’s an emptiness in your life, or just need the occasional pick-me-up, this cocoa-butter lotion will do the trick. I will also include a free electric heating pad, which is used but in very good condition.”

A teenager tried to rob a 71-year-old woman in Germany. He didn’t succeed. The woman decked him with “an amazing hook” to his face — and it really hurt, he said. She said, “My hand was swollen all night but I enjoyed it. I got that kid right on the mark. He got his punishment straight away.”

He’s making a splash! An ex-model is crediting his youthful appearance to drinking his own urine, flushing it into his rectum, and rubbing it onto his skin. Troy Casey traveled the world posing for high-fashion labels, including Versace, back in the 1980s and 1990s before becoming a life coach. The 55-year-old says he’s been able to maintain his model looks and physique thanks to a daily dose of his own pee. “I drink my own urine every morning — I call it hair of the dog!” Casey proclaimed in an interview with News Dog Media. “The feeling is electric.” The former fashion darling first heard about urine therapy — known as Shivambu in Ayurvedic medicine — back in 2004. Soon after, he decided to sample his own pee and was pleasantly surprised. The resourceful health guru now uses his urine in other ways as well. Casey claimed he bottles his pee, lets it “ferment” and uses it in an enema. The former model also uses his urine as a moisturizer, which he believes helps maintain his appearance. Casey — who previously hit headlines for claiming there were health benefits to sunning his anus — has more than 120,000 Instagram followers who look to him for unorthodox wellness advice. (https://bit.ly/3Flwqxj)

• Some guy sent me a text asking when his order of 10,000 face masks were coming in.

• On a work phone, a lady said she’d be at the airport around 3PM. I said OK and thought nothing of it. Got a text around 4PM getting cussed out.

• Hey man, I got the stuff. When are you gonna meet me?

Child's Lost Christmas Gifts Returned After Being Found On Side Of Road
https://www.sunnyskyz.com/good-news/