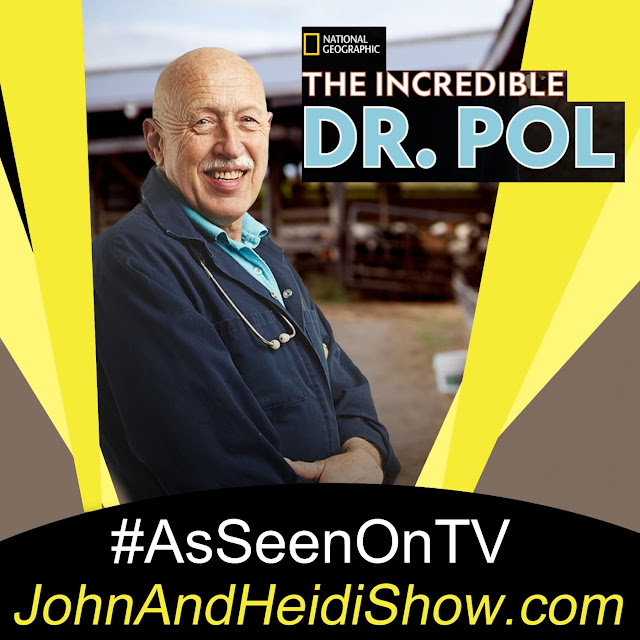 Today we visit with Dr. Jan Pol... we'll talk about the 20th season of “The Incredible Dr. Pol” currently airing through March 5, and all previous seasons stream on Disney+

A study found couples with similar jobs are more likely to have trouble finding a good work-life balance than those in different lines of work. Researchers (from the University of Bedfordshire) questioned 291 academic workers whose partners had jobs in education and 350 academic employees whose partners had another type of job. Couples with similar jobs had more problems with work-life balance, worked longer hours and were more dedicated to their job than those whose significant other had a different type of job.

Italian researchers say that contagious yawning occurs at a faster rate among friends and family than strangers.

A study (University of Minnesota) found men make more impulse purchases, borrow more money and save less when they think they outnumber women. The study asked men to read news articles suggesting their local population had either more men or more women. When articles suggested a surplus of men, the savings rate among study participants fell 42 percent and the men indicated they were willing to borrow 84 percent more each month. Researchers said: “It turns out we have a lot in common with other animals. We see that there are more men than women in our environment and it automatically changes our desires, our behaviors, and our entire psychology.” In other words, to compete more men may spend more.

Not even Andrew Garfield’s “Amazing Spider-Man” costar (and former girlfriend) Emma Stone knew about his involvement in “Spider-Man: No Way Home”. Garfield famously kept hush-hush about his appearance in the film — and that rule extended to Stone. In a podcast appearance, Garfield said that Stone “kept on texting me. She was like, ‘Are you in this new Spider-Man film? ‘And I was like, ‘I don’t know what you’re talking about.’ Then, according to Garfield, “She saw it. She was like, ‘You’re a jerk.'”

“Michelle Pfeiffer Does Fast Sale In Pacific Palisades” A new home that Michelle Pfeiffer bought less than two years ago in Pacific Palisades for $22.25 million has already sold for $25 million. Michelle and husband, David E. Kelley, have been active in the real estate world, also recently selling a Silicon Valley home for $22 million. They also own at least two other homes. For more celebrity home news and home video tours, visit www.TopTenRealEstateDeals.com.

A black diamond that’s literally out-of-this-world will go to the highest bidder at Sotheby’s next month. The record-breaking, 555.55-carat gemstone, named “The Enigma,” has been ranked among the largest and toughest diamonds in the world. And little wonder — it’s thought to have dropped from outer space millions of years ago. Black diamonds like this, also called carbonados, are formed by a meteoric impact to Earth, or from the asteroid itself, according to Sotheby’s. The House of Gübelin in Switzerland and the Gemological Institute of America both have declared it the largest known of its kind, and it was first listed by Guinness World Records in 2006. The 1-billion-year-old diamond is expected to fetch at least $6.8 million when it goes up for auction from Feb. 3-9.

Popular weight-loss plans like the keto and paleo diets may help you lose weight, but they could also lead to long-term health problems. A recent study in France suggests low-carb diets can harm a dieter’s gut health. The gut is home to trillions of microorganisms needed for important bodily functions such as immunity and communicating with the brain to regulate your mood. Your diet shapes the composition of your gut microbiome. Previous research has shown that unhealthy and processed foods reduce the diversity of gut bacteria, leaving “bad” bacteria that can make you sick. The new research, which appears in the American Journal of Clinical Nutrition, shows that a healthy gut is supported by a balance between all food groups. Study authors concluded that having a rich diversity of foods in your daily diet is more important to gut health than focusing on individual components of a diet such as protein or fiber.

People spend at least 3 years of their lives on the toilet.

Seven million phones are dropped in the toilet each year in the U.S. alone.

Americans use a lot more toilet paper than any other country: 7 sheets on average.

A woman in China is facing charges after allegedly assaulting an apartment building superintendent with a mop. The super confronted the woman after he saw her mopping the walls in the building’s hallway. The woman began cursing at the man claiming he was harassing her and hit him in the head with the mop after he followed her to the laundry room.

Five stars is just about the best rating a luxury hotel can get, but this canine inn deserves 6…bones, according to happy dog owners. Cape Town, South Africa’s Superwoof Dog Hotel & Daycare provides the pooches of well-to-do South Africans with the kind of luxury treatment that even many humans in the country can only dream of. Some of Superwoof’s amenities include 24-hour supervision, splash pool, and long walks in the beautiful countryside of nearby Franschhoek valley, in the country’s Western Cape wine-growing region. More? Among the hotel’s highlights is dog champagne — “champaws” — basically water with herbs in a champagne bottle. We’re not sure if the mutts really appreciate that status symbol…or the fine jazz pumped throughout the facility…or if with their notoriously poor long-distance vision, what the dogs make of the view of Table Mountain from the Sky Deck. The facility has been providing luxury pet boarding service for well-do-do South Africans for 1½ years. How much to treat your dog like a king for a day? Just 165 South African rand…or $11 US.  LINK: https://youtu.be/3axtpgszDkY

In a survey, the top reasons people quit over a bad boss:

“Marriage is like an unfunny, tense version of Everybody Loves Raymond, but it doesn’t last 22 minutes. It lasts forever.”

Little Girl Takes Her First Steps After Doctors Said She Would Never Walk On Her Own  https://www.sunnyskyz.com/good-news