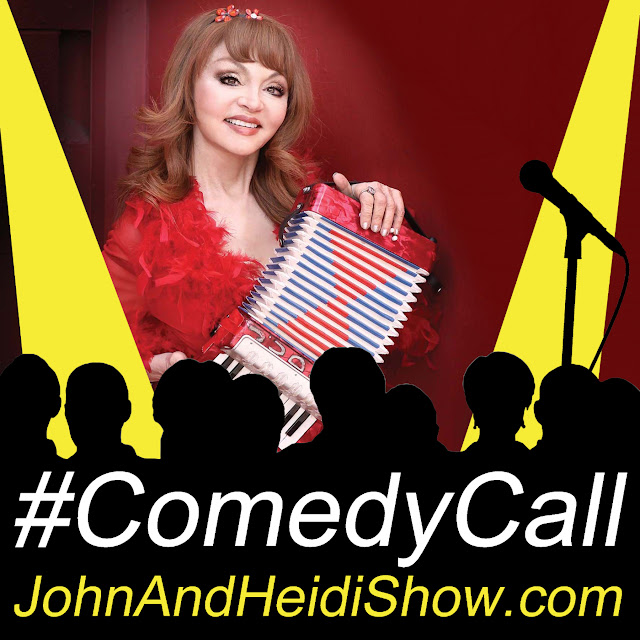 Today we visit with the very funny Comedienne Judy Tenuta. For the last year, while the world dealt with the pandemic, Judy Tenuta, best known to fans as "The Love Goddess" and "Aphrodite of the Accordion," has been battling stage 4 ovarian cancer and, or as she puts it in her recent viral video, is "Kicking Cancer's Ass," shot entirely during isolation and quarantine at home.

In addition to that, we will chat about the re-release of the hilarious 1998 cult movie spoof, Desperation Boulevard https://amzn.to/3rmoPKi

National Shower with a Friend Day

According to a survey, 9 percent of adults vacuum once a day, 28 percent two to three times a week; and the majority about once a week.

A survey found that 4 out of 10 people avoid having friends and family over because their place is such a mess.

A poll suggests that people spend an average of 44 minutes a week thinking about regrets.

If you’ve ever felt that a work meeting sucked IQ points right out of your skull, you might be right. A study found that group interactions can actually lower your intelligence. Scientists in Virginia matched groups according to IQ, ranked members’ performance on cognitive tasks against the others, and then revealed the rankings. When group members were told how others had performed, they saw dramatic drops in the ability of some study subjects to solve problems. Basically, that implies that feeling like you’re not as smart as others may actually have an impact on your brain and make you less able to solve problems.

Daniel Radcliffe has been cast as the lead in the upcoming biopic, “WEIRD: The Al Yankovic Story”. Tongue-in-cheek, producers say the biopic will hold “nothing back, exploring…Yankovic’s life, from his meteoric rise to fame with hits like ‘Eat It’ and ‘Like a Surgeon’ to his torrid celebrity love affairs and famously depraved lifestyle.” In a statement, Weird Al said: “I am absolutely thrilled that Daniel Radcliffe will be portraying me in the film. I have no doubt whatsoever that this is the role future generations will remember him for.” Production begins next month.

“Elizabeth Taylor's Home Gets $11 Million – But Faces Wrecking Ball” Elizabeth Taylor's home in L.A.'s Bel Air neighborhood that she bought from Nancy Sinatra in 1981 and lived the rest of her life just sold for $11 million. The 7,000-square-foot home is likely to be demolished and replaced with a much larger home. For more celebrity home news and home video tours, visit TopTenRealEstateDeals.com.

These days, you can’t open social media without seeing a post showing several rows of grey, yellow, and green squares. “Wordle” is the new word puzzle that’s taken the internet by storm. But why has it become so popular, so fast? Psychologist Sebastian Ocklenburg says many people love a challenge, but don’t have time for a puzzle that requires more than a few minutes, so it’s a perfect fit in today’s world. Not only that, unlike other games, like Sudoku or crosswords, in Wordle, performance feedback is given instantly. People are competitive by nature, and the ability to post your results (how many tries did I need today?) and compare them to others is another key to Wordle’s success. That’s right…we’re just looking for “likes”. Research shows that likes on social media are seen as a numeric representation of social acceptance, and the brain reacts to likes similarly to the way it reacts to winning money. Another aspect of Wordle’s popularity may lie in so-called “downward social comparisons”. That’s when you discover that your performance is superior to someone else’s. If you solved the Wordle in 2 tries, and see that another person needed 5, it makes you feel accomplished, smart, and successful, and may motivate you to play again. (And again. And again…) On the other hand, if you discover that others were better than you, could engage your competitive side, so you try again. (And again. And again…) https://www.powerlanguage.co.uk/wordle/

Females takes 3 times longer than males in the bathroom.

A rough estimate of the number of snow crystals that fall to Earth per year is about 1 followed by 24 zeros.

A typical snow crystal weighs roughly one millionth of a gram. This means a cubic foot of snow can contain roughly one billion crystals.

The number of cubic feet of snow that falls on the planet each year is about 1 followed by 15 zeros (a million billion).

In Germany, police were conducting a spot check, looking for drunk drivers. They had pulled over one car and were talking to the driver when another car pulled up. Thinking perhaps there was a problem, he stopped and asked the officer if there was anything he could do to help. And in a way, he did help. Turns out the man was drunk and had just pulled himself over.

Frédéric Prinz von Anhalt, AKA the widower of actress Zsa Zsa Gabor, needed a new heir to inherit his estate and preserve his royal lineage, so he chose to adopt — an adult! 78-year-old von Anhalt has no children, so he plans to adopt 27-year-old Kevin Feucht. Kevin’s new last name will come with a few responsibilities. He has agreed to take care of his new step-dad, by cooking for him, doing chores around the house and making sure his bills are paid on time. It’s interesting because Frédéric was also adopted by a well-known princess in Germany when he was 35 . . . which is how he became a prince.

WHAT’S THE WORST QUESTION TO ASK ON A FIRST DATE?

• How are we related again?

• Have you told anyone where you are right now?

• Want to make thousands each month while being your own boss?

“Being a mom means never buying the right amount of produce. Either everyone suddenly loves grapes and a week’s worth are eaten in one afternoon, or fruit flies are congregating around my rotting bananas.”

—Lessons from the Minivan