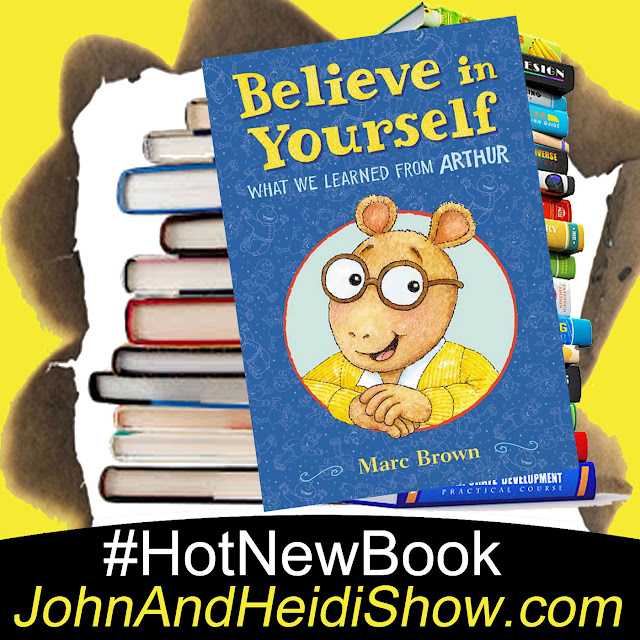 Today we visit with Marc Brown, the creator of one of the world’s most iconic and enduring children’s book and television characters—he is author-illustrator of the bestselling Arthur Adventure book series (since 1976) and creative producer of the number-one children’s PBS television series “Arthur.” Just in time for the 25th and final season of the animated series, master storyteller Marc Brown shares the funniest and most heartfelt moments from the longest running children's television show in US history and classic book series in his new book BELIEVE IN YOURSELF: What We Learned from Arthur. https://amzn.to/3u9xpOy

Nearly 61% of US digital shoppers surveyed said they abandoned a cart because of site errors or crashes, and nearly as many bailed because the site required them to create an account.

The government says that up to ten percent of Americans lack decent Internet service.

Monday (January 31) was Bubble Wrap Appreciation Day. The story begins in 1957 in a garage in Hawthorne, New Jersey, with two engineers, Marc Chavannes and Al Fielding. Marc and Al were trying to make a plastic wallpaper with a paper backing. Surprisingly, this product didn’t take off. They realized, however, that their invention could be used as a cushioning packaging material. At that time, only abrasive paper products were used for packaging, and they did not suffice for cushioning heavy or delicate items. Marc and Al raised $9,000 to fund a developmental production line. They incorporated their bubble wrap company, Sealed Air Corporation, in 1960.

“Ryan Seacrest's $10 Million Discount”
Ryan Seacrest has reduced the asking price on his 8,628-square-foot Beverly Hills home from $85 million to $74.5 million. Seacrest bought the 1963-built home with city and ocean views in 2012 for $36.5 million and then spent millions more to update and remodel. The entire estate includes three acres and extensive gardens, four bedrooms in the main home plus two guest homes and an underground garage. For more celebrity home news and home video tours, visit www.TopTenRealEstateDeals.com.

Want to save $200 this year? Researchers say backing way off on using your clothes dryer can do just that. Visit your favorite retail store or Amazon and ask for a clothes drying rack. The money you save could cover your phone bill for a few months.

Red or white? Wine experts cannot tell. A French study fooled 54 expert wine tasters with a white wine that had been colored red. The study found that the wine drinkers based their views as much on color and labels as upon a wine’s bouquet and flavor.

That morning cup of coffee may help ease post-exercise muscle soreness. In a small study of female college students, researchers found that a caffeine supplement seemed to lessen the muscle pain that crops up a day after a challenging workout.

While cheeseburgers, fries and beer put us in a temporary good mood — they are sooo good! — after the meal ends the food is still with us, often bringing our mood down. Adults were asked to name the foods they know don’t help their mood and, well, doctors mostly agree. Adults ranked their bad mood foods in order: Donuts, alcohol, energy drinks, burgers, sweets, pizza, cake, white bread, fries, chips, chocolate, ice cream, ‘fat free’ salad dressings, and pretzels.

During WWII, Hershey made a chocolate bar for U.S. soldiers that was meant to taste so bad, soldiers would only eat it if they were starving.

Caffeine is more addictive than marijuana.

It takes 120 litres of water to make one glass of wine.

Thieves in Romania allegedly demolished a home then stole it brick by brick while its owner was out looking for a job. Four people were arrested. The owner of the house had left early in the morning to travel to a neighboring city to look for work. The owner came home to a pile of rubble.

Regardless of whether you’re in an office or a cubicle, your chair’s location and direction plays an important role in your workspace. In order to feel calm and comfortable, the Harvard Business Review recommends facing your desk chair at the entry of your workspace. In general, humans are more comfortable when their backs aren’t exposed to passersby. As HBR points out, if you’re in a cubicle where it doesn’t seem like you can orient your chair toward the entrance, you should try and make your side face the entrance as opposed to your back. Even a slight adjustment will make a big difference in your psychological comfort.

WORST EXCUSES FOR BEING LATE

The famous Career Builder “Most Outrageous Excuses for Being Late” survey found 16 percent of employees are late for work at least once a week. The most popular excuse: traffic delay, followed by lack of sleep and bad weather.
• Employee said he was late because he had no intention of getting to work before 9AM. His start time was 8AM.
• Employee’s cat had the hiccups
• Employee believed his commute time should count toward his work hours
• Employee claimed a fox stole her car keys
• Employee had to take a personal call from the state governor (turned out to be true)

• Employee was late because of a job interview with another firm
• Employee thought she had won the lottery (she didn’t)
• Employee’s angry roommate cut the cord to his phone charger, so it didn’t charge and his alarm didn’t go off
• Employee’s leg was trapped between the subway car and the platform (turned out to be true)
• Employee got distracted watching the Today Show.

“I always say to people who want to be rich and famous: 'try being rich first'. See if that doesn't cover most of it. There's not much downside to being rich, other than paying taxes and having your relatives ask you for money. But when you become famous, you end up with a 24-hour job.” - Bill Murray

Street Musician Whose Drums Were Stolen Gets A New Kit From Metallica
https://www.sunnyskyz.com/good-news/