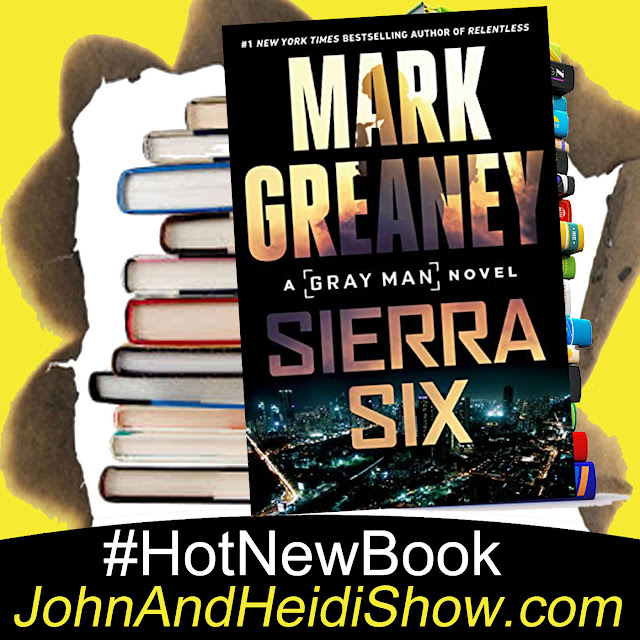 Today we visit with Best Selling Author Mark Greaney. His 11th book in the Gray Man series is out now. Sierra Six is AVAILABLE NOW - https://amzn.to/36rkAFo

He also has a new movie starring Ryan Gossling in the works, based on The Gray Man books.

A new study says most children under the age of 5 get waaay too much screen time. The research, conducted through the University of Calgary, found that although The American Academy of Pediatrics recommends children under 2 avoid any technology except for video chatting, and kids between 2 and 5 should have just 1 to 2 hours of electronics time per day, found that in actuality, just 1 in 4 children under 2, and 1 in 3 children aged 2-5 are meeting those screen time guidelines. The analysis evaluating nearly 90,000 children worldwide found that only 36% of children 2-5 were limited in their screen time to under an hour. Past studies show excessive screen time leads to developmental delays, including language and sociability. It is also associated with childhood obesity and worsening mental health. The researchers say their findings highlight the need for additional public health initiatives aimed at promoting healthy device use.

Scientists say they’ve been able to determine that the asteroid that spelled doom for dinosaurs hit Earth in Spring. A team from Uppsala University in Sweden says it was a spring day 66 million years ago, when an asteroid 12 km wide hit Mexico’s Yucatan Peninsula, leading to an extinction that killed off about three-quarters of Earth’s species, including the dinosaurs. That made way for mammals – eventually including humans – to become dominant. They based their study on bones from 3 paddlefishes that died in North Dakota within about 30 minutes of the impact that happened 3,500 kilometers away.

Blake Lively and Ryan Reynolds are stepping up to help refugees forced to flee their homes in Ukraine as a result of Russia’s invasion. The couple shared social media posts on Saturday pledging to match donations, and encouraging their followers to pitch in and help Ukrainians displaced by the ongoing conflict, which escalated last week. Reynolds wrote on Twitter: “They need protection. When you donate, we’ll match it up to $1,000,000, creating double the support.” He included a link to the United Nations’ refugee donation website. LINK: https://tinyurl.com/bdc3sbhx

Samuel L. Jackson believes there should be an Academy Award for Most Popular Movie. He says he’s tired of criticism of studio blockbusters, particularly superhero films, insisting that all movies are “valid” and bringing audiences into theatres is what the industry is all about. Asked if “Spider-Man: No Way Home” should be given an Oscar, Jackson said: “They should! It did what movies did forever — it got people to a big dark room.”

Angela Bassett was so shocked, she forgot to thank one of her children! She took home the award for Outstanding Actress in a Drama series, for her work in “9-1-1”, during the NAACP Image Awards on Saturday. During her speech, Bassett became tripped up and forgot her son’s name. Afterward, she said: “I went like, brain dead for a second. I had like 6 different people I wanted to thank, really quickly. And I was doing pretty good, and thought really well of myself, and then I forgot my child’s name.”

It’s an established fact that ownership of certain pets contributes to better overall health. Think of the physical benefits of all those miles you’ve covered walking your dog, for example. But now, scientists are saying that pets can also be good for your brain. A new study found that your dog, cat, or other long-term pet companion may delay memory loss and other kinds of cognitive decline. Pet ownership was found to be especially beneficial for working verbal memory, such as memorization, according to the University of Michigan study. And it’s not just cats and dogs that can boost the brain. People in the study also benefited from caring for rabbits, hamsters, birds, fish and reptiles. Owning household pets for 5 years or more was shown to produce the most benefit.

Whether it’s in a new purse, pair of shoes or a bag of beef jerky – at some point, you’ve definitely come across one of those little silica gel packets. Also known as a desiccant, the little packet is put inside many things we buy to absorb and hold water vapour, or moisture. While most of us are quick to toss it out, the next time you see one, you may want to hang on to it. There are a number of other uses for a silica pack. Such as? If your windows tend to fog up, put the package on the sill. If you have an expensive camera or video equipment, throw it in the bag to keep out moisture. And here’s the biggie: If your cell phone gets wet, throw it in a plastic bag with a silica packet or 2. Damp luggage? You guessed it! You can also drop it in a plastic container with your razors to extend their life. And why not preserve your precious memories? Drop the silica in a box of old photos, and let it keep them from growing moldy.

Some cats are allergic to humans.

Raccoons have 4 times more sensory cells in their paws than most mammals. This allows them to “see” with their hands and get images of objects they touch without looking at them.

Being in love makes you a less productive person, according to researchers.

The sound of Darth Vader’s breathing in “Star Wars” was made with a scuba regulator.

The symbol popularly known today as “hashtag” or “pound” is technically called an “octothorpe.” The “octo” means “8”, to refer to its points.

Question: 11% of households have THESE under at least one bed. What are they?

A Scottish woman who rediscovered a bank account she hadn’t touched in over 60 years was surprised to learn her $3.35 balance had ballooned over the decades — into $335. 74-year-old Carol Allison, who grew up in the Philippines, was visiting her grandmother in Scotland when she was 6-years-old, when the older woman helped her open an account at Trustee Savings Bank (now TSB). Grandma hung on to the bank book over the years and it was returned to Allison when her grandmother died in 1969. Allison, who now lives in Scotland, recently came across the bank book while cleaning her house. She took it to the bank, and was pleasantly surprised to find the account still active, and her $3.35 had grown to a hefty $335 over the course of 6 decades. She’s now planning to find out if the other 2 bank books she found at the same time bring any further unexpected windfall.

• “I’m just checking in.” = Where is that thing you promised I’d have by now?

• “I just want to make sure we are on the same page.” = I worry you didn’t understand my simple instructions and will screw this up.

• “Sorry if I somehow missed your email.” = We both know you never emailed me.

• “Perhaps there was a misunderstanding.” = You didn’t freakin’ listen to me.

• “I suppose that’s one way to go about it.” = Stop improvising and just do what I ask you to do.

• “Sorry if my instructions were unclear.” = Are you a moron?

• “I can’t remember if I already asked you to do this.” = I’ve asked you 4 times and you still haven’t done it.

• “Let me know if you have any questions.” = Do not bother me with your stupidity.

• “Thank you for your help.” = I could’ve done this waaay faster myself.

“There is one word that describes people that don’t like me: Irrelevant.” - Anonymous

While planning a recent trip to London from France, Eva Fitzner and Jessica Di Cosmo didn’t realize that “have a double proposal on an ice rink” was part of the itinerary. After 3 years together, Fitzner thought it was time to pop the question. What she didn’t know was that Di Cosmo had the same idea, and also brought along an engagement ring. Once they were at the ice rink, Fitzner got down on one knee and proposed, and immediately after Di Cosmo said “yes,” the tables turned, and Di Cosmo pulled out a ring and proposed to Fitzner. Fitzner said she thought it was “a joke” at first, because it was “the kind of thing you only see in Christmas movies.” She accepted the proposal, to the cheers of nearby skaters. VID LINK: https://tinyurl.com/yckjmstf