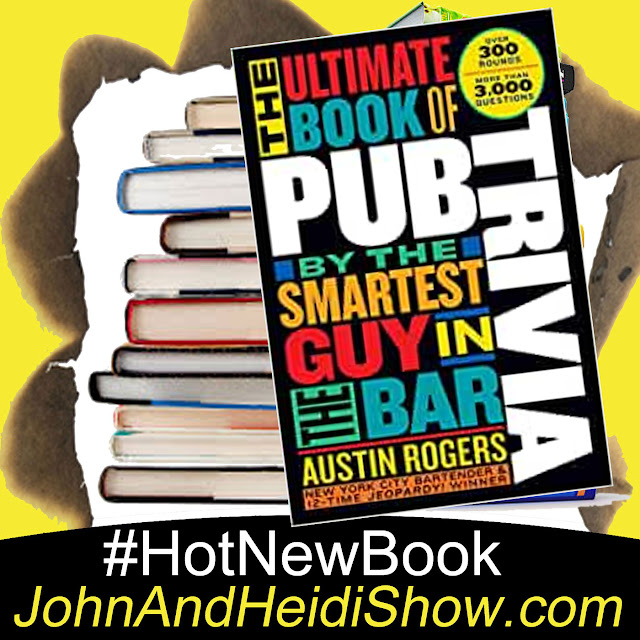 Today we visit with Austin Rogers, who ranks 9th in both highest winnings and consecutive games won on Jeopardy. He has a new book called THE ULTIMATE BOOK OF PUB TRIVIA by the Smartest Guy in the Bar.  On Amazon.com

A study (by Basex, a New York research firm) found office distractions ate up 2.1 hours a day for the average worker. University of California, Irvine researchers found that once interrupted, it takes workers 25 minutes to return to their task, if they return at all. Another finding: people switch activities, such as making a phone call, speaking with someone in their cubicle or working on a document, every three minutes on average.

Chocolate and wine – Is there anything they CAN’T do? Scientists say they have created an anti-microbial lining that can wipe out body odor – by using some sweet-smelling chemicals found in chocolate and wine. Researchers at the University of Tokyo say the invention opens the door to making clothes that don’t have to go in the washing machine after each use. The lining they’ve come up with “zaps” underarm sweat, which is what gives garments a nasty odor. It is a combination of silver and plant compounds (polyphenols) called tannins. They are found in many common foods and drinks including tea, coffee, wine, and chocolate. The coating, called AgTA, is both cost-effective and convenient, according to the team, and would remain on an article of clothing for 10 washes before requiring re-application. They say people working from home could continue wearing the same shirt for weeks without stinking it up.

A Yemen man broke his own Guinness World Record by managing to stack 4 eggs atop one another without toppling. Mohammed Muqbel, who first set the record when he stacked 3 eggs, beat his own record in Istanbul, Turkey, where he managed to stack 4 eggs in a tower. According to him, the hardest part is “finding the center of gravity for each egg due to its unique shape and texture.” https://tinyurl.com/2p862szu

Comedy power couple Nick Offerman and Megan Mullally will host the 2022 Film Independent Spirit Awards. And being that they ARE comic actors, their statement didn’t disappoint. It said: “We hope to get a little rowdy, but it’ll mainly be legitimate cinematic discourse. Although, with the two of us involved, it’s more likely to be intercourse. Either way it’ll be legit.” The 2022 Film Independent Spirit Awards will take place on March 6 in Santa Monica, and will air on IFC and stream on AMC+.

Grab the Tissues! “This Is Us” has officially set a finale date. Showrunner Dan Fogelman and the cast shared the news that the series finale will air on May 24. According to star Vilo Ventimiglia, the last episode is “truly, truly going to deliver”. Sharing brief details about what to expect in the rest of season 6, Fogelman said the show will be spending more time in the Pearson family’s future.

This is obvious so I’ll keep it short. You know that fitness tracker you got for Christmas and stopped wearing last month? Find it, charge it up and start walking. Health data (published in the Medical Journal of Australia) found the more walking you do, the less time you’ll spend in the hospital.

If you’re home is busting at the seams, or you’re one of the millions of homeowners that pays for monthly storage, you don’t need a bigger home — you need to seriously downsize your stuff. And you can start with your kids. No, don’t get rid of them — get rid of their stuff. Specifically their toys. British researchers found that the average 10-year-old owns 238 toys but plays with just 12 daily. And it’s not just British kids: 3.1% of the world’s children live in America, but they own 40% of the toys consumed globally.

The rocket due to hit the moon in March isn’t from SpaceX — it’s from China.

According to a 2014 study, the melting properties of mozzarella make it the best cheese for topping pizza.

Boring, Oregon and Dull, Scotland have been sister cities since 2012. In 2017, they added Bland Shire, Australia to their “League of Extraordinary Communities.”

The smell from Crayola crayons comes from beef fat.

An Australian health insurance company says people who wear Apple watches show a drastic increase in physical activity. The company, AIA, which gives the fitness tracking watches to members of its AIA Vitality program, reports that people over 50 increased their physical activity by an average of 51% while wearing an Apple Watch. The overall increase across all age groups was a still-impressive 35%. AIA offers those who take out the AIA Vitality program the opportunity to meet movement goals, and see payments for their new watch shrink, possibly making the wearable free. Of course, these results do raise the question of whether the extra movement was thanks to the Apple Watch’s presence or simply an indicator of the lengths that some people will go to get something for free. The company observed a movement increase of 24% among the under-30 crowd, 23% for those in their 30s, and 41% for those in their 40s.

There are already a lot of dairy alternatives to choose from but the latest could be a game-changer because of how cheap and plentiful its main ingredient is. How about some potato milk? Potato milk is said to be “deliciously creamy” and great for homemade lattes and cappuccinos. Plus, the humble potato uses a lot less land and resources than other plants that are currently used for milk, which makes it more affordable. DUG, the world’s only commercially available potato milk brand, recently made its debut in the UK, but if you’d like to try making your own, there are dozens of recipes available online.

HACKS FOR A HAPPY COMMUTE:

Do these while en route, and you’ll be happier when you arrive!

⇒ Blast your favorite song: Listen to it over and over again, focusing on a different instrument or vocal each time. Not only will it bring you joy, it will cultivate mindfulness.

⇒ Smell a calming scent: This could mean applying a citrus-scented lotion or playing with a lavender-scented putty – even before you head out the door.

⇒ Take some deep breaths: Stress can cause you to breathe faster. Deep breathing counters the body’s “fight or flight’ response.

⇒ Catch up with a loved one: Call a friend or family member while driving. Catching up with people we love can make us feel supported and nurtured, which improves our mental health.

⇒ Visualize expressing yourself creatively: Think about what you’d write, draw or take a photo of at this moment if you could. Channeling creative energy can leave you feeling focused and boost your mood.

⇒ Think about splurging: Consider grabbing an indulgent latte before you head into the office, or driving the scenic route. Thinking about something that brings you joy gives you something to look forward to, which makes you happy.

⇒ Listen to something you enjoy: It goes without saying that this means you should listen to US... and you are!

“Here’s something to think about: How come you never see a headline like ‘Psychic Wins Lottery’?” - Jay Leno

An Illinois woman held hostage in her home was rescued after her daughter noticed she hadn’t sent her Wordle score and alerted authorities. 80-year-old Denyse Holt told a reporter that a naked man entered her Chicago-area home, dragged her around the house, disconnected phone lines, and eventually barricaded her into a bathroom, where she stayed for about 17 hours. Police went to check after receiving a call from her concerned daughter who hadn’t heard from her. Her daughter became concerned because her mother was not reading her texts and had not sent her usual Wordle updates.