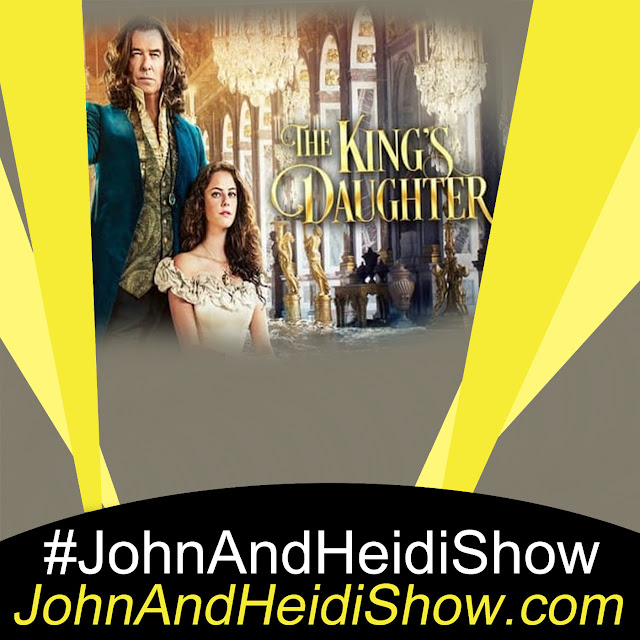 Today we visit with filmmaker Sean McNamara from SOUL SURFER and MIRACLE SEASON and sequels to THE CUTTING EDGE, INTO THE BLUE and BRING IT ON. Prior to that, McNamara produced and executive produced timeless kid classics including KIDS INCORPORATED, THAT’S SO RAVEN and EVEN STEVEN.

He recently wrapped the new film REAGAN starring Dennis Quaid, Penelope Ann Miller, Kevin Dillon, Mena Suvari and Jon Voight. (we will chat a bit about that too)

Sometimes it’s horrifying, but it’s still our job to bring you important information that you need to be aware of. Like this, for example: According to a survey, 1 in 12 people admit to . . . eating their pizza with a knife and fork! A poll of 2,000 pizza-lovers in the US also unboxed these new “pizza information” – just in time for “Pizza Day”, today . . .

• 94% have eaten a pizza within the past month.

• 72% say they love pizza so much, they could eat it for breakfast, lunch and dinner and never get bored of it.

• 47% think pizza is the perfect food for next-day leftovers.

• 33% would shave all the hair from their body, eyebrows included, for unlimited pizza.

And if you can get your mind off THAT visual for a second, the 3 favorite toppings were: pepperoni, sausage and onions, while the most despised toppings were anchovies (of course), pineapple and jalapenos.

A child’s night light may do more than keep away the monsters hiding under their bed. A study from the University of Colorado has found that even slight exposure to dim light can disrupt a youngster’s sleep. Researchers found any type of light exposure before bed can impact the production of the hormone melatonin, which helps indicate to your body when to sleep and when to stay awake. Sensitivity to light may be greater in children than adults because kid’s eyes can take in more light.


Joe Exotic has begged his archenemy Carole Baskin to “leave me alone.” The infamous former zookeeper shot to fame alongside his rival in Netflix’s “Tiger King”, which ended with Exotic being found guilty of a murder-for-hire plot against the Big Cat Rescue founder, and violations of animal welfare law. Speaking in his first interview since being resentenced he said: “What would I say [to Carole]? I am in prison and she can’t leave me alone…Carole, go find another reason to live other than Joe Exotic. Because enough is enough!”

Johnny Depp has armed himself with a major weapon in his epic legal battle against ex-wife Amber Heard. Prominent “Making A Murderer” attorney Kathleen Zellner, who has famously worked to overturn wrongful convictions, has joined Depp’s legal team. That comes after he lost his libel suit in London against a newspaper columnist who labeled him a “wife-beater.” In March, Depp was refused permission to appeal, but is still suing Heard in the US, over a newspaper article in which she described being a victim of domestic abuse.

Some time ago the Wall Street Journal had a story about nagging and how it’s such a huge part of how women interact with their husbands. At least one woman decided to do something about her nagging and shared it on YourTango.com. Her strategy: texting. She sends a text to remind him of certain tasks. Why is a text better? Because a text doesn’t carry a certain vocal “tone” along with “that face.” Men are to blame, too, because they don’t always give a clear answer. Sure, a husband might tune his wife out because he is annoyed; nagging can make him feel like a little boy being scolded by his mother. But many times he doesn’t respond because he doesn’t know the answer yet, or he knows the answer will disappoint her. https://www.wsj.com/articles/SB10001424052970203806504577180811554468728

According to a survey conducted by a Swiss marketing firm, women visit the bathroom more often than men, but don’t spend as long in there. The study found women go five times a day on average and take an average of three and a half minutes, while men go three times a day, but spent an average of five minutes in the bathroom.

Under the right conditions, the human eye can see the light of a candle at a distance of 14 miles.

The eye of a human can distinguish 500 shades of gray.

Your eyes can process 36,000 bits of information every hour.

Some people start to sneeze if they are exposed to sunlight or have a light shined into their eye.

There are 6.3 restaurants per 10,000 residents in Alabama — making it the state with the most fast-food joints in America, per capita.

Put the kettle on. Drinking tea can help relieve the stress caused by the pandemic, according to a new study. According to research from the Tea Advisory Panel, 57% of British tea drinkers said a cup of tea at work helps them connect with colleagues, while 22% added they miss tea breaks in the office when working from home. I’m sure you’re aware that tea is loaded with antioxidants, but this research shows that tea drinking could also aid relaxation and lower stress levels. Co-author of the study Dr. Tim Bond said: “These…findings suggest that tea drinking has wider social ramifications that could impact mental health, which is worthy of future investigation, especially as many of us have suffered huge mental health pressures since the pandemic began.” Previous research has found that both black tea and green tea help aid relaxation, reduce stress levels, and reduce heart health decline. But unlike coffee, tea can act as a pick-me-up without affecting sleep.

The Idaho Potato Commission announced a limited-edition product made from the state’s signature crop: potato perfume. The fragrance, Frites by Idaho, is made from distilled Idaho potatoes and essential oils, and is designed to smell like a fresh plate of French fries. They say it’s “a great gift for anyone who can’t refuse a French fry.” The $1.89 bottles of the fragrance sold out quickly on the IPC website.

MYTHS, BELIEFS AND SUPERSTITIONS ABOUT SNEEZING
• In many East Asian cultures, it’s believed that if you sneeze loudly, it is indicative of someone talking about you behind your back.

• In Poland, sneezing means your mother-in-law is talking about you — but not saying very nice things.

• An Italian superstition suggests that a cat sneezing brings good luck, especially when it comes to money.

• Europeans in the Middle Ages believed that sneezing would bring bad luck. They believed it was a sign that someone was going to die in the coming days because of the amount of breath lost during the sneeze.

• An old superstition claims that sneezing while you’re getting dressed for the day means bad luck will follow you around for the rest of the day.

“My therapist told me the way to achieve true inner peace is to finish what I start. So far I’ve finished two bags of M&Ms and a chocolate cake. I feel better already.” - Dave Barry

In 2017, Meir Kalmanson started an awesome Super Bowl tradition. He invited a group of men he had met on the sidewalks of New York watch the big game with him in the comfort of a VIP area of a Manhattan bar. Video from that first “Super Soul Party” helped turn the event into a nationwide chain of more than 35 annual celebrations for people in homeless shelters. Invitees are treated to great food, a warm place to rest and lively company for the game, PLUS, in recent years, the nationwide volunteers who help bring “Super Soul” parties alive have branched out to include things like haircuts, free clothing and hygiene kits, and even mental health and financial resources for the guests.