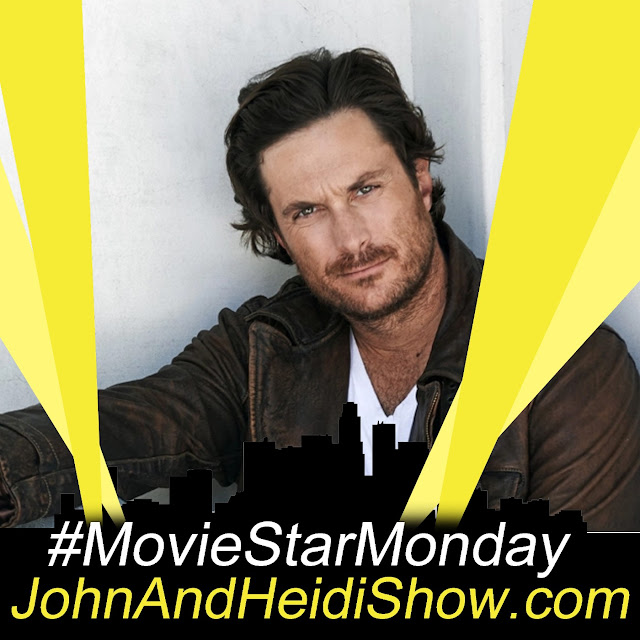 This #MovieStarMonday we visit with Actor and Social Media Extraordinaire Oliver Hudson (Scream Queens, Nashville, Medal of Honor, Splitting Up, Rules of Engagement). He is also the son of Goldie Hawn and Stepdad Kurt Russell, and the brother of Kate Hudson.

Tonight is the season finale of his hit TV show “The Cleaning Lady” at 9/8CT on FOX tonight! https://www.fox.com/the-cleaning-lady/

When whip-smart Cambodian doctor Thony De La Rosa comes to the United States for medical treatment to save her ailing son, she soon discovers her path won't be as straightforward as she had hoped. As the system quickly fails her, pushing her into hiding, she resolves not to allow herself to be beaten down and marginalized, and becomes a cleaning lady for organized crime. Using her cunning and intelligence, Thony forges her own path in the criminal underworld, doing whatever she has to to survive.

National Write Down Your Story Day

The first day of spring is almost here, (March 20th) and for many Americans, that means it’s time to break out the cleaning supplies and tackle those chores you usually put off. But a new survey found that only half of Americans participate in annual spring cleaning. Even more alarming - 37% say they never do a deep clean of their home.

85% of people put off doing the chores they hate

Take a look at the full report for additional insights on Americans’ cleaning habits, how it impacts their relationships, and the role working from home can have on the cleanliness of your home. https://lombardohomes.com/chores-americans-hate/

Not only are they delicious, watermelons offer a wide array of health benefits. A new study by a team at the Illinois Institute of Technology has found that the watermelon is quite unique, as it contains various compounds that benefit multiple bodily areas, including amino acids, antioxidants, minerals, and essential vitamins. The researchers found watermelons not only offer cardiovascular benefits and improved metabolic health, they also can benefit brain health and bodyweight control. They concluded that making watermelons a regular part of one’s diet may help promote greater overall health.

Dave Chappelle is continuing to work with Netflix despite controversy surrounding his comedy special “The Closer”, which was criticized for comments against the transgender community. He’ll host and executive produce 4 upcoming comedy specials, collectively titled “Chappelle’s Home Team”. The specials, according to a Netflix press release, will be stand-alone shows that will each feature a different comic introduced by Chappelle.

It’s just come out that comedian Russell Peters tied the knot in a big way last weekend — inviting almost 300 guests, many of them big-time celebs. Peters and his bride, Ali, had their big day at the Ritz Carlton in Dana Point, CA, with a “who’s who” from the music, comedy and sports worlds. Cedric The Entertainer led the couple through their “I dos” as he conducted the ceremony, and, of course, got a few laughs in the process. R&B great Deborah Cox sang the bride and groom’s first dance song, Chic’s Nile Rodgers made a special appearance and UFC announcer Bruce Buffer introduced Russell and Ali as they entered the reception.

Amanda Kloots has announced that she’s been diagnosed with COVID-19, 2 years after her husband Nick Cordero died after a very public battle with the virus. Kloots, the former Broadway dancer and “Dancing With The Stars” contestant assured her followers that she is “feeling completely normal now and feel very grateful for that.” She added that being vaccinated and boosted against the virus “is very much putting me at ease” and she plans to be back at work on “The Talk” when her quarantine ends.

Do you sleep on your side? Stomach? A skin expert is saying you shouldn’t, if you want to avoid the signs of aging. Dr. Farah Moustafa, a dermatologist and director of Laser and Cosmetics at Tufts Medical Center, says that repeatedly sleeping on your side or your stomach means your face is pushed against a pillow. This pressure on the skin can cause wrinkles to form. Lines caused by sleeping on our side or stomach usually appear as vertical wrinkles, while horizontal expression lines are formed when a person makes facial movements like raising or furrowing their eyebrows. Moustafa says that there “is definitely some benefit from sleeping on [your] back to avoid a lot of the compression forces on the face that create lines over time.” The drawback? Sleeping on your back can increase snoring and sleep apnea…and many people don’t find it a natural position to sleep in.

Here’s a dating app with a different angle: “Fourplay” lets singles go on double dates…and it has a waiting list 9,000 names long. The idea is this: You, as a single, could create a joint profile with a friend – so you wouldn’t have to go on a date to meet a stranger alone. Fourplay matches you and your single friend’s profile with the shared profiles of other pairs of singles, setting up pressure-free double dates. As co-developer Julie Griggs puts it: “If two people meet on a Fourplay date and want to go on a romantic date after that, great! If someone comes away from a Fourplay date with one or two new friends, great!” “If you didn’t vibe at all with the people you went out with … at least you were with a friend so it wasn’t a waste of a night.” Fourplay is currently limited to people in the New York City area, but with new investors coming aboard, it should be available internationally soon.

February 14th is the second biggest card-giving occasion, after Christmas.

On average, teachers receive more Valentine’s Day cards than anyone else.

Question: According to a poll of parents, THIS lasts an average of exactly 17 minutes. What is it?

A vintage copy of Arnold Schwarzenegger’s 1984 movie “The Terminator” on VHS has sold for an unbelievable $32,500. The purchase through ComicConnect.com saw a buyer shell out the incredible amount, even though there was no bidding war, and the buyer’s price was the only offer. ComicConnect and its grading system is trusted by many, so the thinking is this could be one of the most pristine VHS copies of The Terminator anywhere.

THINGS YOU’VE FORGOTTEN YOU USED TO DO:

• Pushing a button 7 times just to get the character you wanted while writing a text. Then missing it and having to start over.

• Accidentally hitting the ‘Internet’ button on your flip-phone and running up charges.

• Changing the TV to channel 3 in order to watch the VCR.

• Having to clean your mouse ball.

• Telling everyone to call you after 9 so you don’t use up all your cellphone minutes.

• Carrying around a cellphone AND an MP3 player.

• Having to get up to switch the videotape for part 2 of “Titanic”.

• Wait for your Netflix movie to arrive by snail-mail.

• Eagerly anticipate arriving home so you could check your laptop and see who was writing on your Facebook wall.

• And remember when you had to use a TV to watch TV?

“I grew up with six brothers. That’s how I learned to dance: waiting for the bathroom.” - Bob Hope

Like many who have felt the mental health impact of the pandemic, New Zealander Brooke Lacey had her own share of issues. In the hope helping others, the 22-year-old was inspired to create a batch of stickers that read: “Please don’t take your life today. The world is so much better with you in it. More than you realize, stay.” She printed 600 of them, putting them up in public places, and one on the back of her car. She promptly forgot about the signs for months, until she came out of a coffee shop one day to see a piece of paper stuck underneath her windshield wiper. Figuring she was on the receiving end of a nasty note about her parking technique, Lacey was gobsmacked to find a note thanking her for saving the writer’s life. It read: “I left my house with a plan and asked for a sign, any sign I was doing the right thing, when I saw your car in the parking lot. Thank you.” Lacey’s tweet about the incident, with the words: I am so glad whoever you are chose to stay today. You never know who needs this reminder”, went viral.