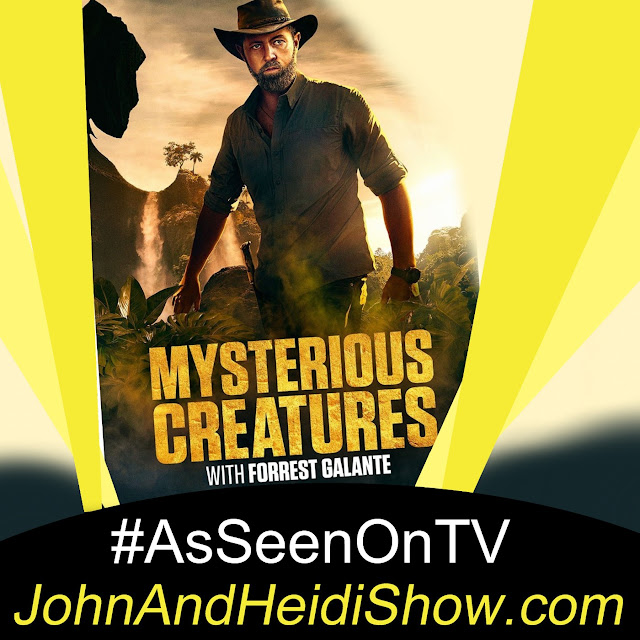 Today we visit with Wildlife Expert Forrest Galante about his new series “Mysterious Creatures with Forrest Galante” which premiered last month on Animal Planet. We will talk about behind the scenes details about rescuing some of earth's most precious and endangered animals as seen in this series- as well as the mission behind this new production company and what we can all do to help animals- and our planet. For more information please visit www.phantasticuspictures.com

So, where do you stand on this? You’ve been working from home pretty much full-time for the past 2 years. Do you ever want to go back to working on-site? Most likely, no, according to the results of a survey released last week by the Pew Research Center in the US. As COVID-19 restrictions continue to be relaxed, 59% of those whose jobs can be done remotely, say they still are working from home much or all of the time, down from 71% in October, and well above the 23% who did frequently before the pandemic. 61% said they are choosing to work from home, and the remainder are working remotely because their workplace is closed. And get this: 60% of workers with jobs that can be done from home say they’d like to work from home all or most of the time when the pandemic is over. Why? Fear of exposure to COVID-19 is a big reason, but for most, they’d like to continue working from home because that’s simply what they prefer…whether it be due to geography, lack of child care or an improved work-life balance.

Most of today’s parents agree that raising kids today is much harder than it was for their folks. A survey, conducted by OnePoll, found that while technology may seem to make parents’ lives easier, 74% of parents think it is more challenging to raise a child now than it was when they were growing up. How so? The top factors that make modern parenting a tougher job are the emergence of social media (66%), more parents working full-time (64%), and, perhaps surprisingly, the rise of technology (58%). 68% admit that they feel like they lean too much on iPads and other devices to keep their kids occupied, while 72% say they value electronics-free time with their kids the most.

“Full House” and “Fuller House” stars Dave Coulier, Candace Cameron Bure, Andrea Barber, and Scott Weinger are set to reunite for the highly anticipated ’90s Con, a 2-day event in Hartford CT, from March 11-13. And as Coulier himself puts it, this reunion will be one for the books since the cast are more than just co-stars—after all these years, they’re practically family. The Full House “family” suffered a tragic loss earlier this year when Bob Saget, known for his role as ‘Danny Tanner’ in the series, passed away on Jan. 9 at the age of 65. And the Full House stars won’t be the only ones bringing the nostalgia, as other ensembles are set to join, including the casts of “Sabrina the Teenage Witch”, “Family Matters”, “Boy Meets World”, “Hocus Pocus” and more.

Derek Hough and Julianne Hough are commemorating the 94th annual Academy Awards with a celebration of dance. The sibling professional dancing duo will recreate some of cinema’s most iconic performances in “Step Into…The Movies with Derek and Julianne Hough” ahead of the ceremony next month. The one-hour television special will put a modern twist on performances from films such as “Singin’ in the Rain,” “Moulin Rouge,” “Beauty and the Beast,” “Chicago,” “Dirty Dancing,” “Saturday Night Fever” and “La La Land.”

Alec Baldwin may have fired the shot that killed “Rust” cinematographer Halyna Hutchins without pulling the gun’s trigger, according to a New Mexico prosecutor. Santa Fe District Attorney Mary Carmack-Altwies said: “You can pull the hammer back without actually pulling the trigger and without actually locking it, so you pull it back partway, it doesn’t lock, and then if you let it go, the firing pin can hit the primer of the bullet.” The prosecutor’s comments collaborate Baldwin’s insistence in a December interview with ABC that the trigger was never pulled.

Let’s face it (so to speak . . .) one of the BIG inconveniences we’ve experienced over the past 2 years is trying to unlock your smartphone via Face ID while wearing a mask. That’s all about to change, though, for iPhone users. Apple’s latest software update, iOS 15.4, aims to ensure Face ID works without requiring you to remove your mask or (gasp!) manually punching in your passcode. The new feature, a technical feat given the fewer facial details it has available to analyze, is still in beta and could launch for iPhone 12 and newer in the coming weeks or months. (Yes, the timing is perhaps a bit ironic considering many jurisdictions are lifting mask mandates these days…) According to one tech writer who had an early version of the software for testing purposes, Face ID worked pretty well with many different masks, but not 100% of the time. Apple is still fine-tuning the feature.

A fashion line based “Bridgerton” is coming to Bloomingdale’s. The period drama — which was, for a time, the highest-viewed show on Netflix — has inspired the department store to launch a series of costumes based on the show. The curation will feature a range of both men and women’s clothing inspired by the show from a diverse range of creators, and will be launched as part of the department store’s latest @Carousel pop-up shop and online. It will be open March 3-May 16, in celebration of the show’s second season, set to premiere on March 25.

Chewing gum while studying, then chewing the same flavored gum while taking a test can help you remember what you studied.

Technically, the “high seas” are waters 12 or more nautical miles beyond a nation’s territory.

Question: One in 5 people always carry THIS item with them. What is it?

Answer: A package of gum

A North Carolina family had an extra-special “Twosday” when a baby was born at 2:22 a.m. on 2/22/22. The Alamance Regional Medical Center in Burlington said in a Facebook post that Judah Grace Spear was born Tuesday — known as “Twosday” by many, due to the Feb. 22 date being stylized as 2/22/22 — at 2:22 a.m. – and, get this, the baby was born in delivery room #2. The hospital said mother Aberli’s pregnancy was already considered extra special by the family because the treatments she underwent for Hodgkin’s lymphoma made conceiving unlikely.

Thanks to the duke and duchess of Sussex, their baby’s name ‘Archie’ skyrocketed to the top of the name charts in 2019. Before the birth of Archie Harrison Mountbatten-Windsor, Archie was best-known for being Jughead’s best friend in the comics. That shows how names, like fashion, pop in and out of popularity over the years. Here are some that have fallen into obscurity over the last century. . . according to the US Social Security database . . .

“Accept who you are. Unless you’re a serial killer.” - Ellen DeGeneres

A new COVID-19 vaccine has achieved 100% efficacy against severe disease and hospitalizations, says its manufacturers Sanofi and GSK. The companies are now set to apply for approval to release the vaccine as both a 2-dose vaccine and booster shot. Advantages of the Sanofi-GSK offering include that because it’s not mRNA-based, it can be produced inexpensively and stored at refrigerator temperatures rather than ultra-cold storage – good news for those in low-income countries where vaccine rollout has been desperately slow. And unlike vaccines based on mRNA technology, this new one is protein-based, a factor which may convince some vaccine-hesitant people to get the shot, since it’s based on older, more widely established technology.