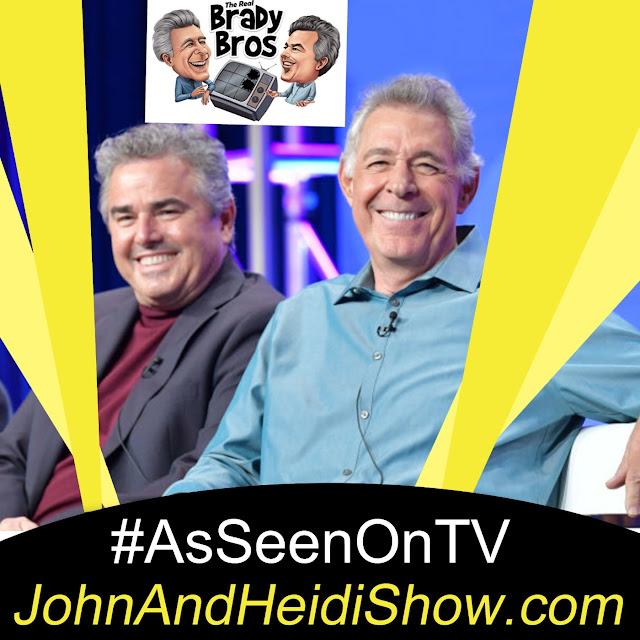 Today we visit with Barry Williams (Greg Brady) and Christopher Knight (Peter Brady) about their latest project “The Real Brady Bros”. They have 7 episodes and more to come. https://link.chtbl.com/therealbradybros

Hosted by two legends of the fabled Brady Bunch franchise, Barry Williams (Greg Brady) and Christopher Knight (Peter Brady). The Real Brady Bros is a new weekly recap podcast where fans of the Bradys get behind the scenes of the fabled series with the guys who lived to tell the tale. Get lost in the Bradyverse with guest stars, cast members, and Brady aficionados to shed light on why the show still resonates today almost 50 years later.

What’s the absolute saddest song of all time? REM’s 1992 hit ‘Everybody Hurts’, according to a survey of 2,000 adults in the UK. Second is Sinead O’Connor’s ‘Nothing Compares 2 U’ and Eric Clapton’s ‘Tears in Heaven’. Also in the top 5 saddest songs of all time: Whitney Houston’s ‘I Will Always Love You’ and ‘Yesterday’ by The Beatles. Some other interesting findings from the poll: 36% choose a sad song when they are feeling nostalgic, 24% play somber music after a breakup, and almost half, surprisingly, believe that a sad song can brighten their day. And just so we don’t wrap this up on a downer, the top 3 happiest songs according to survey respondents are, in order: Queen’s ‘Don’t Stop Me Now’, ‘Dancing Queen’ by ABBA, and ‘Walking on Sunshine’ by Katrina and The Waves.

Incompetent people are often so incompetent that they don’t realize their own incompetence. According to the “Dunning-Kruger effect”, people who are ignorant or unskilled in any area are too inept to notice, so they end up thinking they’re far more competent than they actually are.

There’s a reason Sarah Hyland doesn’t remember filming some episodes of “Modern Family”. She was basically asleep for them. On co-star Julie Bowen’s “Quitters” podcast, Hyland—who played ‘Haley’ on the comedy series’ 11 season run—discussed her second kidney transplant and how her kidney dysplasia caused her to forget filming episodes because she was so tired, and “not able to be awake for eight hours at a time.” Not only was she exhausted, Bowen recalled that Hyland was also in pain.

Paramount has announced it will hold back the Sandra Bullock/Channing Tatum adventure comedy “The Lost City” and the family film “Sonic the Hedgehog 2” from Russia, the latest studio to pull new releases following the unprovoked invasion of Ukraine. This news follows 3 different studios announcing their plans to withhold the release of upcoming films in Russia, including Warner Bros. pausing the release of “The Batman,” Disney yanking the Pixar film “Turning Red” and Sony pulling “Morbius.”

Larry David fans will really have to ‘curb their enthusiasm’ now. The 2-part HBO documentary “The Larry David Story,” which “shines a new light on the infamous cynic who remains a singular voice in comedy today,” was scrapped late on Monday, the day before it was slated to premiere. Why? A tweet from the HBO Documentaries Twitter account says: “David has decided he wants to do it in front of an audience. Stay tuned for more info.” The news came 2 weeks after the network announced the documentary, which was supposed to give fans of the 74-year-old funnyman a “peek behind the proverbial curtain”

Maybe, just possibly, we now know exactly what “Stonehenge” is all about. According to an archaeologist, the imposing group of monuments dominating a plain in southwest England were constructed as an ancient time-keeping system. The central axis of the megaliths, constructed an estimated 5,000 years ago, was — and still is — aligned with the sunrise at midsummer and sunset at midwinter. The stones perfectly frame the rising and setting sun when days are at their longest and shortest. It has long been thought the monument was used for ceremonial purposes rather than an accurate way to track the days, months and seasons. But Timothy Darvill, a professor of archaeology at the UK’s Bournemouth University, conducted a study, and concluded that Stonehenge served as a solar calendar. It’s a pretty complex explanation, but suffice to say this guy knows what he’s talking about. He says Stonehenge is “A place where the timing of ceremonies and festivals was connected to the very fabric of the universe and celestial movements in the heavens.”

Skateboarding legend Tony Hawk suffered a broken femur, apparently while skateboarding, but he’s not done yet. He took to Instagram with the news of his injury, posting a photo of his X-ray and a video of himself on crutches, writing: “Yesterday sucked. I broke my elbow 20 years ago and managed to make a full comeback; this recovery for a broken femur will be much harder because of its severity (and my age). But I’m up for the challenge.” Undoubtedly the most famous skateboarder in history, Hawk also has an HBO documentary about his career coming soon, titled, “Until the Wheels Fall Off.” Ironically, he said, the trailer for that documentary was released on Wednesday.

One of the asteroids seen in “The Empire Strikes Back” is actually a potato.

In England, the Speaker of the House is not allowed to speak.

An average person will forget 80% of what they learned today.

Question: 60% of adults say they can’t make it through the day without some of THIS. What is it?

“Tinder Swindler” Simon Leviev is charging $20,000 for nightclub appearances following the “success” of the Netflix show about him. He’s entertaining offers from as close as Philly and Boston and as far as Germany and Mexico. Apparently, the 5-figure payday includes requests for bottle service at the club, as well a private jet, a 5-star hotel suite, black SUV car service and 2 full-time security guards.

Simon Leviev, the so-called “Tinder Swindler,” is being sued by the diamond-rich family he claimed to be a part of as he allegedly bilked millions from young women he met on the dating app. The lawsuit was filed on behalf of the Leviev family, whose patriarch, Lev Leviev, is a billionaire diamond magnate. Simon Leviev — whose story was recently documented in the Netflix true-crime doc “The Tinder Swindler” — spent nearly a decade traipsing around Europe and posing as an heir to the Leviev diamond fortune, while convincing women to give him money he promised he would pay back, but never did.

YOU KNOW IT’S TIME TO GO HOME WHEN …

• You have absolutely no idea where your shoes are.

• You’ve had to get someone to help you pull your pants up in the ladies room.

• You mistake a police car for a cab and shout obscenities when it doesn’t stop for you.

• You drop your 3 am burger on the floor, pick it up and carry on eating.

• There are less than 3 hours before you’re due to start work.

• You’ve found ‘a deeper side’ to the office nerd.

• The man you’re flirting with used to be your 5th grade teacher.

• You think you’re in bed, but your pillow feels strangely like pizza.

• You challenge the bouncer to an arm wrestling competition.

• You decide to audition for “American Idol” via the security cameras.

“If we’re going to pay this much for crab, it better sing and dance and introduce us to the Little Mermaid.” - Claire Foster (Tina Fey), Date Night

A Dog Presumed Dead In An Avalanche Is Found Alive Days Later
https://www.sunnyskyz.com/good-news