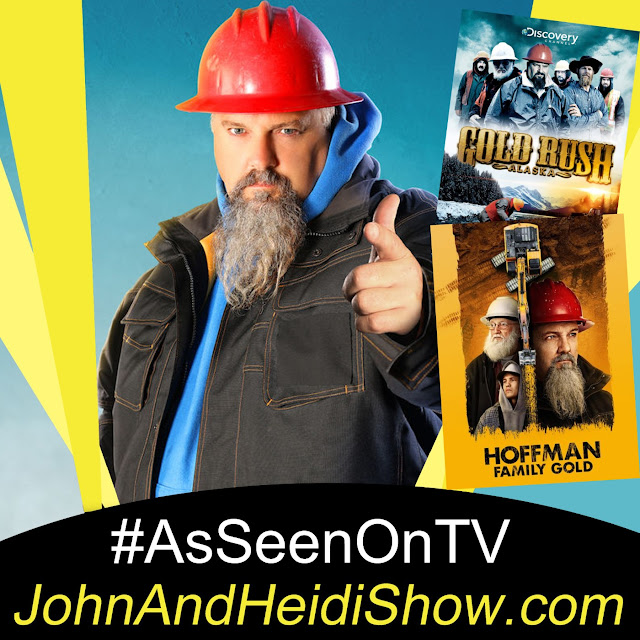 Today we visit with Todd Hoffman, known from the No. 1 show GOLD RUSH on Discovery Channel. We'll talk about his new Discovery series HOFFMAN FAMILY GOLD, which premiered March 25.https://twitter.com/goldrushtodd

National I Am in Control Day

National Take a Walk in the Park Day

According to a recent survey conducted by TopCashback.com, the USA’s most generous cashback site, Americans plan to buy the following this spring:

It may be unlikely that you ever have a chance to travel to outer space, but your name can. NASA is collecting names to be put on a flash drive and sent into space on the Orion spacecraft, scheduled to launch later this year. The initiative is part of the agency’s uncrewed “Artemis I” mission, which is the first mission of the Artemis program to eventually return astronauts to the moon. It’s free to add your name to the flash drive, which NASA says is a way to get people excited about the program and “inspire the next generation.” Since opening the submissions earlier this month, the space agency has already received over one million names.

Host Rebel Wilson opened the U.K.’s BAFTA film awards by making jokes about her recent weight loss, James Bond, the pandemic, and J.K. Rowling’s controversial statements about the transgender community. She took to the stage in a sparkly red gown, explaining that she “might look a bit different” from the last time the audience had seen her, because “since then I’ve done quite a transformation — I hope J.K. Rowling still approves.” Wilson, who shed more than 70 pounds (31kg) after kicking off her self-proclaimed “year of health” in 2020, also joked that her slim-down would help her out in Hollywood, saying “Now I can play the non-funny love interest in an Adam Sandler film.”

Jussie Smollett began his 150-day jail sentence for staging a hate crime against himself in protective custody, separated from other detainees and watched by security cameras and an officer. Judge James Linn sentenced him to 30 months of felony probation — starting with a 5-month term in jail — for lying to police that he had been the target of a racist and homophobic attack. Smollett loudly maintained his innocence and suggested he could be killed in jail.

A British father who nearly threw out a rare Harry Potter first edition has sold it at auction in the UK for the equivalent of US $90,000. He pre-ordered the first edition of JK Rowling’s “Harry Potter and the Philosopher’s Stone” from a bookstore in 1997 for $17.00, but almost returned it because it came without a dust jacket. The man, a collector, said: “Being the first edition, I expected it to have one”, but he decided to hang onto the book on the toss of a coin, which he calls “a moment of destiny.” He later found out the hardback first issues of “Philosopher’s Stone” (called “Sorcerer’s Stone” in the US) did not come with a dust cover.

With the problem of plastic pollution being labeled a catastrophic environmental concern, burger chain A&W Canada is testing something that might help. This month, A&W is piloting the “ButterflyCup”. The ButterflyCup is made entirely from thick, biodegradable cardboard, overcoming the need for a lid or lining. The user simply “creates” a lid by making 2 simple folds. It is constructed with natural paper sourced from forests certified as sustainable. And even if improperly disposed of as litter, the cup biodegrades naturally, a vast improvement over the traditional throwaway cups used by fast food restaurants and coffee shops, which usually aren’t accepted by recyclers because of the plastic coating. The cups are labeled: “No lid. No plastic. No problem.”
https://dailyhive.com/vancouver/aw-compostable-zero-cup

The average English-speaker has about 50,000 words in their mind and finds the right one in 600 milliseconds.

Ancient Romans left graffiti on Egyptian pyramids saying things like: “I didn’t like anything but the sarcophagus,” and “I can’t read the hieroglyphs.”

“Bluetooth” technology is named after a 10th century king, King Harald Bluetooth. He united the tribes of Denmark, just like the wireless technology unites cell phones and computers.

Leonardo Da Vinci’s “Mona Lisa” has her own mailbox at the Louvre because of all the love letters she receives.

Question: Young people are 4 times more likely to do THIS with their phone, compared to older people. What is it?

Answer: Keep it on mute

A Canadian company is attracting attention for its new policy, where it pays candidates for a job interview. Non-profit organization FoodShare Toronto says that since March 1, it has been paying job applicants $75 per interview conducted with the company. Foodshare says it is recognizing the fact that people sometimes have to take time off their current job to go to an interview, there are travel costs, perhaps childcare expenses, and “employers should be paying for that.” CEO Paul Taylor believes “employers have gotten off scott-free for far too long” in expecting job candidates to bear the costs of auditioning for a job. The company also pays candidates, at the rate of pay for the job they’re applying to, if they’re required to do any presentation or assignment as part of the interview process.

BAD THINGS TO HEAR DURING SURGERY:

• “I hate it when they’re missing stuff in here.”

• “Could you stop that thing from beating? It’s throwing off my concentration.”

• “Well folks, this will be an experiment for all of us.”

• “OK, now take a picture from this angle. This is truly a freak of nature.”

• “This patient has already has some kids, am I correct?”

• “Better save that. We’ll need it for the autopsy.”

“My husband and I fell in love at first sight. Maybe I should have taken a second look.” - Halley Reed (Mia Farrow), Crimes and Misdemeanors