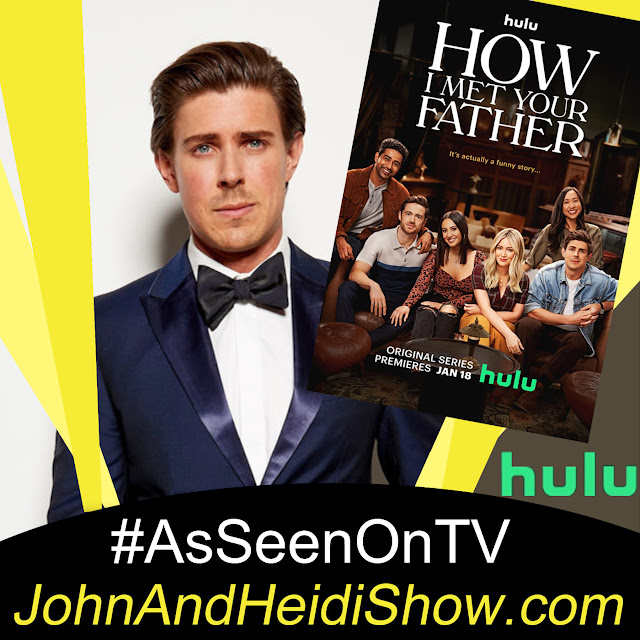 Today we visit with Chris Lowell (GLOW, Private Practice, The Help & Veronica Mars ) about his new show How I Met Your Father... now streaming on HULU.

National Get Over it Day

Well, so much for THAT excuse. If you’re one of those people who claim they haven’t got time to work out, guess what? A new study found that lifting weights for as little as THREE SECONDS a day can have a positive impact on your muscle strength. Researchers in Australia and Japan found that performing a single bicep curl at maximum effort can lead to a 10% increase in muscle strength in one month. The team studied 39 college students who performed one muscle contraction at max effort for 3 seconds a day, for 5 days a week over 4 weeks. The lead researcher said in a release: “Many people think you have to spend a lot of time exercising, but it’s not the case. Short, good quality exercise can still be good for your body, and every muscle contraction counts.”

The 2022 Winter Olympics may end up being called the “Olympics on a budget.” The Beijing Winter Games has an estimated budget of $3.9 billion, according to a study by WalletHub. That may sound like a lot, but it’s just one-fourteenth the money spent on the record-setting 2014 Sochi Games. Estimates show ad revenue for the 2022 games will bring in around $600 million. That’s a 10% drop from the 2018 Winter Games. But the numbers aren’t down in EVERY area . . .at this year’s games, American gold medal winners will not only bask in the pride of their country, they’ll also cash in – to the tune of $37,500. Bringing home silver comes with a bonus of $22,500, while a bronze medal nets a respectable $15,000 bonus.

Trevor Noah, the host of “The Daily Show” on Comedy Central, will be the featured entertainer for the White House Correspondents’ Association dinner on April 30. It’ll be the first time the event, usually held annually, will take place since the start of the pandemic. The dinner is normally attended by prominent journalists, politicians and celebrities, and raises money for scholarships. Although former President Trump skipped the annual dinner during his term, it is expected that President Biden will attend. Noah is also scheduled to host this year’s Grammy awards, on April 3.

Just when you thought Zendaya and Tom Holland couldn’t be any cuter, the couple has proven yet again that they are serious relationship goals. The “Spider-Man: No Way Home” stars are taking their romance to the next level by moving in together. They’re settling down in South West London, 4 miles away from the British actor’s hometown. Their new $4.1 million, 6-bedroom house is also located near the homes of other stars like Angelina Jolie, Mick Jagger, and “Venom” star Tom Hardy.

The internet’s obsession with the 5-letter word game has spawned a number of spin-off games. A puzzle based on 5-letter names and words from the “Lord of the Rings” series also exists, named, of course, “Lordle of the Rings”. A few others . . .

➢ Dordle: Where you must solve for two 5-letter words simultaneously instead of one. Players get 7 guesses instead 6, but each guess of 5 letters counts for both words.

➢ Absurdle: Following the same format as Wordle, Absurdle keeps a record of 2,315 possible 5-letter words. Players must essentially trap the game’s AI into only having one of the 2,315 options left.

➢ Hello Wordl: This one allows players to select how many letters, from 4 to 11, they would like to appear in the solution. You can play the word of the day selected by the game, or play multiple rounds with a randomized word as the solution.

➢ Mathler: Yup, it’s a mathematical version of Wordle. Mathler gives you the solution to the puzzle, then asks you to work backwards to solve using algebra.

Some Wordle fans would like to have a wordle with the New York Times. Since the newspaper’s purchase of the popular brain game last month, many players think it has become “too hard”, according to a viral Twitter thread. One disillusioned Wordler wrote: “Ever since NYTimes bought Wordle, the game got a lil too hard. I ain’t playing no more. this embarrassing score.” The same person added: “I had to use two diff. browsers for extra guess and still barely got the word.” Another wrote: “Good morning to everyone except…the staff at the New York Times, their families, friends, pets and acquaintances.” Another puzzled player posted: “The nyt made wordle too hard i feel stupid now.” One more? “Today’s Wordle should be used to punish war criminals, that was so hard.” Despite all this, the newspaper claims not to have made any changes to make Wordle more difficult. Coincidentally, The New York Times also features arguably the hardest crossword puzzle of any publication.

The world’s shortest international bridge connects a homeowner in Canada to its backyard New York.

A Chinese entrepreneur is a professional anti-procrastinator, whose job is to text and call his clients to make sure they’re getting stuff done.

No high jumper has ever been able to stay off the ground for more than one second.

200 million roses will be sold in the U.S. on Valentine’s Day.

A guy in the UK was working at his computer when he got an alert that someone logged in to his laptop — which had been stolen from his car a couple of days before. The computer security expert quickly logged in to the machine remotely, and the woman using it kept closing the pop-up saying he was there. Eventually the woman went to the bathroom and so they guy went through her Facebook profile, which was still up on the screen, to get her info to turn over to police.

Last year, “Squid Game” was the most-watched Netflix show out there…not to mention one of the most-searched internet queries. And now, a real-life experience has been created in Saudi Arabia. The city of Riyadh is home to the giant Squid Game experience, the first of its kind in the world, where players are able to take part in all 6 trials from the series: Red Light, Green Light; the tug of war; the marbles game; the glass hopping challenge; the honeycomb game; and the final showdown – the “Squid Game” itself. 70 players take part at a time, with each of them receiving invite cards and wearing costumes identical to the TV series. But if you’re worried that, like on the show, participants are killed if they fail to complete the challenges, don’t sweat it – this version of Squid Game is much safer. For example, on the stepping stone game, instead of glass panels that shatter, causing the player to plummet to their death, they have sensors, and the tug of war set is just 3 meters high. Fake deaths or not, the Squid Game is, of course, very popular, and said to be sold out most days. LINK: https://tinyurl.com/2p963f77

• Where Pound Cake Got Its Name – In the 1700s, pound cake was thus named because the recipe contained one pound each of flour, butter, sugar, and eggs.

• Why Toothpaste Messes with Taste Buds – Pretty much everyone knows not to drink orange juice after brushing your teeth, but most people don’t realize that the reason O.J. tastes sour after toothpaste is because the sodium laureth sulfate that makes toothpaste foam also blocks taste buds’ ability to perceive sweetness.

• Why Honey Lasts Forever – Archaeologists have found completely edible pots of honey dating back thousands of years in Egyptian tombs. Why? Its chemical makeup of hydrogen peroxide, acidity levels, and lack of water creates a perfect storm for a long lasting treat!

• Why Spicy Foods Make You Happy – Spicy peppers make you smile! When we eat spicy foods, like jalapeños or other capsaicin-filled peppers, our bodies release endorphins to minimize the burning sensation produced by the chemical.

• Why Chocolate is an Aphrodisiac – You could literally be falling in love with your chocolate. Chocolate contains theobromine, which increases heart rate and creates feelings of arousal.