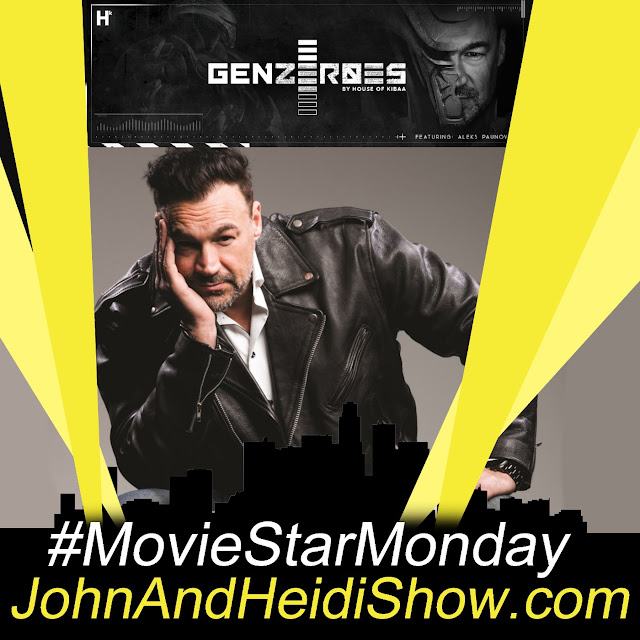 This #MovieStarMonday we visit with Aleks Paunovic who stars in the new Marvel series “Hawkeye,” as well as War for the Planet of the Apes, iZombie, Smallville, Snowpiercer and more!

This actually marks the second NFT project for him (the first being ZERO CONTACT opposite Anthony Hopkins).

NFT is a non-fungible token, a non-interchangeable unit of data stored on a blockchain, a form of digital ledger, that can be sold and traded.


What’s the most common reason for not getting a good night’s sleep (besides Monday morning!)? The biggest causes of a restless sleep include feeling stressed, fretting over finances, and the temperature not being right. A study of 2,000 adults found that 38% suffer from poor sleep because of an uncomfortable mattress, and 36% complain of their partner’s snoring. Sleep can also be disturbed by traffic noise, light coming through the window and caffeinated drinks before bedtime. Mobile phones are also a culprit, with social media blamed by 14%, video games by 12% and reading on devices by 13%. 18% said their sleep patterns have worsened since the start of the pandemic, perhaps due to feeling more worried or anxious. But about that many people also said their quality of sleep has improved, possibly because they invest more time in their bedtime routine, or because they are now able to sleep later, thanks to working from home.

A company claims to have developed the world’s first wearable air conditioning collar. Sure, there are other wearable cooling systems, but they only circulate ambient air. The makers of the Metaura Pro say their product uses a portable cooling solution to produce genuinely cold air that is 18°F (9°C) cooler. It has a small motor linked to a fan at the back, which also dissipates some of that warm air around the neck. The device has a dedicated app and relies on artificial intelligence to regulate air temperature. The Metaura Pro wearable cooling collar is powered by a fast-charging battery that can last up to 8 hours on a charge.


Walt’ and ‘Jesse’ are coming back. After years of fielding questions about an appearance by the “Breaking Bad” characters on the prequel series “Better Call Saul,” AMC has confirmed that Bryan Cranston and Aaron Paul will be back in some capacity in the upcoming final season. Better Call Saul co-creator Peter Gould first made the announcement on a Paley Fest panel on Saturday. The sixth and final season of “Better Call Saul” premieres April 18, but it is being split into 2 parts, with the second half debuting in July. No word on in which half Cranston and Paul will appear.

Vin Diesel just dropped news about the newest “F10” cast member on Instagram. It seems that “Captain Marvel” herself, Brie Larson, will be trading in her superhero outfit for a role in the “Fast & Furious” finale. Diesel posted a selfie of the 2 laughing together, and wrote: “You have no idea how timeless and amazing she will be in our mythology…Welcome to the FAMILY Brie.” Part 1 of the 10th F&F film is scheduled for release on May 19, 2023. LINK: https://www.instagram.com/p/CcJ-Yw0rCqd/

Simon Cowell says he looked “like something out of a horror film” after going “a bit too far” with facial fillers. The “Britain’s Got Talent” star has been open about having cosmetic procedures in the past, but now says there is “zero” filler in his face after finally realizing “enough was enough”. In an interview, he said: “I saw a picture of me from ‘before’ the other day, and didn’t recognize it as me first of all.” Cowell said at one point “There was a phase where everyone was having their faces pumped full of this and the other”, but for him now, “a lot of it comes down to healthy eating and drinking tons of water.”

You might know that ‘G.I. Joe’ was called an “action figure” because Hasbro knew that parents probably wouldn’t buy a doll for their sons. Other products given the “man” treatment . . .

➠ Yogurt: The makers of Powerful Yogurt made the claim that their Greek Yogurt was packed with protein, and would help tone men’s abs. The packages were black with pics of a bull on them.

➠ Diet Soda: Research showed that the word “diet” was seen as feminine, so companies came up with creative ways to pitch low-cal soda to guys. Think Coke Zero (in a black can), Pepsi Max, and Dr Pepper 10 (“with just 10 manly calories”).

➠ Yoga: A company in Boston started a fitness trend called “broga”, which was the same as the yoga that’s been around for thousands of years, plus squat thrusts and push ups (and beer?).

➠ Shower Accessories: To get men to buy bath products, Axe came up with the “Detailer Shower Tool” set, a black plastic ring that looked like a truck tire. One side had a red sponge for sensitive areas, and the other had a piece of black nylon mesh for “extra dirty parts”.

In Portugal, it’s considered rude to write in red ink.

Cabbage was once considered an aphrodisiac.

The word “dude” originated in the 1800s as an insult to men overly concerned with the latest fashion trends.

People who are currently alive represent about 7% of the total number of people who have ever lived.

Question: Health experts say THESE should be washed at least 2-3 times a year, although most of us don’t come close to that. What are they?

71-year-old romance novelist Nancy Crampton Brophy has authored nearly a dozen books, but it’s a blog post she wrote in 2011 titled “How to Murder Your Husband” that’s now turning heads. More than a decade after writing it, she’s on trial for the murder of her husband, Daniel. The novelist wrote the piece for a writer’s workshop. One of the passages reads: “the thing I know about murder … is that every one of us have it in him/her when pushed far enough.” At the beginning of the trial the judge ruled that the blog post can’t be used as evidence since it was written years ago and could cause “unfair prejudice” and “confusion”. The defense says the Brophys were a “loving couple who cared about one another.”

WHAT ARE THE ODDS?

Here is a rundown on the odds of these “odd” things happening to you . . .

⇒ Being killed in a plane crash: 1 in 1 million

“The whole purpose of places like Starbucks is for people with no decision-making ability whatsoever to make six decisions just to buy one cup of coffee. Short, tall, light, dark, caf, decaf, low-fat, non-fat. So people who don’t know what they’re doing, or who on earth they are can, for only $2.95, get not just a cup of coffee but an absolutely defining sense of self.”