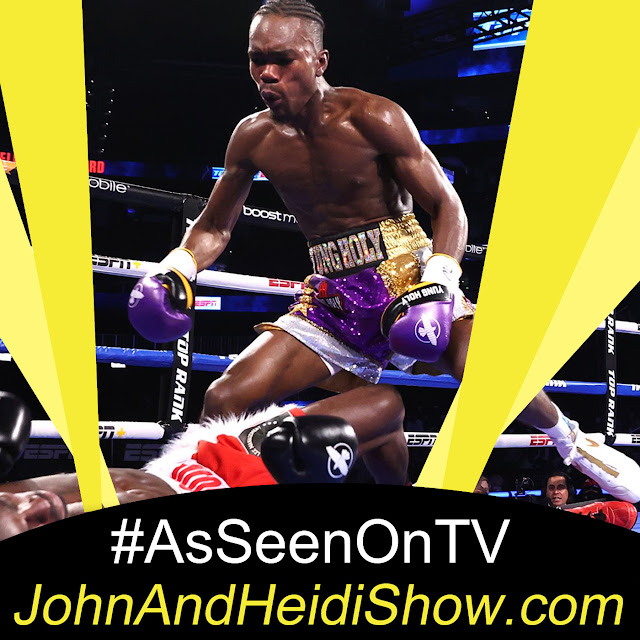 Today we visit with Evan Holyfield (Son of Heavy-Weight Champion Evander Holyfield) about his new show “LEGACY In The Shadow Of Greatness”. A six-part docuseries from 11-time Emmy Award winning filmmaker Jonathan Hock, following the athletic pursuits of the children of sports icons Dwyane Wade, Evander Holyfield, and Randall Cunningham as they attempt to make their own mark on the world.

Scientists in South Korea have come up with new technology that will cut the time it takes to charge electric cars to just 9 seconds, allowing EV owners to ‘fill up’ faster than their gasoline counterparts. And even those plugging-in at home will have their recharging time slashed from 10 hours to 3 minutes. The new device uses the laws of quantum physics to power all of a battery’s cells at once, instead of one at a time — so recharging at worst takes no longer than filling up with gas at the pump.

Mia Goth and Shia LaBeouf are now mom and dad. It appears Goth gave birth to her first child with her on-and-off partner, according to new photos of the 2 stars walking with Goth pushing a baby stroller. News of the birth comes 2 months after the new mom was spotted in Pasadena with a visible baby bump, confirming she was expecting. At the time, neither Goth or LaBeouf’s reps would comment on the pregnancy.

Jason Momoa has set the record straight amid speculation he and Kate Beckinsale are an item. Following the Oscars, the pair found themselves at the center of romance rumors when they were photographed at an after-party, with Beckinsale wearing the “Aquaman” star’s jacket. But now, he’s insisted to a reporter that there’s nothing going on there. He said that he’d given Kate his jacket out of “chivalry”, saying: “The woman was cold… [we’re] absolutely not together. She is very nice, I was being very nice, just being a gentleman.” Then he joked: “Now, I am not giving my coat to anyone.” While on the Oscars red carpet, Momoa shot down reports that he and his estranged wife Lisa Bonet had reunited.

Meghan Markle and Prince Harry’s royal wedding was full of pomp and tradition, but the couple let loose at their private evening reception at Frogmore House — especially when Idris Elba headed to the DJ booth. Elba co-hosted a BBC rap show over the weekend, and spoke about his setlist at the May 2018 nuptials. When asked what tune it was that “got everyone going crazy” at the royal wedding reception, Elba said that guests “went off” when Whitney Houston’s ‘I Want to Dance with Somebody’ played, then added that ‘Still D.R.E.’ by Dr. Dre featuring Snoop Dogg was another big hit. Of that selection, he said: “It was Meghan’s choice”.

An employment expert says in spite of…or perhaps because of…the fact that inflation has hit its highest point in a generation, now is a great time to ask for a raise. Sarah Vermunt, founder of Careergasm, says, right now, job seekers have more power than they used to, because companies are actively looking for new employees AND trying to keep the ones they have. She suggests you do your research ahead of time, and be ready to present a case based on your performance, keep language positive, and pick the right moment to ask. Also, prepare to be patient for your raise to be approved, and consider accepting other perks instead, such as the chance to work from home permanently.

All the attention lately is directed at those who are quitting their jobs, but experts say there may be an even larger group who are still working – sort of. These are the coasters, slackers and cyberloafers. This largely overlooked cohort are the people who are not currently inclined to leave their jobs, don’t hate what they do for a living, but are not motivated or energized. A CNBC report says the pandemic has made coasting widespread. A January study found that only half of employees say they’re engaged at work. 50% said they’re “just showing up,” and 17% describe themselves as “actively disengaged.”

The largest living organism in the world is a fungus. It is in Oregon, covering 2,200 acres, and is still growing.

One of the ingredients needed to make dynamite is peanuts.

People lose over a pound (0.5kg) of weight during sleep through exhaling.

Prior to the 17th century, most carrots were purple.

There is a city called Rome on every continent.

Question: In a survey, 93% of women said THIS is the compliment they would most like to receive. What is it?

Answer: “You have a great smile.”

A British Columbia ski resort celebrated the end of the season with its annual “Downhill Dummy” event, which saw a collection of fake skiers sent careening down the slopes, some on makeshift sleds. Apex Mountain Resort said 13 dummy skiers assembled by employees and local residents took to the slopes during the weekend, resulting in some spectacular crashes. About 500 spectators showed up to watch what the resort claims is the world’s highest-flying ‘dummy downhill’. It involves use of the ski facility’s aerial site, “so these dummies are literally 60 to 70 vertical feet in the air before they crash land,” according to Apex Mountain Resort general manager James Shalman. LINK: https://youtu.be/Zi2aFgWSbWE

☞ Carry around an eye-catching drink or dessert missing a slice or 2: And before you know it, you have to have one!

☞ Offer upgrades without mentioning the price: Want guac with that? Cheese on your burger? Gravy? It’s extra, but they don’t mention that unless you ask…

☞ Do a slight nod when suggesting these upgrades: You might be surprised how well this works. (How did she know I love bacon?)

☞ Give you 2 straws in your drink: It makes you drink faster…and alcohol is where restaurants really make money. (They look funny in your wine bottle, though…)

☞ Be extra nice to your kids: Parents tend to tip more if the server ignores the fact that their little monsters are destroying the floor under the table, and running amuck throughout the place.

☞ Mention dessert up front: Plant the seed while they’re hungry, and they’re more likely to “save room” for dessert. (I don’t have room, but I’m willing to add on!)

☞ Hand you the menu open to the most expensive page: Once you’ve seen those babies, the “salad” page looks pretty boring!

“From the ages of eight to 18, me and my family moved around a lot. Mostly we would just stretch, but occasionally one of us would actually get up to go to the fridge.” - Jarod Kintz

A massive Airbus A380 fueled by cooking oil has just completed its first full trial flight. The plane embarked on a successful 3-hour flight in France, while running on Sustainable Aviation Fuel — predominantly made of used cooking oil and waste fats. SAF is carbon neutral because of the CO2 absorbed while its ingredients are being grown, and is a big part of Airbus’ lofty climate-friendly goals. The aviation company wants to have its aircraft certified to fly on SAF by the end of the decade, and bring the world’s first zero-emission aircraft to market by 2035.