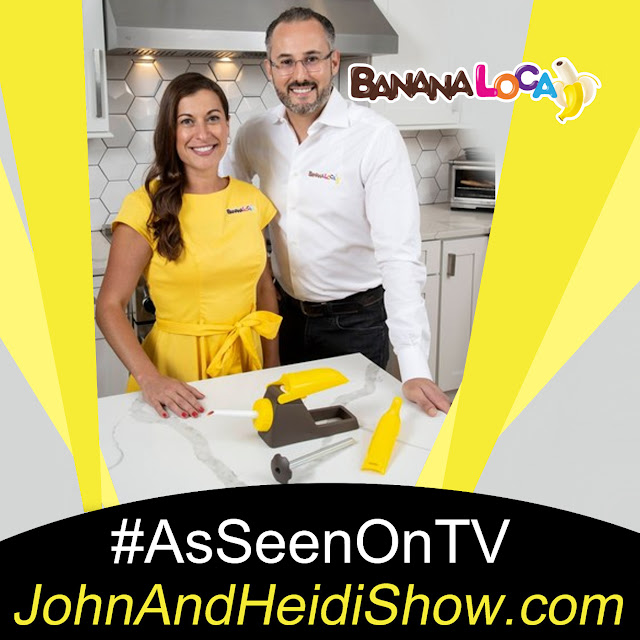 Today is National Banana Day (April 20) and we have two very "appealing" guests! (Haha!) The inventors of the latest kitchen gadget “Banana Loca” that has even the ABC show Shark Tank sharks going bananas! Banana Loca is an innovative must-have product you didn’t know you needed! We will talk with business partners and best friends Renee Heath and Bechara Jaoudeh. They recently secured a deal on ABC’s Shark Tank with two sharks, Mark Cuban and Kevin O'Leary! Dream team! See the product at https://amzn.to/3vlmcJu

Surgeons who listen to AC/DC while operating are more accurate and efficient, a new study has found. Researchers at Germany’s Heidelberg University found that listening to rock music can have a calming effect and even lower blood pressure — and listening to fast-paced music proved to be a major factor in speeding up operations. Doctors who listened to AC/DC’s ‘Highway to Hell’ and ‘T.N.T.’ went from taking 236 seconds to make an incision to 139, and they were also 5% more accurate. The Beatles’ ‘Hey Jude’ and ‘Let It Be’ sped up the time taken to stitch up wounds by 50%, but only when played at low volume.

One in 3 women don’t remember what their natural hair color is. A poll of women between the ages of 42-57 reveals that half have been dying their hair a different color than what they were born with, and the average female Gen Xer hasn’t seen their natural color since at least 2019. Among those in relationships, 32% aren’t sure that their partner knows their real hair color, either.

It’s back to the mega-mansion drawing board for Ben Affleck and Jennifer Lopez, after their deal for a $55 million estate in Bel-Air didn’t go through. Sources say the agreement fell out of escrow. While it’s unclear exactly what triggered the collapse, a buyer is able to pull out during an inspection period, so it’s possible that Bennifer decided there is something they didn’t like about the pad. The newly-engaged couple has been spotted back on the hunt for homes — checking out estates in Beverly Hills and Bel-Air valued at $64 million and $72 million.

A new live-action ‘Casper the Friendly Ghost’ series is in development at Peacock. The show, called “Casper,” is a horror/adventure series that “reimagines” the origin of everyone’s favorite ghost in “a coming-of-age story that explores what it means to be alive,” according to producers. The logline says: “When a new family arrives in the small town of Eternal Falls, Casper finds himself entangled in a mystery uncovering dark secrets that have been buried for over 100 years.”

Mark Wahlberg gained 30 pounds for his latest movie by eating up to 8 meals a day. In “Father Stu,” where he plays a boxer-turned-priest, he piled on the pounds to portray Stuart Long towards the end of his life when he had a rare autoimmune disease. To gain weight for the role, Wahlberg started with a 2-week 7,000-calorie-a-day diet plan. Then, during the last 4 weeks, he upped his intake to 11,000 calories a day. Wahlberg explained he gained weight by eating foods high in protein. Quote: “A dozen eggs, dozen pieces of bacon, two bowls of white rice, a cup of olive oil to start the morning. (Then), more eggs, a porterhouse steak.” And as awesome as that might sound at first, the Oscar nominee says it isn’t something he’d “jump at” doing again. Father Stu, also starring Mel Gibson and Malcolm McDowell, opened this week.

In perhaps the most-shocking product development of all, an “edit” button is coming to Twitter. Testing of the much-demanded feature will be available “in the coming months” to users of the paid subscription service, Twitter Blue, according to a Twitter tweet. The announcement came the same day the company said Elon Musk will be joining its board. On Monday, hours before Twitter announced Musk’s appointment to the board, he invited his followers to vote in a poll on whether the platform should support an edit feature. That prompted Twitter CEO Parag Agrawal to comment: “The consequences of this poll will be important. Please vote carefully.”

Wildtype, a California-based startup is creating sushi-grade salmon by cultivating cells extracted from salmon eggs. The cells grow in steel vessels, spreading over a plant-based mesh to form fibrous tissue. The process is faster than aquaculture and produces no waste since only the edible parts are grown. There’s a long way to go before this futuristic food becomes common, but it’s a hopeful prospect for fish populations and eco-minded sushi lovers alike. Salmon is the world’s largest single fish commodity by value, but overfishing has slashed the salmon population.

Mailing an entire building has been illegal in the U.S. since 1916 when a man mailed a 40,000-ton brick house across Utah to avoid high freight rates.

Humans invented booze before we invented the wheel.

The name “Hotmail” was chosen because it contains, in order, the letters HTML.

Data scientists analyzed over 10,000 words to discover the “happiest” word in the English language. It’s “laughter.”

Earwax is actually a type of sweat.

Question: The average family throws away 70 of THESE perfectly edible items every year. What are they?

San Francisco police were faced with a new challenge after stopping a vehicle with no one inside. In a video posted to Instagram, officers approach the car, operated by driverless taxi company Cruise, because it had been driving without headlights on. A cop remarks that there “ain’t nobody in it” before the car moves forward, appearing to “take off” on police. Cruise later explained that it was pulling ahead to a safer location. The company also explained the headlights issue was a result of human error. LINK: https://tinyurl.com/3jmdmsz7

The Atlanta International Airport is once again the world’s busiest, after being knocked off the #1 spot in passenger volume in 2020 by China’s Guangzhou Baiyun International Airport. The Georgia transportation hub held the top spot for 22 years prior to the pandemic. Here is the top-10 for 2021 . . .

A big thumbs-up to Egyptian swimmer Omar Hegazy, who just broke 2 (!!) Guinness World Records, 7 years after losing his leg in a car accident. The 31-year-old set new marks for “longest distance swam underwater with one breath” (185’ 4”) and “longest distance swam underwater with one breath with fins” (251 ft.). Just as impressive, he admits he first got into swimming because he was very angry at losing his leg. Quote: “I found a way to I let out my anger and frustration, but it was also where I felt really free and capable.” Now, Hegazy is a motivational speaker and has achieved several other athletic milestones, including a 700 km cycling challenge.