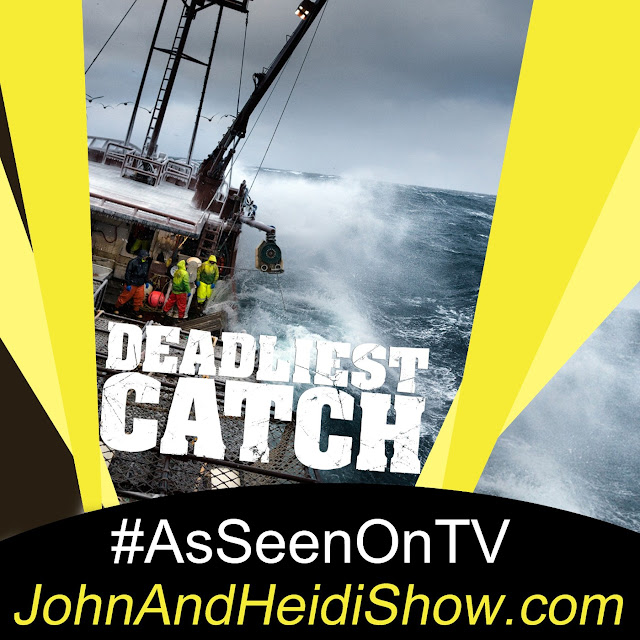 Today we visit with Captain Josh Harris of The Deadliest Catch. Season 18 of DEADLIEST CATCH is on Discovery. This season starts with a bang as the captains are put in an unprecedented situation they haven’t faced in 25 years: the cancellation of the red king crab fishing season in Alaska. DEADLIEST CATCH premiered on Tuesday, April 19 at 8 PM ET/PT on Discovery and will be available to stream the same day on discovery+.

The Season 3 premiere of DEADLIEST CATCH: BLOODLINE will follow at 10PM ET/PT on Discovery and available to stream the same day on discovery+.

What’s the best streaming service? Disney+ is the “genre-leader” according to Fandom’s 2nd annual “State of Streaming” report, which delved into how much consumers feel is a fair price to pay for streamers. Here are the “average” monthly amounts that people said they want to pay for Video on Demand (all figures in US dollars):

61% of those surveyed believe their streaming subscriptions are too expensive. Respondents value the average streamer at $7.46 monthly. 62% said “genre is the key differentiator” between streaming platforms, with Disney+ “the genre-leader to date.”

A Florida man has set the Guinness World Record for the ‘most cinema productions attended for the same film’, after watching “Spider-Man: No Way Home” 292 times IN THEATERS. Ramiro Alanis bought multiple tickets to the movie starting on opening night Dec. 16. To qualify for the record, he couldn’t participate in any other activity during the screening, or even leave for a bathroom break until the credits finished. He also had to provide a ticket stub and written statement from a theater employee proving he had obeyed the rules. While he doesn’t have an official count, Alanis estimates that he spent around $3,400 in movie tickets to set the record.

The teaser trailer for Marvel Studios’ “Thor: Love and Thunder” has officially arrived, and it looks awesome. In the 4th Thor film in the Marvel Cinematic Universe, we’ll see the return of Chris Hemsworth’s hero as he appears to be on a journey of self-discovery. As Guns N’ Roses’ ‘Sweet Child O’ Mine blasts in the background, he says: “I want to choose my own path.” Love and Thunder will see the return of fan favorite Natalie Portman as ‘Jane’, for the first time since “Thor: The Dark World”. Director Taika Waititi has said the movie, which is a direct sequel to “Thor: Ragnarok”, will use elements from the Mighty Thor comic book, in which Jane takes on the powers of the God of Thunder. LINK: https://tinyurl.com/2b55ks64

“Star Wars” actor Ewan McGregor will marry his “Fargo” co-star Mary Elizabeth Winstead tomorrow, according to reports. 51-year-old McGregor is set to tie the knot with Winstead, who is 37, in Los Angeles, after meeting in late 2016 when they played a couple in the FX TV series. A source says: “They are more in love than ever” after welcoming their first child together in June 2020, a son named Laurie. The couple bought a home in the Topanga Canyon area of Los Angeles in 2019.

Liza Minnelli’s longtime friend Michael Feinstein claims the Broadway icon was “sabotaged” at the Oscars by being “forced” to use a wheelchair that sparked concern about her health. During the broadcast, Minnelli took the stage with Lady Gaga to present the Best Picture award. Aside from sitting in a wheelchair, she also notably flubbed some of her teleprompter lines. Friend and collaborator Feinstein said in an interview that she “only agreed to appear if she could sit in a director’s chair, ’cause she’s been having back trouble,” and didn’t want people to worry about her. However, 5 minutes before she was set to appear, a stage manager told her she had to use a wheelchair. Feinstein believes the last-minute change was made because producers “were all shaken up because of everything that had happened earlier” a reference to the Will Smith/Chris Rock slapping incident.

Netflix is planning to add commercials, and not everyone is here for it. After years of resisting ads, Netflix co-CEO Reed Hastings said this week that the company is “open” to adding lower-priced, ad-support plans “over the next year or two.” Hastings explained that “allowing consumers who would like to have a lower price and are advertising-tolerant get what they want makes a lot of sense.” But the news didn’t settle well with everyone, with some people threatening to cancel their subscriptions. Many wondered why Netflix, couldn’t simply offer an ad-free tier at a lower price than its current 3 tiers, and another called the fact that the streamer doesn’t feature ads “the whole reason people pay”.

If your preferred method of devouring Oreo cookies is twisting it into 2 parts, you might have noticed that the filling usually sticks completely to one chocolate wafer or the other. Well, diligent researchers at the Massachusetts Institute of Technology decided to work on the problem. Crystal Owens, a Ph.D. candidate in mechanical engineering used some of the high-tech lab tools there to solve this ongoing Oreo enigma. She and her colleagues invented an “Oreometer” — a 3D-printed device designed for Oreos. The team twisted the sandwich apart with the new Oreo tech and inspected the creme-to-cookie ratio on each side. They also experimented with variables such as dunking the cookie in milk and using different Oreo flavors and the Double Stuf and Mega Stuf varieties. The result? Unfortunately, no trick for opening Oreos to evenly distribute the good stuff was found. The “Oreology” team determined that the crème may stick to one side strictly due to the way they are manufactured, packaged and stored, which is totally out of our control, as Oreo lovers.

Your foot is exactly as long as the distance from your wrist to the crook of your elbow.

Bic pen caps have a hole in the top to allow airflow, should they be accidentally swallowed.

T-shirts were invented in 1904, aimed at bachelors who couldn’t sew or fix buttons.

According to scientists who have taught them sign language, chimpanzees lie a lot.

The blob of toothpaste on a brush is called a “nurdle”.

Question: Stats show the average person does THIS at work 5 times a week. What is it?

Answer: Lie to the boss

An animal park in Germany that had named one its wild boars “Putin” held a ceremony this week to rechristen the hairy hog following Russia’s invasion of Ukraine. The park operator says he named the nearly 200 kg (441 lb) boar after Russian President Vladimir Putin 3 years ago because of its Russian genetic heritage. But lately, whenever he did a roll call of the boar for visitors, a shiver went down his spine when mentioning Putin, given the war unfolding just west. He soon came to the conclusion that no pig deserved such a name, so the park announced a search for a new one. About 2,700 suggestions poured in, and “Eberhofer” – the name of a policeman from a popular Bavarian book series – won the vote.

• Wear pants. Just trust me on that one…

• In order to make a good first impression, be sure to place your beer on a coaster.

• Court-ordered community service is best NOT listed on a résumé.

• Make sure that you spell “Harvard” correctly on your résumé and “diploma”.

• A whoopee cushion can be an effective icebreaker.

• There’s really no reason to mention how well your anger-management treatment is going.

• Wait until after you’re hired to begin stealing office supplies.

• At no time say: “My biggest weakness is that I’m easily annoyed by stupid questions.”

“I have a lot of growing up to do. I realized that the other day inside my fort.”

Firefighters And Volunteers Get Whale Back To Sea After 20-Hour Struggle
https://www.sunnyskyz.com/good-news/