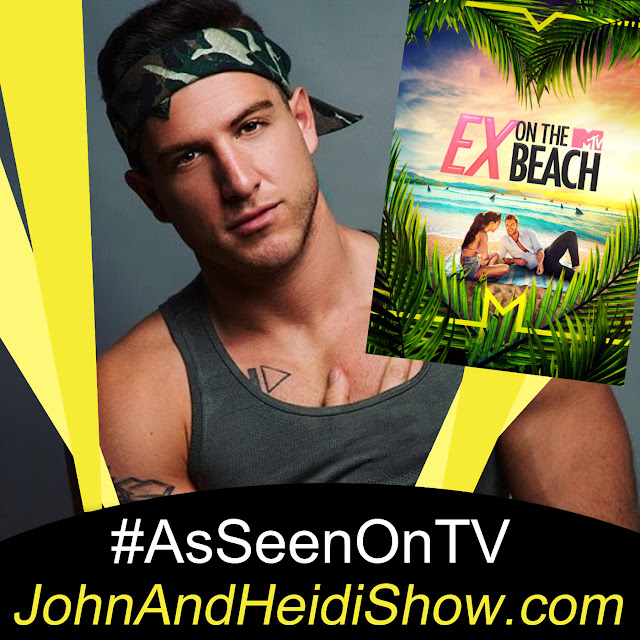 A New, Fun-Filled Season of MTV’s Global Sensation Ex on the Beach is Back! Today we Catch Up with One of This Season’s Exes: Mike Mulderrig (Lindsay Lohan's Beach Club). The Dating Series Returns with 12 Hour-Long Episodes Filmed at MTV’s Global Production Villa on the Gran Canaria Island of Spain.

Exercise. Either you love it, or you need to hear this. A new study of the brain’s signaling networks indicates that it is possible for you to learn to ENJOY a trip to the gym. The study, published in the journal Medicine & Science in Sports & Exercise, says that if you can stick with an exercise routine through a few initially unpleasant weeks, you’ll eventually learn to love working out, thanks to long-term adaptations in how your brain processes mood-altering chemicals. Finnish researchers found in a study of 64 volunteers that not only does your body adapt to a new exercise routine, so too does your brain — although with one caveat: The scientists also admitted “there’s a huge variation between individuals in these responses, and not all people find exercise pleasant or rewarding.”

A leading climate scientist believes that humanity’s days are numbered. Although it may not come within our lifetime, barring some unforeseen event, the global population could begin to see the start of an inevitable decline as soon as the end of this century, argues palaeontologist Henry Gee, in a Scientific American article. He feels that a lack of genetic variation, falling birth rates, pollution, and stress caused by living in overcrowded cities are a recipe for disaster, and humanity is fast approaching a point where even radical change will not be sufficient to halt our species’ rapid decline. He writes: “The signs are already there for those willing to see them. The real question is ‘How fast?’”

After scoring the most Razzie nominations, Netflix’s filmed version of the Princess Diana Broadway musical, “Diana” also won the most Razzie Awards, scooping up 5. This year the Razzies also added an all-Bruce Willis category, with 8 nominees, for worst performance by the actor in a 2021 movie. Willis’ performance in “Cosmic Sin” beat out the other contenders. Other winners/losers were, “Space Jam: A New Legacy” and “House of Gucci”.

Dave Coulier has revealed publicly for the first time he’s an alcoholic, something he says “was hard” to admit. He appeared on Friday’s “Good Morning America” and opened up about his decision to quit alcohol more than 2 years ago. It’s been a difficult year for Coulier, who lost his father, brother and close friend Bob Saget. But maintaining his sobriety has helped him get through tough times. Coulier said he is now having the “best time” of his life, and feels “healthier than I ever have.”

Days after Kim Kardashian revealed her boyfriend Pete Davidson has more than 3 tattoos of her on his body—and a branding of her name—she shared a photo of what she calls his “cutest tat” on her Instagram Story. The tattoo, which seems to be on his clavicle, reads: “My girl is a lawyer.” Kardashian passed her “Baby Bar” last year. The exam is required for all would-be California lawyers who choose to learn through apprenticeship rather than law school. LINK: https://tinyurl.com/5y6npu28

Tesla CEO Elon Musk says he’s giving “serious thought” to creating a new social media platform. On Saturday, he responded to a Twitter user’s question on whether he would consider building a social media platform that would prioritize free speech, and where propaganda was minimal. Musk, a big user of Twitter himself, has been critical of the social media platform, and said the company is undermining democracy by failing to adhere to free speech principles. This happened a day after he put out a poll asking users if they believed Twitter adheres to the principle of free speech, to which over 70% voted “no”. He has now publicly admitted to buying up some twitter stock too!

A UK company has revealed a line of invisibility shields that rely on surprisingly simple technology to actually make users invisible to the naked eye. Startup Invisibility Shield Co. was inspired by Harry Potter’s iconic invisibility cloak to design a “precision-engineered lens array” to deflect light from the subject sitting behind the shield, away from the observer. The lenses are oriented to allow light from the subject to diffuse when it passes through the shield. Light from the subject’s background is refracted towards the observer who cannot see the subject hiding behind the shield. Because the invisibility shield relies solely on optics, it requires no power source to produce its magic. Despite being just over 2 inches (5cm) thick, it weighs just 9 pounds (4kg), making it fairly portable. And though you might think it would be expensive to be invisible, the 12 x 8 inch version is just $63, while the 3 x 2 foot model goes for a reasonable $394. LINK: https://youtu.be/2butkT8vb-E

Beaver eyelids are transparent so they can see through them as they swim underwater.

It would take about 3 years of non-stop pedaling to ride your bike to the moon.

If you lined up every ‘Harry Potter’ book sold, they’d circle the Earth twice. And that was over 10 years ago…

Aerosmith made more money from “Guitar Hero” than from any of their albums.

Meryl Streep accidentally forgot her Oscar in the bathroom during the 1979 Academy Award festivities.

Reading rewires your brain for higher intelligence and empathy.

Question: You’ll consume 9% fewer calories if you do THIS while eating. What is it?

A library in Maine is asking for books that no one else wants. And by that, they mean books that have been banned, “canceled” or fallen out of favor elsewhere. One volunteer at the tiny library on Matinicus Island said: “We are buying banned books in order to publicly push back against the impetus to ban books…saying ‘If you don’t want it in your library, we want it in ours.’” For years, islanders just traded books among themselves, but decided to create a grassroots library in 2016 in a donated storage shed. As the library grew, the island started to become the bookish equivalent of the “Island of Misfit Toys,” in the Christmas classic, “Rudolph the Red-Nosed Reindeer.” Patrons from the community of 100 borrow books using the honor system. And the emphasis on banned books isn’t a big deal on Matinicus, the state’s most remote and isolated community. Some recent acquisitions include “And Tango Makes Three,” the story of 2 male penguins that raised a chick together, and the classics “To Kill a Mockingbird”, “The Handmaid’s Tale” and “The Grapes of Wrath”.

“On the 2nd day the knee was better, and on the 3rd day it disappeared completely.”

“The patient is tearful and crying constantly. She also appears to be depressed.”

“Discharge status: Alive but without permission.”

“Patient had waffles for breakfast and anorexia for lunch.”

“While in the ER, she was examined, X-rated, and sent home.”

“She stated that she had been constipated for most of her life until she got a divorce.”

“Patient has 2 teenage children, but no other abnormalities.”

“What they could do to make it easier is combine the two, real estate and obituaries: Mr. Klein died today leaving a wife, two children, and a spacious three-bedroom apartment with a wood-burning fireplace.” - Harry (Billy Crystal), When Harry Met Sally

Wounded Veteran Is Gifted A Smart Home From The Gary Sinise Foundation
https://www.sunnyskyz.com/good-news/