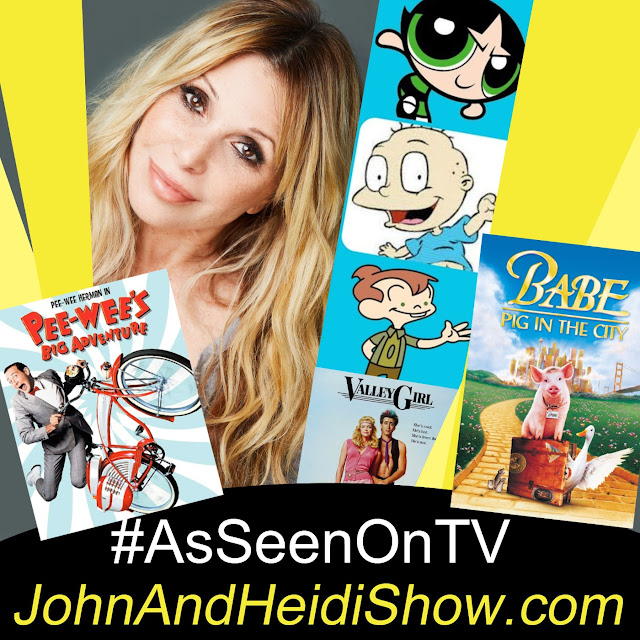 Today we visit with actress, singer & voice actress EG Daily. We will discuss the 30 year anniversary of “Rugrats” and much more!

She recently recorded a cover of “We Got The Beat” for a Go-Go's Tribute Album https://www.youtube.com/watch?v=y_hDj3V0v9Q

E.G. Daily is an iconic veteran actress, singer, songwriter, producer, and director who has starred in over 40 feature films, including “Pee Wee’s Big Adventure” as Dotty and “Valley Girl”. She has appeared in many TV shows, such as “Friends,” playing Phoebe’s ex-song writing partner. She is “the voice of your childhood,” bringing to life Buttercup from the “Powerpuff Girls,” Babe from the film “Babe,” Baby Mumbles in academy award winning “Happy Feet” and Tommy Pickles in the long-running, Emmy-award winning, Nickelodeon “Rugrats” TV series

National Blame Someone Else Day

Researchers say the best way to flirt with someone doesn’t involve impressing them with your car, casually brushing their arm or sending suggestive texts. Whether looking for a fling or a long-term romance, humor is your best bet. Scientists in the US and Norway worked together on the project, polling about 1,000 people to determine if there is one way of flirting that stands out among heterosexual relationships. For both genders, laughing at someone else’s jokes was considered advantageous. But cracking jokes turned out to be the most useful strategy for men. One psychologist involved in the study said: “It is not only effective to be funny, but for women it is very important that you show your potential partner that you think they are funny.”

Remember the 3D graphic of an almost-naked dancing baby that became one of the internet’s earliest viral memes? The original creators of the GIF, popularized on the 1990s show “Ally McBeal, have been working on an update of “Baby Cha-Cha”, as some called him. The clunky GIF has gotten a new 3D-rendered overhaul, and in true 2022 style, the 6 new dancing babies will be released as NFTs this week. The newly rendered “Dancing Baby” appears to be more realistic than the original, with boosted color tones and a sharper image quality. It also looks somewhat plumper. LINK to the original (sound up): https://www.youtube.com/watch?v=-5x5OXfe9KY

Mattea Roach, the 23-year-old Toronto tutor, had her 23-game “Jeopardy!” streak end on Friday — by a single dollar. Her record-breaking run came to a close on a U.S.-themed Final Jeopardy, despite pulling ahead in the early game. The Final Jeopardy clue was: “These two mayors gave their names to a facility built on the site of an old race track owned by Coca-Cola magnate Asa Candler.” Roach lost $3,601 and the game with her answer: “Who are Churchill and Downs?” The correct answer? “Who are Hartsfield and Jackson?” Roach’s cumulative winnings totaled more than $560,000 (US), the fifth largest sum of money during a regular Jeopardy! season in history. She responded to more than 500 clues, an average of about 28 correct responses per game.

Fred Savage has been fired from his role as executive producer and director of ABC’s “The Wonder Years” following an investigation into allegations of inappropriate conduct. Although Disney hasn’t revealed the exact nature of Savage’s misconduct, Deadline reports that it included “verbal outbursts and inappropriate behavior.” The reimagined version of the beloved TV comedy, which premiered last fall, centers around a middle-class Black family living in Montgomery, Alabama during the civil rights movement.

HBO Max has officially ordered a spinoff of its hit animated series “Harley Quinn”. Co-creator Patrick Schumacker announced the news at SXSW in March, but now Warner has given us more details on the show, which will possibly be called “Noonan’s”. The spinoff will center around ‘Kite Man’ (Matt Oberg), who is fresh off a breakup with ‘Poison Ivy’ (Lake Bell) at the end of Season 2. The heartbroken villain will reportedly purchase the bar where many of his kind hang out, Noonan’s, and try to fix it up and run it on his own. The show will serve as a kind of sitcom accompaniment to the main series. Harley Quinn Season 3 is expected to premiere sometime this year, and no date has been announced for the Kite Man spinoff.

Late last year, the U.S. Food and Drug Administration approved a new eye drop medication to treat presbyopia, the age-related condition where eyes have difficulty focusing on close objects. So rather than wearing funky reading glasses or undergoing expensive laser surgery, those of us who find ourselves cranking up the font size on our phone or maxing out the brightness on a computer can now put a few drops of “Vuity” into their eyes, within 15-30 minutes, they should focus like you remember them doing back when your hips and knees didn’t hurt, and your only skin concern was acne. Vuity is approved for once-daily use in each eye. A bottle will cost around $80, requires a prescription and will last for almost a month if used daily.

Three Target stores in the US are offering customers the chance to have a robot paint their fingernails. A company called Clockwork, is test-marketing the service at 2 San Francisco area stores and one in Minnesota. After booking an appointment and paying online, victims…er, rather customers…stick a hand inside the machine (which looks a lot like a printer), which pipes polish onto the nail, leaving no brush lines. Fingernail painting costs $10 and takes about 10 minutes.

In order to overcome gravity and hurl us all into space, Earth would have to spin 800 times faster.

Over the last 150 years, the average height of people in industrialized nations increased by 10 cm (4 inches).

Schoolhouses were traditionally painted red because it was the cheapest available paint.

People in nudist resorts play volleyball more than any other sport.

In Japan, there is a museum of rocks that look like faces.

The word “dice” is now accepted as both the singular and plural.

Question: 35% of adults say THIS is one of the things they look forward to each day. What is it?

You know those super-comfy, round, fluffy beds that people buy for their dogs? Well, inspired by the classic dog bed, a couple of university students designed “Plufl”, the world’s first “dog bed for humans”. And if you’re thinking that it’s just an oversized dog bed, yeah, you’re more-or-less right, but creators Noah Silverman and Yuki Kinoshita say it’s also much more than that. The Plufl was designed “to provide the optimal napping experience” and “maximize comfort and foster a sense of security, delivering relief for those who have ADHD, stress, and anxiety-related issues.” The Plufl was recently launched on Kickstarter, and quickly blew past its fundraising goal of $25,000, netting over $155,000 from hundreds of believers. The $400 Plufl is actually much more comfortable than an actual dog bed, thanks to memory-foam cushioning, and a reinforced edge, which is perfect for a person to rest their head on. And its oval shape encourages sleeping in the fetal position, which is accepted as the most common and comfortable sleeping position. LINK: https://youtu.be/b9oh7SZP84M

2. "I CAN'T BELIEVE YOU NEVER GAVE ME A WEDDING PRESENT."

3. "YOU NEVER WANT TO TALK ABOUT OUR SERIOUS ISSUES."

5. "YOUR CHILDREN DRIVE ME CRAZY!"

In an instant, a DoorDash driver went from delivering a pizza to saving a life. On Feb. 11, Sophia Furtado was making a late-night delivery in Fairhaven MA, but when she approached the house, she saw Caryn Hebert Sullivan lying outside, bleeding from her head. Sullivan has a bad knee, and says she turned while walking and fell, head-first. Furtado had previous medical knowledge from her time training as an Emergency Medical Technician. She yelled for help, waking Sullivan’s husband, who called 911. Furtado stabilized Sullivan’s neck, and didn’t move until medics arrived. Sullivan was hospitalized for 3 weeks, but was on hand to see Furtado receive an award from the local police department, and a $1,000 educational grant from DoorDash. Sullivan says she’s “so thankful” for Furtado, her lifesaving skills, and their new friendship, and said: “She’s my guardian angel.”