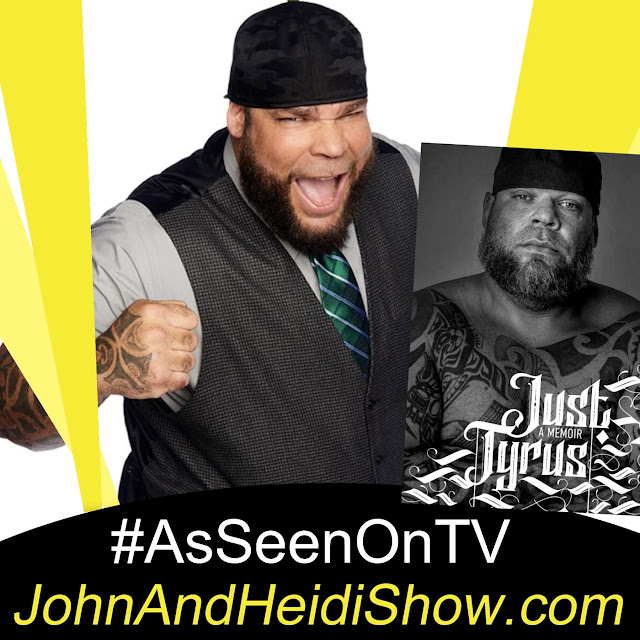 Today we visit with George Murdoch (Tyrus) Pro wrestler and political commentator Tyrus goes deep into his wild but triumphant life story, from his painfully dysfunctional upbringing to bodyguarding for Snoop Dogg, to becoming a wrestling icon and one of the most provocative on-air voices today.

His new book is out now Just Tyrus: A Memoir - https://amzn.to/3MMpjBl

Fad diets are a dime a dozen, but researchers at the University of Southern California say they’ve put one together that will help you live a long and healthy life. Their “Longevity Diet” favors fish and plant-based proteins, and even features a good amount of carbs. The bad news: You need to avoid red and processed meats. The researchers reviewed hundreds of studies on nutrition, diseases, and long life, involving both animals and humans, and combined them with their own research. The Longevity Diet includes lots of whole grains and veggies, a little bit of white meat, low sugar, and fair amounts of nuts. It also requires people to eat their meals within a certain time frame, and allow for periods of fasting. The good news? It includes some dark chocolate.

Saturday Night Live’s Pete Davidson has landed a starring role in a new comedy series. The comedian is co-writing, executive producing, and starring in “Bupkis”, a new half-hour comedy for Peacock which is loosely based on his own life, but heavily fictionalized and exaggerated. SNL creator Lorne Michaels also serves as an executive producer on the series, which is said to take inspiration from “Curb Your Enthusiasm” in its approach. No premiere date has been announced.

After 39 years of marriage, Dan Aykroyd and Donna Dixon are separating. In a joint statement, the couple said they are now on “separate life paths”, but remain “legally married, co-parents, co-workers and business partners.” Aykroyd and Dixon met in 1983 on the set of “Doctor Detroit” and they were married the same year. The couple also starred together in “Twilight Zone: The Movie”, “Spies Like Us”, “The Couch Trip” and “Exit To Eden”. They have 3 adult daughters.

7 THINGS YOU’RE WASTING YOUR MONEY ON (OR AT LEAST, I AM):

☞ Bank fees: Between ATMs and monthly service fees, they can really add up. Find a bank that offers accounts with no monthly fees. Or keep enough money in your account that fees are waived. (I would, but they keep taking it!)

☞ Stuff on sale: Everyone loves a great deal, but spending on something you don’t need just because it’s on sale isn’t wise. Wait 24 hours, and see if that deal still looks good to you.

☞ Subscriptions: A study found more than 70% of us waste more than $50 per month on recurring payments for things we don’t need or want. Carefully check your statement each month and cancel any charges for things you don’t use.

☞ Food waste: Up to 40% of food purchased is never eaten. Take stock of what you have before shopping, and plan your meals (and your shopping list) around the items you already have.

☞ Overpaying for insurance: If you’ve been with the same provider for years, shop around to see if you can find a better price. Sometimes new customers get introductory deals, or you may simply find a policy that offers coverage for less. Also consider bundling home and auto coverage for a discount.

☞ Credit card interest: While credit cards can be useful, they become an expensive burden that drags down your finances when you carry a balance. Focus on paying those cards down, possibly with a lower-interest line of credit.

According to studies, men change their minds 2 to 3 times more often than women.

Every time you shuffle a deck of cards, you get a combination that’s probably never existed.

When pitched, the average Major League baseball rotates 15 times before being hit.

From a complete stop, a human is capable of outrunning a Formula One Race car for about 30 feet.

Only one person in recorded history has been hit by a meteorite.

Cats were once used to deliver mail in Belgium. It didn’t last.

Question: 75% of women say they get suspicious when their partner does THIS. What is it?

We know you’ve been pining away in your room, waiting for the day Chris Pratt will finally get to say such iconic lines as “It’s a-me, Mario!” and “Wahoo!” but you’re going to have to wait a bit longer than expected. The upcoming animated movie adaptation of the Super Mario Bros. video games, featuring the voice of Pratt as ‘Mario’ and Charlie Day as ‘Luigi’, has been delayed. After initially being scheduled to hit theaters this December, it is now set for a spring 2023 release.

"I generally avoid temptation unless I can't resist it." - Mae West

People In Thailand Are Building These Little Shelters For Stray Dogs
https://www.sunnyskyz.com/good-news