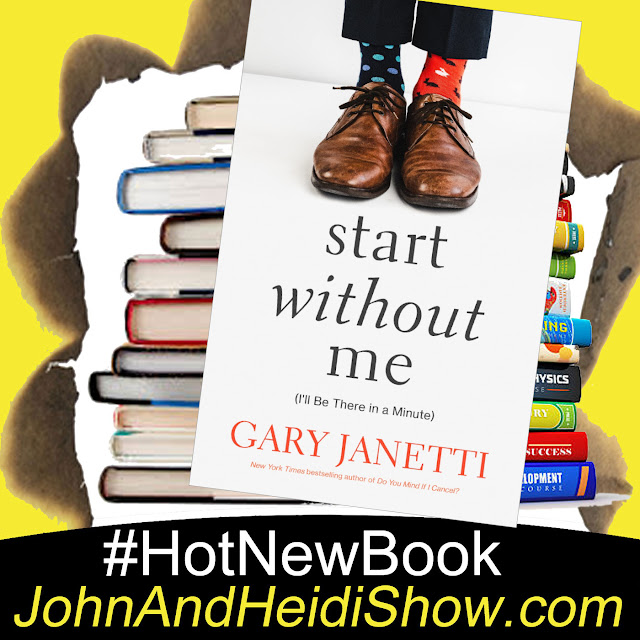 Today we visit with Gary Janetti. He's a writer for the popular TV show FAMILY GUY and the author of a new book “Start Without Me (I'll Be There in a Minute)” AVAILABLE NOW - https://amzn.to/3LG5883

Swinging your arms while running does nothing for your speed, according to a new study. While it is commonly believed that arm swinging propels a runner forward and acts as a counterbalance to the momentum of the legs, researchers from Southern Methodist University found that athletes who ran with their arms closed across their chests ran nearly as fast as when running with their normal arm motion.

What was Twitter co-founder Jack Dorsey’s reaction to the news that Elon Musk is buying his company? He chose to express himself in the form of a Radiohead song. Dorsey seemed to show his support for Musk by tweeting out the song ‘Everything in Its Right Place’. Before Musk’s purchase, Dorsey still owned a little more than 2% of Twitter.

Batwoman’s time in Gotham has come to an end. The CW has canceled the DC Comics drama after 3 seasons. Showrunner Caroline Dries shared the news on Friday, writing: “I am bummed, but full of gratitude. What an honor to make 51 episodes.” The cancellation comes a month after the third season finale aired. It also comes as The CW’s owners, Warner Bros. Discovery and Paramount Global, are exploring a sale of the broadcaster, which has led to speculation that the network would pare back on scripted series.

After a literal decade of waiting, fans will finally get their first look at the “Avatar 2” trailer next week. Disney has announced that the trailer for “Avatar: The Way of Water” will debut exclusively in theaters, before showings of “Doctor Strange in the Multiverse of Madness” which opens next Friday. The trailer will be released online the following week. The first footage from the “Avatar” sequel premiered in 3D at CinemaCon, displaying dazzling advances in underwater cinematography since the first “Avatar” broke box office records in 2009. The OG film is being re-released in theaters Sept. 23, and Avatar: The Way of Water is slated for release on Dec. 16.

A TikTok’er is warning people about a hotel room-service scam that cost a family $6,000. Ali Koca of Toronto told his 1.8 million followers that a family was staying at a hotel, and ordered room service using the dad’s debit card. In the clip, which has racked up almost 2 million views, Koca shares the family’s story in front of an image of a Holiday Inn Express, although the location of the incident hasn’t been made public. The story is that after calling to place a food order and providing the info from dad’s card, the family waited over 90 minutes before finally calling the front desk to ask where their order was. They were told an order from their room was never received. That’s when the man logged into his banking app to find more than $6,000 was missing from his account. It turned out that the room service menu they had ordered from was a fake, that had been slipped under their door by scammers. Koca went on to say” “Once you call and give them your card info, they can login to your account and take out all the money they want.” Online commenters agreed, saying this trick is more common than you’d expect.

Oranges aren’t even in the top-10 list of foods when it comes to vitamin C levels.

There are only about 2 tablespoons of sugar in a bag of cotton candy.

America’s first bank robber (1798, at the Bank of Philadelphia) deposited the money back into the same bank.

Although getting a single tattoo can temporarily weaken your immune system, receiving several tattoos over time can strengthen it.

Question: 21% of us admit we’ve done THIS to end a conversation on the phone. What is it?

A popular YouTuber has had his pilot license revoked after intentionally crashing his plane and filming his parachute escape for views. In Nov., Trevor Jacob, an Olympic snowboarder turned Youtuber, crashed his small propeller airplane into the mountains of California’s Los Padres National Forest. The exact moment his propeller stopped working was caught on camera, as was his jump from the plane and deployment of a life-saving parachute. Three weeks later, he posted a YouTube video titled “I Crashed My Plane”, which quickly went viral, amassing over 2 million views. Following a probe, the FAA revoked his license, pointing out that he never tried to restart the plane, and had attached multiple cameras to the exterior of the plane before takeoff.

SIGNS YOU DRINK TOO MUCH COFFEE:

• You grind your coffee beans in your mouth.

• You lick your coffeepot clean.

• You answer the door before people knock.

• You haven’t blinked since the last lunar eclipse.

• You’ve worn the finish off your coffee table.

• You’re the employee of the month at the local coffee shop, and you don’t even work there.

• Your eyes stay open when you sneeze.

• You chew other people’s fingernails.

• Your T-shirt says, “Decaffeinated coffee is the devil’s blend.”

• You can jump-start your car without cables.

"People say money is not the key to happiness, but I have always figured if you have enough money, you can have a key made." - Joan Rivers

A 90-year-old found her late husband’s wedding ring under an apple tree—35 years after he lost it. Ann Kendrick says Peter, who passed away 22 years ago, lost his band while working in their back garden in Looe, Cornwall in 1987. The mother-of-7 discovered the ring April 23 when she was clearing around the base of an apple tree. She said she was “very excited” to find the ring and added that her husband would have been “as surprised as her.” Ms. Kendrick plans to wear the ring as a necklace in memory of her late husband.