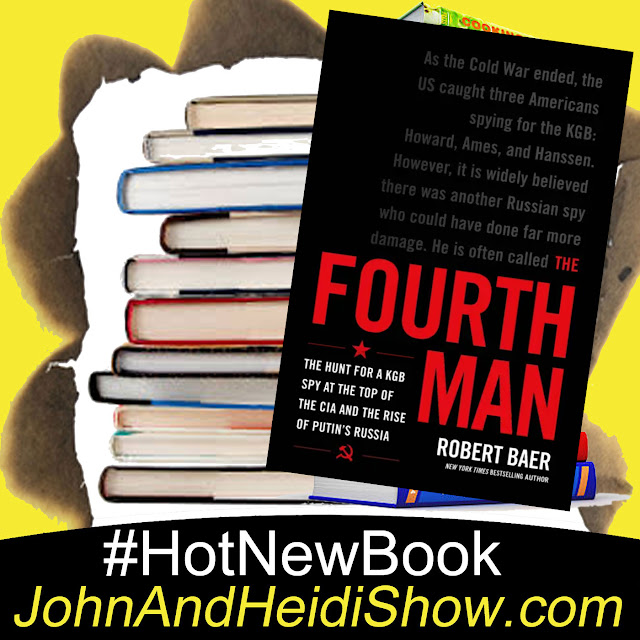 Today we visit with Robert Baer, bestselling author of The Fourth Man: The Hunt for a KGB Spy at the Top of the CIA and the Rise of Putin's Russia. https://amzn.to/3zTOr6d

A recent survey conducted by TopCashback.com, polled a cross-section of 2,537 adults, aged 18 and over.

What are your favorite summer activities? (select all that apply) [top five responses]

Being outside in general (64 percent)


What’s the perfect indoor temperature during the summer?

What’s the perfect outdoor temperature during the summer?

People feel sexiest at age 53! According to the perhaps surprising results of a poll by dating app OurTime, 53 is the age that more than half of people said they felt friskiest in the bedroom, while a whopping 41% said it was the age they felt most comfortable in their skin. Meanwhile, 4 in 10 respondents claimed 53 was a sweet spot because they had let go of worrying about how they came across to a potential partner, while still feeling confident about their looks. And, yes, Jennifer Lopez, who turns 53 on July 24 — appears to be happier than ever, enjoying a red-hot romance with Ben Affleck and flaunting her incredible physique whenever she gets the chance. Other 53-year-old celebs who seem to be similarly thriving include Jennifer Aniston, Renée Zellweger, Mariah Carey, Cate Blanchett and Naomi Watts. Among guys, Hugh Jackman, Paul Rudd, Dave Grohl and Terrence Howard are all 53. Oh, and Will Smith.


Britney Spears’ new hubby wants to be a movie action hero. Sam Asghari has recently sent recorded auditions to Marvel Studios, and the native of Iran says he’s determined to become a “positive role model for young Persian men, rather than the villains they are usually portrayed as”, according to a source. Reportedly, Asghari has also been recently working on his screen fighting skills and has upped his training in mixed martial arts and undertaken stunt classes. He starred in Spears’ ‘Slumber Party’ music video in 2016.

Johnny Depp is warning his fans not to be fooled by the fake social media accounts that have sprung up recently, claiming to be him. He shared a post on Instagram Story, in which he listed his official social media accounts, explaining that any others are bogus. He wrote: “These are the only pages run by me and my team where we share updates and communicate.” He said that his team is working to “combat” the problem of fake accounts. Meanwhile, on his official Instagram account, Depp shared a photo of iconic movie star Hedy Lamarr, along with the caption, “Soon" LINKS: https://tinyurl.com/48k527zy & https://tinyurl.com/4sbufvh2

Ezra Miller will be dropped from future DC films following “The Flash”, according to reports. The actor, who has been arrested multiple times and subject to restraining orders in recent months, will play ‘Barry Allen’ aka ‘The Flash’ in the forthcoming DC movie – which wrapped production in October, and is set for release next June. Deadline says Warner Bros Discovery CEO David Zaslav is facing a “crisis” over how to handle the bad press surrounding Miller. According to a source, “the hope is that the scandal will remain at a low level before the movie is released, and hope for the best to turn out.” The publication also says that even if no further allegations surface against Miller, the studio “won’t likely keep Miller in the Flash role in future DC films”.

➠ You can’t bargain with reservations: If you call the 1-800 number, you’ll be connected to a central office with no ability (or interest in) haggling. Calling the hotel directly will connect you with someone who has the authority to negotiate, believe it or not.

➠ They like it if you don’t use an online booking site: Hotels pay a commission of up to 30% to booking sites. That means if you call someone with the power to negotiate and offer them 20% less instead, there’s a good chance they’ll take it.

➠ Don’t rush housekeeping: If you show up before check-in time and your room isn’t ready, be patient. It takes as long as it takes to clean the rooms properly.

➠ Request clean linens when you check in: The sheets are supposedly washed every day, but blankets and comforters? Maybe once a week.

➠ Ask for an upgrade in private: Don’t ask in front of other customers. In that case, the answer will almost always be “no”.

➠ Avoid the concierge if you want the real deal: They often give suggestions that result in a kickback for them from pricey tourist traps. The front desk clerk may give a more unbiased opinion.

➠ Take the soap: They have the hotel logo on them for a reason — and they’re cheap. They want you to take them.

➠ They might be lying to you: If you tell them the elevator is broken and they say “someone’s coming soon”, chances are that’s not exactly true.

A “gut feeling” is a chemical signal that your stomach creates to warn the brain of danger.

The first day of summer (in the Northern Hemisphere) is always between June 20th and June 22nd. It varies due to the Earth’s rotation not exactly reflecting our calendar year.

China has only one time zone.

There are more French restaurants in New York City than in Paris.

The original recipe for chocolate contained chili powder instead of sugar.

Question: Believe it or not, over half of us say we never do THIS during the summer. What is it?

Who want to be billionaire? Not as many people as you might think. According to a new survey by researchers at the University of Bath (in England), it does not take piles upon piles of money to “live your best life” — and that’s something that they believe is good for the planet. They surveyed nearly 8,000 people in 33 countries, asking what people think they need to achieve their “absolutely ideal life.” Surprisingly, in 86% of the countries, the majority said they could live their best life with less than $10 million. In some countries, respondents said they could achieve this with less than $1 million. The team says there is a long-standing economic principle which states that “unlimited wants” are the motivating force for everyone, which keeps us running on a “consumerist treadmill”, thus depleting the world’s resources. The researchers say that their discovery that “most people’s ideal lives are actually quite moderate could make it socially easier” for us to live greener lifestyles and “to support stronger policies to help safeguard the planet.”

15 Tips to Learn How to Learn

The Memory Palace Technique
Become a Note Taker
Ditch the Digital
The Interleaving Effect
Give Your Brain a Break
Test Yourself
Take a Nap
Own Your Environment
Explain Like I’m Five
Learn by Heart
Find Your Optimum Noise
Set Up Learning Stations
Lights, Color, Clutter!
Learn Stacking
Be The Guru

"As you get older, three things happen. The first is your memory goes, and I can't remember the other two." - Sir Norman Wisdom