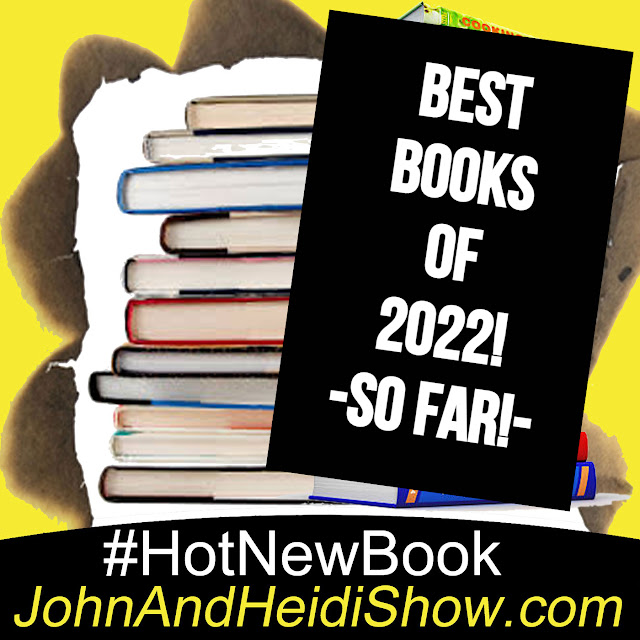 2. What My Bones Know: A Memoir of Healing from Complex Trauma - Foo, Stephanie
https://amzn.to/3QNdU7k


5. River of the Gods: Genius, Courage, and Betrayal in the Search for the Source of the Nile - Millard, Candice
https://amzn.to/3xOkRw0


13. The First Kennedys: The Humble Roots of an American Dynasty - Thompson, Neal
https://amzn.to/3Os5TDk


Although it’s tempting during those hot, humid summer nights to shut yourself in a dark room with your fan running, you might want to rethink that strategy. Why? According to Sleep Advisor, aside from adding to your electricity bill, it can also have a negative impact on your sleep. The sleep publication says fans blow dry air around the room, which could lead to a number of concerns, such as dry skin and sinus issues. Quote: “If the dryness is particularly extreme, it can result in your body producing excess mucous to compensate. Then, you’re more susceptible to blockage, stuffiness, and sinus headaches.” Another possible complication is waking up with sore muscles, because concentrated cool air can make your body tense up and cramp – although that admittedly is an extreme case. Sleep Advisor suggests not spending the night with the fan cranked up if it’s triggering any allergy or asthma symptoms or if you’re experiencing dry skin, eyes, mouth or sinuses. You could also consider getting a fan with an automatic shut-off timer.

The world’s largest recorded freshwater fish has been caught in the Mekong River in Cambodia. The stingray, captured on June 13, measured almost 4 meters (13 feet) long and weighed slightly under 300 kg (660 pounds). The previous record for a freshwater fish was a 293 kg (646 pound) Mekong giant catfish, discovered in Thailand in 2005.


Mel B has been announced as a judge for Season 2 of Paramount+’s drag queen singing competition “Queen of the Universe”. She joins returning judges Michelle Visage, Vanessa Williams and Trixie Mattel, along with Graham Norton, who will return as host. Scary Spice takes over for Leona Lewis, who served as judge on the first season. Queen of the Universe follows the world’s most talented drag queens as they battle it out for global domination, and countries go head to head spotlighting their top talent, in hopes of being crowned the “Queen of the Universe.”

The second “Yellowstone” prequel has a new name and will change directions slightly. The show once known as “1932” is now called “1923”. Harrison Ford and Helen Mirren are still attached. The name change, as you may have guessed, is because the show will now be set in 1923 Montana, not 1932. This clears up a plot hole: The new Taylor Sheridan series was to focus on the Great Depression and prohibition, but Montana became the first state to repeal prohibition in 1926. Paramount+ says that the Great Depression will still be in play, as it began in Montana much earlier than other states. 1923 will also be set 5 years after the end of World War I, another event which will influence the storytelling. 1923 will debut in December.


For best results, refrigerate after opening.” That’s what’s printed on every bottle of Heinz ketchup. But according to the company’s own stats, a full 1 in 5 consumers prefer their ketchup at room temperature. Meanwhile, more than half say ketchup MUST be eaten cold. So, the people at Heinz Canada came up with an alternative solution: Heinz Cold Ketchup. The new limited-edition glass Heinz bottle features an icy blue label that changes color based on temperature. The company says it was designed as a “nod to fans who love it cold, and a challenge to room temperature fans to chill out and try it.” While it’s the same classic condiment inside, Heinz says it hopes the temperature indicator will ease tensions among those who aren’t sure if the ketchup they are about to eat is set for ‘peak performance’.

Mustard-maker French’s inspired an internet meltdown Monday over its new ketchup popsicle. It calls the “Frenchsicle” a “refreshingly savoury & sweet ketchup popsicle, made from 100% Canadian tomatoes,” which will be available for a limited time this summer in Canada. Reactions ranged from “yuk” emojis to multiple references to the 1995 Chris Farley/David Spade movie “Tommy Boy,” in which Spade tells Farley, “You could sell a ketchup popsicle to a woman in white gloves.” The tomato-based ‘sicles are made in collaboration with Happy Pops, which specializes in all-natural ice pops. LINK: https://tinyurl.com/yckcxuud

Humans cannot walk in a straight line without a visual point. When blindfolded, we will gradually walk in a circle.

Dogs can be allergic to humans

Humans are scientifically proven to be happier in the summer.

Cows give more milk when they listen to music.

Question: 17% of men say they have to get permission from their partner to do THIS. What is it?

Brits are being warned by authorities about sunbathing nude in their own backyards…or as they call them, “gardens”. Apparently, police are advising sunbathers to be careful if they plan to sunbathe naked in their garden but are ‘overlooked by neighbors’, and remind people that there are still rules that must be followed: According to the Crown Prosecution Service, “You will have to decide whether your desire to be naked in your garden is more important to you than being on friendly terms with those around you. As long as it’s clear you mean no harm or distress in displaying your naked body and letting your bits hang freely then you should be fine and avoid running the risk of breaking any laws.” While authorities noted that in an ‘ideal world’ hopefully police wouldn’t be called by a neighbor if they spotted you ‘gardening in the buff,’ they added that ‘in the real world’ it’s best to take some ‘simple precautions’. Those could include sunbathing behind a screen, or finding a corner of your garden which is “less overlooked”.

4. Others treat you the way you treat yourself

6. Happiness is a choice and requires hard work

7. A lifetime isn’t as long as you think

8. The biggest risk is not taking any risk

9. Things don’t matter so much

"Before you marry a person, you should first make them use a computer with slow Internet service to see who they really are." - Will Ferrell