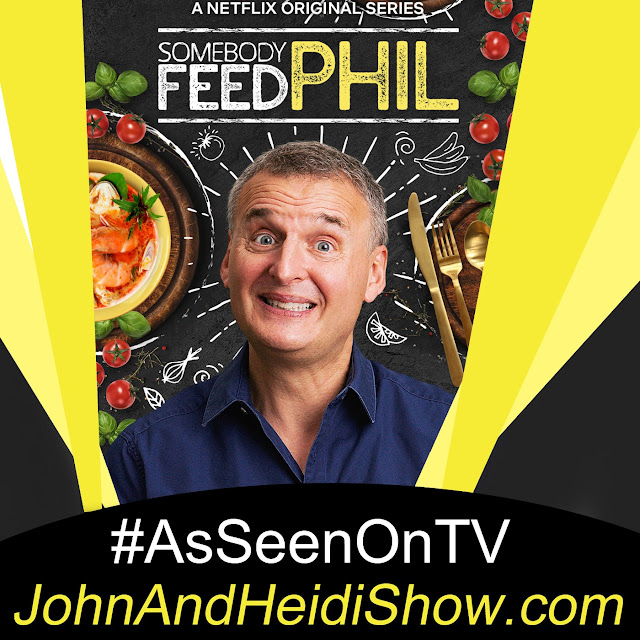 Today we visit with Phil Rosenthal (creator of Everybody Loves Raymond) about his hit show on Netflix. Season FIVE is out now Somebody Feed Phil

If you’re a new parent, you’ll be familiar with this routine: Those with children under 2 years of age Google baby questions about 6 times per day, on average, according to a poll. That amounts to about 2,000 questions Googled in a year. The survey, conducted by OnePoll for CeraVe, found that questions these new parents are Googling most-often tend to be about which baby products are recommended by experts, and how to take care of skin conditions like diaper rash, both at 43%. Other most-Googled topics include:

38% of parents surveyed admitted they were surprised by how little they actually knew about caring for a newborn in that first year. But Dr. Google isn’t the only expert that new parents consult with. New Moms and Dads also called their own parents an average of 56 times in the first year, and reached out to medical experts 67 times. They also say they spent an average of 1,600 hours holding their baby, and struggled through 77 sleepless nights.

It’s Queen Elizabeth II’s Platinum Jubilee on Thursday, and to mark the special occasion, UK Prime Minister Boris Johnson is set to announce the return of imperial measurements. A government source says Johnson will confirm that retailers will soon be permitted to sell items in pounds and ounces rather than the grams and kilograms they currently use. For almost 60 years, the UK has used the metric system, and while it’s always been legal for items to be priced using pounds and ounces, they must also be priced in grams and kilograms. It’s thought that retailers will be able to choose which of the two, pricing methods, or both, they wish to use in the future.

“So You Think You Can Dance” recently introduced a new panel of judges, but one of them has already been fired. Matthew Morrison has exited the show shortly after its Season 17 premiere. In a statement, Morrison said that the decision to leave was left out of his hands after he failed to “follow competition protocols.” The Glee alum said that he is no longer able to “judge the competition fairly,” and “cannot apologize enough to all involved.” Morrison appeared alongside Jojo Siwa and Stephen “tWitch” Boss during the Season 17 premiere, and will appear in a total of 4 episodes that were pre-taped.

Fresh off his highly-publicized defamation trial with Amber Heard, Johnny Depp made a surprise appearance Sunday at a Jeff Beck concert in England. Depp joined Beck on stage to perform their 2020 collab ‘Isolation’, a remake of John Lennon’s 1970 song. The pair also performed a cover of Marvin Gaye’s ‘What’s Going On’ and Jimi Hendrix’s ‘Little Wing’. In addition to his film career, Depp is a notable guitarist and a member of the band Hollywood Vampires, alongside Alice Cooper and Joe Perry. This Depp sighting came just 2 days after lawyers delivered closing arguments in his $50 million defamation case against his ex-wife Amber Heard. LINK: https://youtu.be/E1zP306fG5k

Ice cream season has definitely begun, and we saw the stat last week that says you’ll enjoy the stuff about 40 times this summer. And while we all love the classics – who can resist a tower of soft serve, or a heaping hot fudge sundae – a reporter in New York headed out with the mission to find the most intriguing, kooky confections in the city. Here are some highlights . . .

• Guacamole: Some spices are added to the avocado to evoke guacamole.

Given the choice, mice prefer sweets and carbs over cheese.

The Chinese words for “crisis” and “opportunity” are the same.

Due to gravitational effects, you weigh slightly less when the moon is directly overhead.

Lighting hasn’t brought down a plane since 1963, due to engineering that lets the electric charge of a lightning bolt run through the plane and out.

Question: 60% of Uber drivers say THIS is one of the worst things you can do when they give you a ride.

The man who holds the Guinness Record for most squares tattooed on his body — 848 – has added a few more, plus a special Guinness tattoo. Matt Gone was awarded the title in 2014. Among the places he’s had ink done are his tongue, his eyeballs (which are now a striking shade of magenta with gold), and the most painful spot, according to him — the nose. In a new video from Guinness, he claims to have added 20-30 more squares to his body in the form of various flags. LINK: https://youtu.be/2rHvK5hdvak

A California man put his love of spicy food to the limit when he broke a Guinness World Record by downing 3 Carolina Reaper chili peppers in 8.72 seconds. Gregory Foster was attempting the record at the in San Diego, and ended up eating 6 of the super-hot peppers when his first attempt was disqualified. The Carolina Reaper pepper has an average of 1.64 million Scoville Heat Units, compared to 2,500-8,000 for the average jalapeno.

A British man spent 36 hours rocking back and forth on a swing set to break a Guinness World Record. 51-year-old Richard Scott of Kinross started swinging at 6:10 a.m. on a Saturday at Loch Leven’s Larder cricket pitch and finished Sunday evening. His 36-hour swinging marathon broke the record of 34 hours, which was set in October 2020.

• Can I watch Charlie Brown if I’m allergic to peanuts?

• Am I allergic to romantic comedies because I get watery eyes?

• What do I do if I’m allergic to allergy medications?

• If you’re allergic to mussels, is it safe to go to the gym?

• Can I borrow your sleeve?

"I'm not offended by blonde jokes because I know I'm not dumb. And I also know that I'm not blonde." - Dolly Parton

A blind girl has amazed doctors after she regained her sight and “cured herself” of what’s usually a life-long brain condition. Evie-Mae Geurts was registered blind at just a few months old, and when her head started to swell a few months later, doctors discovered she had hydrocephalus, the build up of fluid in the brain. The pressure inside her head was 32 times normal level, and doctors warned while they could help relieve the pain and build up, the damage to her brain was done. Her sight was “gone forever”, and she’d likely never learn to walk and talk. Against all the odds, not only did her sight return when she was a toddler; Evie-Mae also learned to walk and talk. Wondrously, her hydrocephalus disappeared last year. Usually, hydrocephalus is a condition which can’t be cured and forever requires shunts to drain fluid from the area. Evie-Mae is now thriving as a 7-year-old. She lives without shunts, is top of the class, and can see perfectly without glasses.