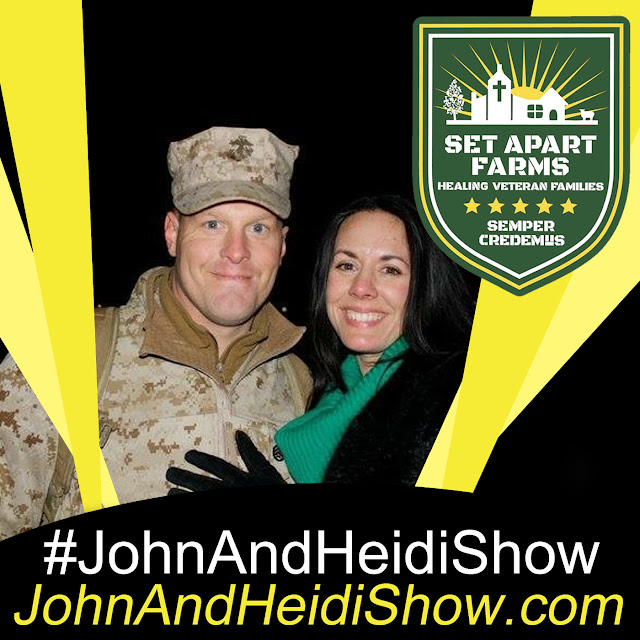 Today we visit with Staff Sargent James Hollan Set Apart Farms. The have an amazing event this weekend, but we're going to focus more time talking about their amazing program! SetApartFarms.org


A body language expert says that how a woman holds her purse (or handbag) can reveal a lot about your personality. Patti Wood claims that wearing a purse in the crook of your arm shows that you are high-maintenance and worry a lot about social status. However, wearing a cross-body with the purse sitting in front of you means you prioritize protection and accessibility. Wearing it behind you demonstrates that you likely have a cool, calm, and collected personality. As you might imagine, the type of bag you use also says a lot about you. Those who wear backpacks are independent, and tend to want to take care of themselves and everyone around them. And those who carry their bags in their hands tend to be assertive, well-organized, and efficient.

Feeling good is becoming increasingly rare these days, according to a new survey. In a poll of 2,000 people in the UK, adults said they truly feel good — both mentally and physically — less than half of the time (47%), on average. One in 4 respondents deal with anxiety at least once per week, and 40% percent battle muscle aches on most days. Sadly, just under 6 in 10 (57%) say they rarely feel “on top of their game” physically. Another 61% have simply accepted that aches and pains are part of their daily life.


Austin Butler is receiving a lot of praise for his role as ‘Elvis Presley’ in the upcoming Baz Luhrmann-directed biopic, out in June. Not only are critics praising his performance, the 30-year-old has gotten rave reviews from Elvis’ former wife, Priscilla Presley and daughter, Lisa Marie. In a new interview, Butler said that the positive response from Lisa Marie, “brought me to tears.” Earlier this month, Lisa Marie took to Instagram to share her thoughts about the film, calling it “nothing short of spectacular” and “absolutely exquisite.” In the interview, Butler said: “I want everybody to love the film, obviously, but the pressure I have really felt is doing justice to Elvis.”

Alexis Bledel, who has played ‘Emily’ on “The Handmaid’s Tale” since the Emmy-winning Hulu series launched in 2017, is exiting ahead of the upcoming fifth season. In a statement, she said she felt she “had to” step away “after much thought”. Bledel has received 4 Emmy nominations and one win for outstanding guest actress for her portrayal of the key character. Season 5 is expected to premiere later this year.

⇒ Wishing someone ‘Happy Birthday’ before their birthday: Many Germans believe this will cause misfortune to everyone involved. Instead, they sometimes gather the night before a birthday and begin celebrating exactly at midnight.

⇒ Changing your bed on a Friday: An old wives’ tales says if you turn your mattress that day, you’ll be cursed with bad dreams. Others say the bad-luck day is Sunday.

⇒ Renaming a boat: In ancient times, sailors believed that the name of every boat was written in the ledger of Poseidon. If you dared change the name of a boat, you’d incur the sea god’s wrath.

⇒ Mixing beers: In the Czech Republic, whose people drink more beer per capita than anywhere else, it’s believed that if you pour one type of beer into a mug containing another type, you’re in for some misfortune.

⇒ Tuesday the 13th: While many cultures see Friday the 13th as bad news, in Spain, the 13th day of the month is unlucky when it falls on a Tuesday. In Spanish, the word for Tuesday is “Martes,” which comes from “Mars”, the Roman god of war, so Tuesday spells trouble.

Potato chips are flammable, and make good kindling. Especially those powdered with seasoning.

If you unfolded your brain, it would cover an ironing board.

The stickers on fruit are edible. The glue is also FDA approved.

Apples are part of the rose family.

When scientists developed straight bananas in the 1960s, the public refused to buy them.

Question: 11% of people admit they are still at their current job because their boss allows them to do THIS. What is it?

Because I’m sure there’s an absolutely HUGE market for it, Iceland has – ahem – ‘trotted’ out a service that lets horses reply to work emails for you while you’re on holiday. The world-first “OutHorse Your Email” service is designed to encourage travelers to switch off their technology and take an uninterrupted trip to their country. How can horses reply to emails? Using a large keyboard mat, they are able to walk, trot, canter and pace their way across the keys. And you can sign up for free! Unsurprisingly, though, the result is nonsense replies to work-related emails, similar to when your cat decides to take a trip across your laptop at home. Nonetheless, the head of “Visit Iceland” said “Don’t be foal-ish, enjoy a distraction free trip to Iceland and remember, if you do receive work emails while on holiday, Iceland’s horses have you covered.” LINKS: https://youtu.be/kbfD_lX1Tog www.outhorseyouremail.com

THINGS PEOPLE OF A CERTAIN AGE WILL NEVER UNDERSTAND:

✗ Losing touch with people: Without Facebook, etc., It was very common not to have any idea what people, whom you were once very close to, are up to these days.

✗ No caller ID, and “May I speak to…”: You didn’t know who was calling, so you couldn’t ignore a call. And when was the last time you had to ask for the person you want to speak to?

✗ Cassette problems: When the tape came unravelled, the only solution was to use a pen or pencil to wind it back up.

✗ Banking hours: What if the bank was closed for the day? Or on a Sunday? Without an ATM, some of us had to write a check, and find a friendly store to exchange it for cash.

✗ Video store: To watch a newer movie at home seemed like the height of modern convenience. But first, you had to go to the store (usually Blockbuster), hope it was in stock, stand in line to rent it, then drive home to relax and watch it.

✗ Birthdays: Imagine – no Facebook reminders or notes on smartphones. You either had to have it written down, or simply remember someone’s birthday.

"I like my money where I can see it: hanging in my closet." - Carrie Bradshaw, Sex and the City