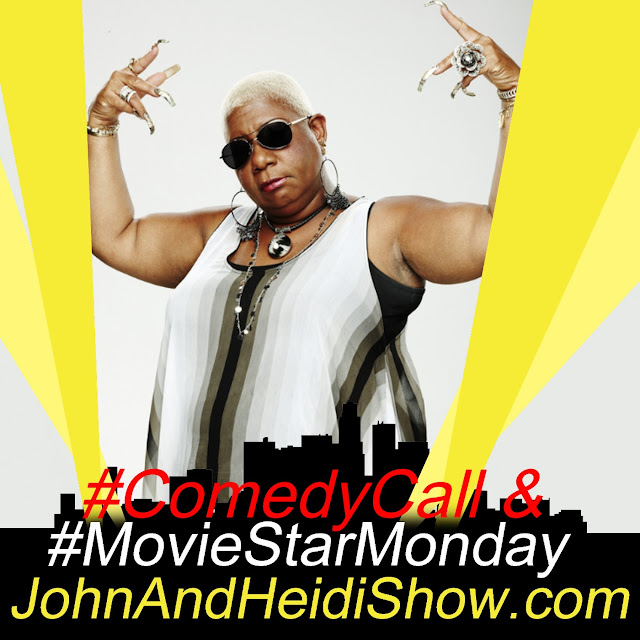 Best known for her breakthrough role as the “hooker with the heart of gold” in the blockbuster comedy “BORAT”, as well as blockbusters such as the Academy Award nominated film “A Star Is Born” with Bradley Cooper and Lady Gaga. She has done unforgettable work in the 3D animated hit “Hotel Transylvania”, “Taken 2”, and the hilarious adult sleeper comedy “That’s My Boy” with Adam Sandler.

Also, Luenell appears in two very popular Eddie Murphy movies! She is part of the all-star cast of the “Coming 2 America” sequel, starring Murphy and Arsenio Hall, streaming on Amazon Prime Video as well as the ensemble cast of “Dolemite Is My Name,” starring Murphy, currently streaming on Netflix.

But this is ALSO a #ComedyCall because Luenell is the “Original Bad Girl of Comedy.” Luenell recently participated in the Netflix Is a Joke comedy festival, which took place in May 2022 in Los Angeles.

According to a recent survey conducted by TopCashback.com, 85 percent of Americans expect to spend more on summer travel because of increasing gas prices. The survey polled a cross-section of 2,537 adults, aged 18 and over.

Summer Spending
Will you be spending more this summer than you did last year?
Yes (58 percent)
No (42 percent)

What will you be spending money on this summer? (select all that apply) (top six responses)

During the summer months — June to August — does your spending typically increase, decrease or stay the same?

Do you have summer travel plans this year?

(If yes) Do you expect to spend more on summer travel because of increasing gas prices?

(If yes) How much do you expect to spend on travel this summer (per person, if applicable)?

Do you prefer the window, aisle or middle seat?

Would you pay more to avoid the middle seat?

A former senior software engineer at Netflix has revealed why he walked away from his $450,000 per year job, which came with unlimited paid time off. Writing in a piece for Business Insider, Michael Lin says he called it quits in May 2021, and believes he ultimately made the right decision. Why did he quit? Boredom. Lin says the “shine began to wear off” his job after about 2 years, and “The engineering work began to feel like copy and paste.” He now works for himself as an entrepreneur, and though he isn’t making near the money he did with Netflix, he writes: “I’m going to trust the process that if I do work that energizes me, good things will happen.”


John Cena is returning to the ring. During Monday night’s RAW, WWE announced that Cena would be making his eagerly anticipated return exactly 20 years after his television debut in 2002. He’ll appear on the Monday night show on June 27. Cena famously lost to Kurt Angle in his debut, but earned the respect of the WWE Universe. The actor responded to the big announcement, posting on Twitter: “Been far too long and what a special occasion to be able spend with the @WWEUniverse! Laredo, TX, C U soon!!!” In January, he said on “The Ellen DeGeneres Show”: “I’m not done with WWE by a long shot. That’s my home — I love it.”

Some of the jurors in the Johnny Depp/Amber Heard defamation case struggled to stay awake during the entire 6-week trial, according to the court stenographer. A 7-person jury sided mostly with Depp in their verdict, awarding him $15 million in damages (reduced to $10.35 million due to a state law). In a new interview with Law & Crime Network, court reporter Judy Bellinger said that a “few” of the jurors drifted asleep at points during the trial. Quote: “There were a lot of video deposition, and they would just sit there and all of a sudden I’d see their head drop.” The juror’s names will be sealed for at least one year, the judge ruled. Heard, who was awarded $2 million, plans to appear the verdict.

Netflix has just given the first look at “Scream 5” star Jenna Ortega in the Addams Family reboot series “Wednesday”. In the Tim Burton-created show, Ortega portrays the title character and goth culture icon. The new teaser gives fans a look at her as the main character, rocking Wednesday’s classic look, complete with dark braids. The show will follow the Addams family daughter, as she “solves mysteries using her psychic ability.” Burton will direct the series, marking his first time helming a TV show. He’s best-known for movies such as “Batman”, “Edward Scissorhands” and “Alice in Wonderland”. No word on when, except that it’s “coming soon”. LINK: https://youtu.be/G4QHrAcZalc

During the heights of the pandemic, service workers were seeing more tips as many of us ordered in, and felt appreciative and generous toward those who put their health on the line simply by showing up for work. But according to a new report, we’re tipping less now than we did before COVID-19. According to a survey from CreditCards.com, fewer Americans are leaving tips for restaurant servers, hotel housekeepers and other hospitality industry workers versus before COVID-19, despite vowing to be more generous. At restaurants, 73% said they always tip, down from 77% in 2019, Americans today are also less likely to tip food delivery people, taxi and rideshare drivers, and coffee shop baristas than before the health crisis. Although the survey didn’t ask why, experts have a pretty good idea. They’re blaming inflation, and the fact that staffing shortages can cause longer wait times, making people less likely to tip. Only hairstylists and barbers have benefited from improved tipping habits, according to the survey.

According to a senior contributor for the finance publication Forbes, companies should be making an effort to significantly increase worker’s compensation in these times of runaway inflation. In an opinion piece, Jack Kelly writes that rather than waiting for employees to ask for a raise, empathetic leaders should proactively look after the financial well-being of their staff and discuss options to help them cope with this new economic environment. He says that if businesses don’t address the needs of their people, the best and brightest will be recruited away or they’ll leave of their own volition to pursue opportunities that offer more money. He also points out that companies have options in addition to an outright pay increase, including bonuses, stock options and enhanced benefits, or offering employees the chance to work from home, thus saving them money on expenses such as transportation and meals.

One in 10 people in the world lives on an island.

When you become really close to someone, you can hear their voice in your head when you read their texts.

Your tonsils can grow back if there was tissue left behind during the removal process.

By walking an extra 20 minutes every day, an average person will burn off 7 pounds (3.18kg) of body fat per year.

Question: Recent stats show that about a third of people do THIS more often than they did 5 years ago. What is it?

Uber has released its 6th annual “Lost and Found Index,” revealing some of the most common — and most unusual — items left behind in drivers’ vehicles. As you might expect, the most common items left behind in Uber vehicles during the past year were phones/cameras, wallets, keys, backpacks/purses, headphones/speakers, glasses, clothing, vaping devices, jewelry and IDs. And what – ahem — “unique” items were reported lost by passengers? Tater tots, a fingernail, “my grandma’s teeth,” 500 grams of caviar, a pizza costume, “a [expletive] painting of a moose,” a Billie Eilish ukulele, an employee of the month plaque, a Bernie Sanders fanny pack, a crochet strawberry, a bucket of slime, a brown tortoise and a “ball gag and stethoscope.” More than 40 riders lost their CPAP machines, more than 30 reported lost retainers, and 5 people reported lost dentures.

According to a flight attendant…

✗ Blocking the aisle: When boarding, it’s polite to step into your row and allow other passengers to go by. If you need to make adjustments before sitting , step in front of your seat and simply wait for a lull in traffic.

✗ Move out of the way, again: That point is also to mid-flight. When you are sitting in your seat -don’t spread out into the aisle. Flight attendants could trip, or you could get whacked by a cart

✗ Using headphones: Of course, you can use them at times during the flight, but take them out when speaking to flight attendants. They have a lot of people to look after, so be ready when they get to your row.

✗ Not using headphones: Definitely, you SHOULD use them when listening to music or doing other things where the sound could bother others.

✗ DON’T try to hand a used airsickness bag to a flight crew member: They don’t want it, either. Place it under your seat and ask for an extra bag to wrap it in.

A Cancer Trial's Unexpected Result: Remission In EVERY Patient
https://www.sunnyskyz.com/good-news