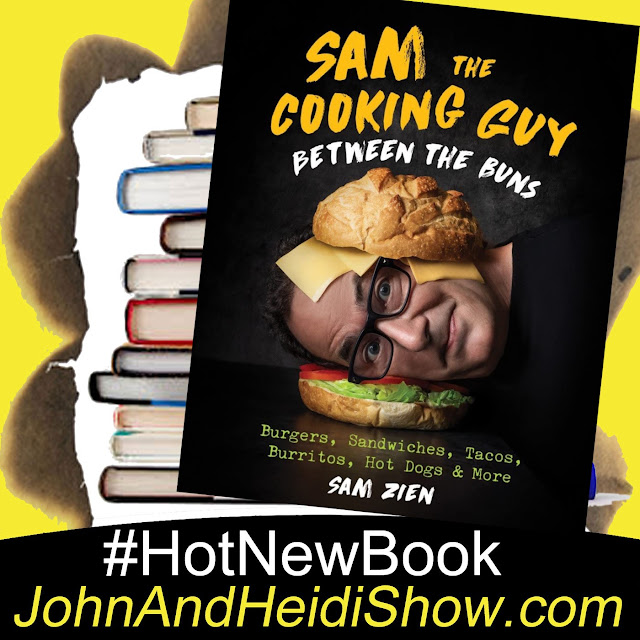 This weekend we visit with Sam The Cooking Guy about his new book, BETWEEN THE BUNS: Burgers, Sandwiches, Tacos, Burritos, Hot Dogs & More. (AVAILABLE NOW - https://amzn.to/3mss7bU)

National Corn on the Cob Day

Heavy drinkers are “healthier and happier” in their later years, according to a study. Researchers in Germany questioned hundreds of people aged over 60 at hospital for routine surgery about their mood and quality of life, and compared this with the amount of alcohol they drank. A third were categorized as those who drink “potentially unhealthy” quantities (drinking at least 4 nights a week, or regularly drinking the equivalent of 2 bottles of wine in a day). Those people were found to be slimmer, happier and more mobile than those who drank less or not at all. The study’s author says one explanation may be that higher alcohol consumption may lead to elevated mood, enhanced sociability and reduced stress. Experts warn that the study is observational – meaning cause and effect could not be determined.

If all went well over the weekend, 83-year-old Japanese sailor Kenichi Horie will have set a record, becoming the world’s oldest solo yachtsman to sail non-stop across the Pacific Ocean. He set sail on his 19-foot sailboat, the Suntory Mermaid III, from San Francisco on March 27. The plan was to come home to an arrival ceremony in Nishinomiya city. This isn’t the first time Horie’s made maritime history. In 1962, at 23 years old, he became the first person to successfully make a non-stop journey across the Pacific Ocean — from Japan to California.

Michael J. Fox has given an update about his ongoing battle with Parkinson’s disease. The “Life With Mikey” star went public about his condition in 1998 but continued working on shows like “Boston Legal”, “The Good Wife”, and “The Michael J. Fox Show”. He’s since largely retired from acting altogether and recently revealed that he doesn’t like to take roles due to not being able to remember many lines. In an interview on the podcast “Working It Out”, he elaborated, saying: “I don’t take on something with a lot of lines, because I can’t do it. And for whatever reason, it just is what it is. I can’t remember 5 pages of dialogue. I can’t do it. It can’t be done. So, I go to the beach.”

“Magnum P.I.” could join an elite group of popular broadcast series that have overcome shocking cancellations to continue their runs. Reports are that talks are underway for NBC and/or USA Network to potentially carry the series, which stars Jay Hernandez. Immediately following CBS’ surprise May 12 cancellation of Magnum P.I. after 4 seasons, Universal Television, which co-produced the series, sprung into action and started exploring potential new homes for the show. Sources say that an arrangement still is being worked out, with one scenario being for new episodes to air on NBC while USA would run previous seasons of the action drama, a reboot of the 1980s series that starred Tom Selleck.

Howie Mandel is partnering with a unique tech company that plans to make life a lot easier for a germaphobe like himself. Instead of having to show up in person, it allows you to be displayed anywhere — as a hologram in a box. Mandel has been named an advisor for Proto Inc., inventors of the world’s first 4K, volumetric, self-contained holoportation machine. Aside from keeping him away from germs, he sees it as a great way to work more efficiently. The technology makes it possible for him to do stand-up at multiple venues, all in real-time.

If you’ve ever uttered the phrase, “I just want to talk to a human” while hopelessly navigating your way through a business’s computerized phone system, then you’re going to like this: Spain’s government wants to end those nerve-shattering, one-sided conversations by making it mandatory for companies to offer a real, flesh-and-blood customer service worker when requested by a caller. That’s one of a number of measures included in a customer service bill presented by Spain’s coalition government this week. It will need the approval parliament before it can become law. Providers of basic services, such as utilities, phone and internet, will have to offer customer service 24 hours a day, 365 days a year. All other companies will have to provide customer service during working hours. The bill also seeks to do away with long wait times by forcing companies to answer calls within 3 minutes. Consumption Minister Alberto Garzón said: “These are difficulties which unfortunately waste an enormous among of energy, time and money.” Fines for breaking the law will range from 150 euros to 100,000 euros (US $160-$106,000).

In 2006, CNN listed Mark Zuckerberg and the founder of Netflix among the “10 People Who Don’t Matter.”

The Hubble space telescope is powerful enough to see a match being struck on Pluto.

About half the calories in the average fast-food meal come from fat.

Jellyfish are considered biologically immortal. They don’t age and do not die unless they are killed.

Question: Fully one in 4 people say THIS is their favorite smell. What is it?

The distinctive (and pungent, to some) smell of Vegemite wafting from an Australian factory has been declared of “significant” heritage value. The City of Melbourne council made a unanimous decision to include scent on a statement of significance for the factory – at 1 Vegemite Way in Fishermans Bend. Such a statement provides special heritage recognitions for important sites. Last year, the council stopped short of declaring the Vegemite smell “significant” when it recognized its heritage value in a bid to ensure no future development there was put in jeopardy. But during a meeting on Tuesday, deputy lord mayor, Nicholas Reece said its recognition did not mean the smell “needs to be protected”.

MAKE YOUR MORNINGS BETTER (EVEN MONDAYS):

☞ Prep the night before: Pack your bag, set out your clothes, make your lunch.

☞ Start with a stretch: It increases blood flow, and releases feel-good endorphins.

☞ Take on an easy challenge: Start your day with a mental exercise. Even Wordle works. It’ll kick-start your brain, and give you a sense of accomplishment.

☞ Move your body: Any kind of exercise is good. Even a little dance to give you a good shake-out.

☞ Give your phone a rest: Try something else first thing for a few days. You may notice you feel less anxious by avoiding messages, social media and news for the first hour.

☞ Stick to a routine: They’re proven to increase productivity, and can boost mental health if it’s manageable.

☞ Let go of what doesn’t work: You don’t need to get up at 5am to have a good morning. You also don’t need to start the day with a green juice, or immediately meditate. The best thing for you to do is to understand what works for you and what doesn’t.”

"Don't waste so much time thinking about how much you weigh. There is no more mind-numbing, boring, idiotic, self-destructive diversion from the fun of living." - Meryl Streep

Onlookers Rush To Save Motorcyclist Trapped Underneath Car
https://www.sunnyskyz.com/good-news/