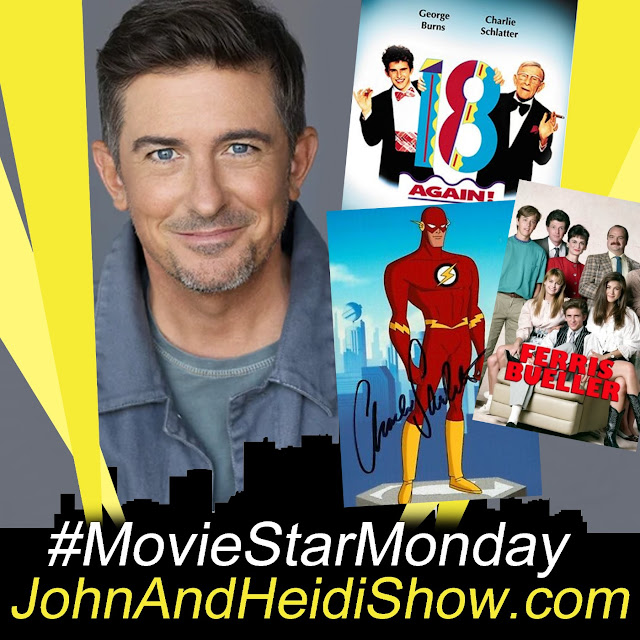 This #MovieStarMonday we visit with Charlie Schlatter. He has appeared in numerous films and television series. He's popularly known for portraying Dr. Jesse Travis, the resident student of Dr. Mark Sloan (Dick Van Dyke), on the CBS series Diagnosis: Murder and for starring in the big screen comedy 18 Again!, opposite George Burns.

Since the 1990s, Charlie’s career has shifted primarily to voice work. Among his roles are The Flash on Superman: The Animated Series, The Flash on The Batman and Batman Unlimited: Animal Instincts, the title character in Kick Buttowski: Suburban Daredevil, Kevin Levin on Ben 10, Hawk on A.T.O.M., Tommy Cadle on Pet Alien, Chris Kirkman on Random! Cartoons, Cameron on Bratz, and Doctor Mindbender, Wild Bill and Lift-Ticket on G.I. Joe: Renegades.

Maybe sometimes, when it’s too hot in your bedroom, or when you’d just prefer to be able to S-T-R-E-T-C-H right across the mattress, you look back longingly on your “sleeping-single” days. Well, this might surprise you: According to a new study, having a sweetheart to cozy up to can actually help you get a better sleep. Researchers from the University of Arizona found that those who share a bed with a spouse or partner experience better-quality sleep than those who sleep by themselves, and may even have a lower risk of issues such as insomnia and sleep apnea. However, those who often share a bed with a child reported higher levels of insomnia, less control over their sleep and have a greater risk of apnea.

Chicken tikka masala or fried nuggets would have our ancestors turning in their graves, according to new research. A team from the University of Exeter has discovered that Iron Age Europeans actually revered the humble bird, almost as a deity — rather than a delicacy. Their also found that men were buried with cockerels when they died, while women were laid to rest with hens. The findings are based on chicken remains from over 89 countries. Bones, locations, and historical records provided new insights into now local societies and cultures regarded the chicken.


The dystopian drama “Squid Game” was such an enormous hit, it’s no surprise that Netflix is turning the deadly game within the show into an actual reality show competition — minus the killings, of course. Netflix has announced that it is launching “Squid Game: The Challenge,” in which 456 real players will compete for a chance to win $4.56 million. According to the streamer, players will take part in a series of games inspired by the show – plus surprising new additions – “while their strategies, alliances and character will be put to the test while competitors are eliminated around them.” You can sign up now at www.SquidGameCasting.com


Britney Spears’ attorney Mathew Rosengart has spoken out after her former husband Jason Alexander was charged with a felony count of stalking. Rosengart said he’s pleased” by how the sheriff´s office responded to Alexander´s “infiltration” (his word). Alexander pleaded not guilty in Ventura County court to the charge, along with misdemeanor counts of trespassing, vandalism and battery. The 3 misdemeanor charges stemmed from Alexander’s attempt to get into the wedding last week, which he livestreamed on Instagram. The stalking charge involves repeated incidents over time, according to Spears’ attorney. Alexander’s bail was set at $100,000.

If you REALLY love your cat, you might as well start saving for a new couch now. A team of veterinary psychologists says that coddled cats are more likely to tear up furniture. Researchers at the Federal University of Rio Grande do Sul in Brazil say they determined that tolerance for this type of “unacceptable behavior” could be a sign of a strong human-feline bond. According to their report, published in the Journal of Veterinary Behavior, “Evidence supports that cats’ behavior influences the level of emotional closeness between the animals and the owners,” and “owners of cats that do not scratch the furniture had a lower level of emotional closeness compared to those reporting this inappropriate behavior.” Researchers believe the “surprising” correlation indicates that clawing at couches is considered an “expected and tolerable” cat habit by those who love them most.

How about a “Jack and Coke” – in a can?The makers of Coca Cola and Jack Daniel’s whiskey have announced that they’re pairing their products into a canned, ready-to-drink beverage called the Jack & Coke cocktail. Calling their new “pre-mixed cocktail option” a retail variation of a classic mixed drink, Brown-Forman Corp. and The Coca-Cola Company said the Jack & Coke cans are coming to markets worldwide, with an initial launch planned for Mexico late this year.

Humans are born with only 2 innate fears: the fear of falling and the fear of loud sounds.

All people are born with 2 basic food preferences: We like sweet foods and dislike bitter foods.

There is no butter in buttermilk.

Eye of newt, toe of frog, and wool of bat are just archaic terms for mustard seed, buttercup, and holly leaves.

Question: About 95% of us have one of these, but most of us NEVER clean it. What is it?

Many hardcore golfers go their entire life without ever sinking a hole-in-one. Frank Kowalski did it twice – in the same round. It all started with his first swing of the day. He was running late for his weekly outing at Bentley Village Golf Club last month in Naples, Florida, so he didn’t have time to practice. Using a sand wedge on the 7th hole where his group was starting, he hit a hole-in-one. Then on hole #15 — one of the trickiest on the course – he scored another ace with a 5 wood. The 74-year-old described it as the most exciting day he has ever experienced on the greens.

Lies You Actually Believed As A Teen

3. “Everyone but me has their crap together.”

11. “It’ll be so much easier to hang out with my friends once we’re in our twenties.”

12. “I’ll be able to afford a huge, gorgeous apartment as long as I get a roommate.”

14. “I can’t wait to fill that house with all the Ikea furniture that I’ll assemble myself!”

15. “Once I fall in love, everything else will just fall into place.”

16. “And dating will be so much easier once I’m not a teenager anymore."

"Look, you didn't ask me for my opinion, but I'm old, so I'm giving it anyway." - Sophia Petrillo, The Golden Girls