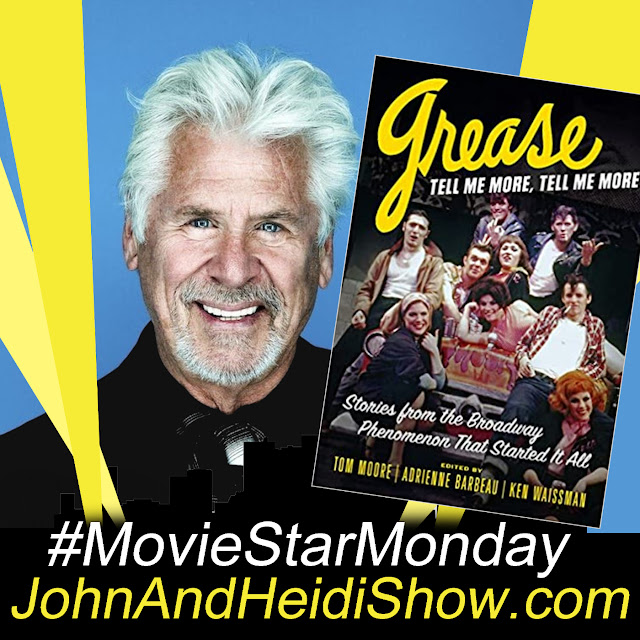 This #MovieStarMonday we visit with Barry Bostwick (Spin City, Rocky Horror Picture Show & Much More) Barry got his start in the stage production of Grease. We will visit about the new book that is out right now. “Grease, Tell Me More, Tell Me More: Stories from the Broadway Phenomenon That Started It All” AVAILABLE NOW - https://amzn.to/3OejSwr

Are you starting to plan your next family vacation? Get busy. Vacations are more enjoyable for the whole family when they’re well-planned out in advance. That’s according to a new survey of 2,000 American parents, which found that when preparing for vacations, 1 in 4 say they are the “planners” of their family — the ones who keep everyone on track and organized. Meanwhile, others name their partner or co-parent as an “agent of chaos” who always seems to cause trouble (18%) or is always running late (17%). The poll, for Chase IHG Rewards Credit Cards, also found that 76% of families are able to plan out their entire itinerary within 6 hours over a span of a few days. And six in 10 (61%) families start planning at least 5 weeks in advance. On the other hand, 28% are still frantically getting ready up to the very last minute. More than half (55%) haven’t had a vacation in at least 3 years – but 70% are planning to take one within the next 18 months.

Is better balance the key to a longer life? Middle-aged people who can’t stand on one leg for 10 seconds are nearly twice as likely to die within a decade, according to new research. Unlike aerobic fitness, muscle strength, and flexibility, balance tends to stay relatively steady until someone reaches their 50s, then it wanes rapidly. Scientists in Brazil say the balance test should become part of a routine health check for older adults.

Fans of “Jeopardy!” are buzzing on Twitter about a potential new host. Former Tournament of Champions winner Buzzy Cohen caused a stir when he shared a cryptic tweet that many believe to be a signal that he’ll be hosting the game show. Last week, fan account BuzzerBlog tweeted, “100% prepared to be wrong but still not totally believing that the Mayim-hosts-primetime-Jeopardy thing is still here. If that was still a thing I feel like the many press releases talking about ‘Celebrity Jeopardy!’ would have mentioned her by now.” Cohen replied to the tweet with a gif of Yoda saying “No, there is another.” Feeding into the theory, Cohen shared another tweet, reading: “Shout out to the camera guys on [as yet unannounced project] for convincing me to get a picopresso from @wacaco_ltd – cannot wait to get this thing going!!!”

It looks like “Top Gun: Maverick” has enough jet fuel to hit the $1 billion mark. It’s been reported that Tom Cruise’s latest blockbuster has crossed the $900 million dollar mark at the international box office in the first 25 days of its release. The total global sum is over $902 million, with domestic box office accounting for $475 million of that. The film, directed by Joseph Kosinski, is expected to cross the $1 billion mark next week. Over the weekend, the “Top Gun” sequel crossed the $800 million mark, making it Cruise’s biggest movie to date.

LONGEST-RUNNING TV SHOWS THAT ARE STILL ON-AIR:(in the US…)

⇒ “Sesame Street” Debut: Nov. 10, 1969 (52 years): The children’s series, first launched on PBS with short segments and furry Muppets, has been broadcast in more than 120 countries.

The front of a giraffe’s tongue is dark purple to protect it from sunburn while eating.

Annually, there are about 60,000 trampoline injuries in the US. And about 150 dustpan injuries.

Despite accounting for 2% of our body mass, the brain uses 20% of our oxygen and blood supply.

The fingernails on your dominant hand grow faster.

Your voice tires more quickly from whispering than from speaking in a normal tone.

Question: Stats show that you do THIS less at age 40 than any other time in your life. What is it?

These days, some people don’t have very nice things to say about Amber Heard, but no one can deny her beauty. And science says her face is almost perfect. That’s according to the so-called ‘Golden Ratio’. First described by the ancient Greeks, the Golden Ratio refers to a formula of proportions that supposedly identify the most mathematically perfect visage. British cosmetic surgeon Dr. Julian De Silva says that by using digital facial-mapping technology, he was able to determine that Heard’s face is exactly 91.85% perfect — that’s almost as good as it gets. Bella Hadid scored highest of all well-known beauties (94.35%), followed by Beyoncé, Heard, and Ariana Grande.

MOST EXPENSIVE NORTH AMERICAN CITIES TO LIVE IN:

According to a comparison of the average cost of 8 common necessities, items and services: a theater ticket, a restaurant meal, a bottle of water, a cappuccino, a gym membership, a transit ticket, and one month’s rent…