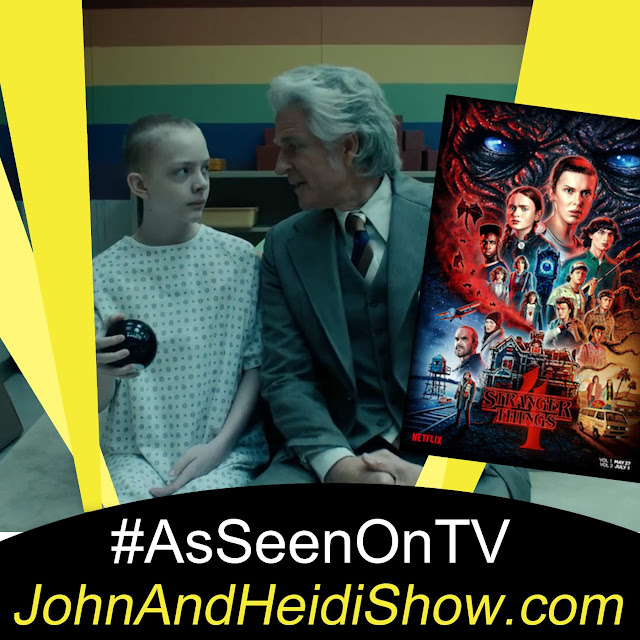 Today we visit with Christian Ganiere. He plays “Number Ten” in Stranger Things on Neflix. - https://www.youtube.com/watch?v=yQEondeGvKo

A new study says viewing art galleries and museum exhibits online can benefit your mental state and overall well-being — just like going to an arts center in person. Researchers in Vienna say cultural institutions quickly had to convert to an online format during the early months of the pandemic, making digital museums and online art galleries a popular outlet during quarantine. In the study, scientists found that after just 1-2 minutes spent looking at an online art gallery, participants reported lower levels of negative mood, anxiety, and loneliness, as well as higher subjective well-being.

Four visitors to Paris came up with a novel solution to their travel dilemma after their flights to London were canceled – they caught an Uber. And although the ride cost $1,340, and took more than 6 hours through the night, it was still cheaper and faster than trying to find an alternative flight. After looking into their flying options, and dismissing the idea of renting a vehicle, the group realized they could split the cost of an Uber and get from Charles de Gaulle airport in Paris to London by morning. The passengers found a willing Uber driver, who happened to have his passport on him, and agreed to a $605 fee, plus an additional $240 to take the train that transports vehicles from France to the UK under the English Channel.

Emilia Clarke is sharing more details about the health scares that almost ended her life. The 35-year-old “Game of Thrones” star said that she went through the “most excruciating pain” while suffering from 2 separate aneurysms in 2011 and 2013. In a BBC interview, she said: “(With) the amount of my brain that is no longer usable—it’s remarkable that I am able to speak, sometimes articulately, and live my life completely normally with absolutely no repercussions.” She also said she is “in the really, really, really small minority of people that can survive that.” Clarke recalled seeing scans of her brain after the aneurysms, saying that there’s “quite a bit missing” from that vital organ, but blood finds a different route to get around”.

It sounds like Chris Evans is ready to leave the bachelor life behind. Although he’s best known for portraying ‘Captain America’ in the Marvel Cinematic Universe, it seems he’s looking to settle down and start a family, and he says he’s “laser focused” on finding the right person. Evans stars in the new Netflix movie, “The Gray Man” as an assassin obsessed with tracking down his target, played by Ryan Gosling. When asked if he’s searching for something so intensely in his own life, Evans joked that he was “gonna give [the interviewer] a good answer”, and went on to say that, yes, he is “maybe laser-focused on finding a partner”, and added that it’s pretty difficult to make a genuine love match in Hollywood.

New emojis set to be released this year will include a shaking head, new heart colors, and a familiar goose. Unicode Consortium’s latest list contains only 31 new emojis, a much smaller release than last year’s 112. Other newbies on the Emoji 15.0 draft list are ‘Donkey’, ‘Jellyfish’, ‘Hair Pick’, and a ‘Khanda’ – the symbol of the Sikh faith, plus a moose, a comb, a donkey, a jellyfish, a ginger root, maracas, the WiFi symbol, and a “talk to the hand” icon. The inclusion of the goose emoji has drawn comparisons to “Untitled Goose Game”, where players take control of a horrible goose. The emojis will go through a final round of approval in September before they are released.

A backpack, lunch box, crayons and at least 10 hours of sleep each night are all things children need to get off to a good start in kindergarten, according to a new study. Researchers monitored the sleep patterns of kindergarteners, and had their teachers evaluate their transition into the school system. What they found is that the more consistently kids got 10-plus hours of sleep per night, the better they got along with peers and teachers, and the better their overall academic performance was. While the American Academy of Sleep Medicine suggests that kindergarten-aged kids get 10-13 hours of sleep – that includes naps. The study shows that it’s best for young school goers to have that 10-plus hours of sleep during the night. The researchers involved in the study, published in the journal “Pediatrics”, say that if your child is starting school this September, now is the time to begin the adjustment to a school-year sleeping schedule.

Only 2 mammals like spicy food: humans and the tree shrew.

The English word with the most definitions is “set.”

Space smells like seared steak, according to those who have been there.

The national instrument of Polynesia is the nose flute, played with one nostril.

Question: 36% of us order THIS at restaurants because we almost never make it at home. What is it?

An Italian couple spent just $3,500 on their dream wedding — and managed to keep it zero waste. Anna Masiello and Diogo Linhares decorated their family’s home with vegan unpackaged candles, wore second-hand or recycled clothing and ran through a flurry of heart-shaped leaf confetti and birdseed before serving their guests a sustainably sourced, plant-based menu. The eco-conscious couple, who met at a zero-waste event in 2019, jumped headlong into the lifestyle in 2020, and wanted their special day to reflect their values. 28-year-old Anna says: “This is the way we live day to day, so we wanted to apply it to our wedding day…I also wanted to prove everyone wrong that being sustainable doesn’t mean losing out on anything.” The bridal party wore second-hand outfits, and the ceremony took place at Masiello’s uncle Federico’s garden in Trieste, Italy, decorated with second-hand or rented furniture and decor. Anna, who is a sustainability influencer, had her dress designed from off-cuts of factory materials. She shared the behind-the-scenes hacks of her zero-waste wedding with her 43,000 Instagram followers.

➠ Man Reincarnated as Himself

➠ Man Takes Out Restraining Order Against Himself


"Whoever established the high road and how high it should be should be fired." - Sandra Bullock