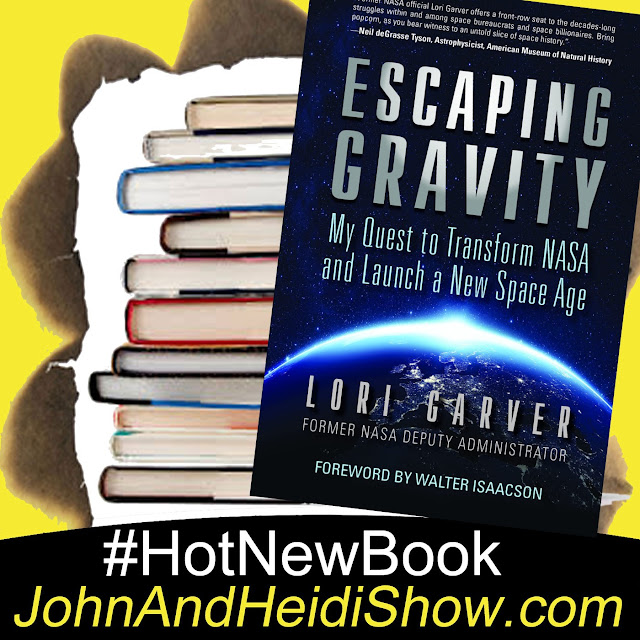 Today we visit with Former Deputy Administrator of NASA, Lori Garver, about her new bombshell book Escaping Gravity ….a tell-all about the birth, struggles, and triumphs of the Commercial Space Flight Program. AVAILABLE NOW - https://amzn.to/3znH7ik

They say an apple a day keeps the doctor away, but researchers from Aston University have found that eating more fruit may also keep the therapist away. They determined that people who frequently eat fruit are more likely to report greater mental well-being and less likely to experience depressive symptoms. Their study indicates HOW OFTEN we eat fruit is more influential on mental health than the overall amount we consume over the course of a usual week. On the other hand, study also found that people who eat more “savory” snacks, like chips, tend to deal with more anxiety.

A Canadian couple, both 100 years old, celebrated their 80th wedding anniversary last week. Lifelong love birds Charlie and Annie Muise celebrated with a party at their daughter’s place, then returned home to the house they bought together 75 years ago — for $2,000 — in Yarmouth County, near the southern tip of Nova Scotia. The couple were wed on July 13, 1942. (To put that in perspective, that’s the same day Harrison Ford was BORN!)


July 16, 2022, will go down in history as the day J. Lo officially became J. Aff. After surprising fans with news of her Las Vegas wedding to Ben Affleck, Jennifer Lopez indicated in a message emailed to fans that she’s changed her last name to match her new husband’s. In a note sent to subscribers of her “On the JLo” newsletter, she divulged the details of her Little White Wedding Chapel ceremony — from how she and Affleck almost didn’t make it there before midnight, to their photoshoot in a pink Cadillac convertible supposedly used by Elvis. But what really stood out was Lopez’s – or rather Mrs. Affleck’s — signature. She concluded her note with the words: “Love is a great thing, maybe the best of things — and worth waiting for. With love, Mrs. Jennifer Lynn Affleck.”

Chelsea Handler and Jo Koy have split up just ahead of their 1-year dating anniversary, but awkwardly, not before recording a celebratory video. Monday, Handler took to Instagram to share a heartwarming video she and Koy, also a comedian, playfully recorded ahead of their first dating anniversary. In it, she said: “In anticipation of celebrating our first year together, Jo and I recorded this video early,” before sweetly asking the “Easter Sunday” star what he had learned from being in a relationship with his “lover”. Koy responds “that it’s fun to be in love and always be in the moment.” But despite their anticipation for their 1-year dating milestone, Handler and Koy weren’t able to make it. Handler broke the news in the accompanying caption writing, “it is with a heavy heart to announce that we have decided together that it is best for us to take a break from our relationship right now.” LINK: https://tinyurl.com/3t84vbfs

Emily Ratajkowski and Sebastian Bear-McClard have gone their separate ways after 4 years of marriage. Reps for the couple haven’t commented, but a source was quoted by People as saying: “They split recently. It was Em’s decision. She is doing okay. She is strong and focused on her son.” The insider added that Ratajkowski plans to file for divorce. Speculation began last week after the model was seen running errands without her wedding ring. She’s also not wearing it in her recent Instagram photos. The two were first romantically linked in Feb. 2018. After dating for only a few weeks, the model and producer tied the knot in a surprise ceremony at N.Y.C.’s City Hall that same month.

• Baseball or basketball? [Baseball goes back to 1939, at least, while basketball started in 1891]

Elephants drink a minimum of 50 gallons (189 litres) of water per day.

A lobster’s blood is colorless, but when exposed to oxygen, it turns blue.

It is possible to be allergic to one cat, but not another.

At birth, Dalmatians are always white.

The Canary Islands are named after dogs. (Latin name: Insularia Canaria – Island of the Dogs)

Question: 45,000 Americans are injured each year by what?

For the second year in a row, an eatery in the Danish capital of Copenhagen named the best on the planet at the World’s 50 Best Restaurants awards. “Geranium” serves a meat-free, seasonally based Scandi menu in the unusual environs of the 8th floor of Denmark’s national soccer stadium. It’s open just 4 days a week, a choice made by head chef Rasmus Kofoed and co-owner Søren Ledet in order to maintain a work-life balance. According to TheWorlds50Best.com , Kofoed “has an intuitive ability to put together truly stunning dishes that make the most of colour, empty space and accurate volume of ingredients, creating synergy between flavour, aestheticism and a sense of flow that runs throughout the menu.” Geranium’s Copenhagen neighbor Noma was last year’s winner. The rest of the 2022 top-5:

• 35% of us say we get stressed driving in wet weather.

• 11% of men say they read a book for the first time during the pandemic.

• 15% of moms say they still do laundry for their adult children.

• 48% of women say they weigh themselves every day.

"Be wise, because the world needs wisdom. If you cannot be wise, pretend to be someone who is wise, and then just behave like they would." - Neil Gaiman

'That's An Angel': Family Of 11 Saved By Woman Who Alerted Them Of Raging House Fire
https://www.sunnyskyz.com/good-news