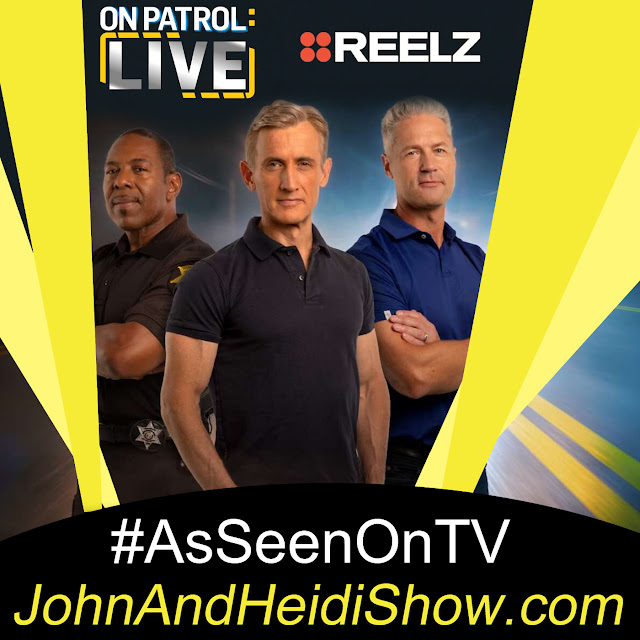 Today we visit with Dan Abrams. He hosted the hit show LIVE PD which followed police offers throughout their patrols live in real time. The long-running show was the most watched series on A&E and was frequently the #1 rated show on cable. Now, Dan is back with the new series On Patrol: Live. He reunites with his Live PD co-host Sgt. Sean “Sticks” Larkin, and documents -- live and in real time -- the everyday work of police officers on patrol across America. The series gives viewers unprecedented access to law enforcement – from routine calls and high-stakes incidents to tracking down fugitives of justice and recovering missing children. Dan Abrams is also Chief Legal Analyst for ABC News, the host of Dan Abrams Live on NewsNation, author of multiple best-selling books including Lincoln’s Last Trial and John Adams Under Fire, and has been a guest on The Tonight Show, Jimmy Kimmel Live and the Late Show with Stephen Colbert. https://www.reelz.com/show/on-patrol-live/

In the course of her life journey, the average woman will embark upon twice as many diets as sexual relationships, so says a new survey sponsored by (who else?) a diet supplement company and published in the Daily Mail. On average, the survey participants attempted sixteen diets in their lives and had eight sexual partners. We can only assume that the typical human female is all about that on-again, off-again thing with Atkins, an occasional Jenny Craig fling, going steady with Weight Watchers, and trying out the Zone before finally settling down with Mediterranean. And who could forget that hot summer with Paleo? Memories to keep you warm. https://www.thecut.com/2014/01/women-try-more-diets-than-sex-partners.html

Bioengineers at the University of Texas, Austin have engineered a new type of mattress that “tricks” the body into falling asleep faster. Body temperature influences how awake or sleepy we feel at any given moment. For instance, it’s healthier to sleep in the evening as body temperature declines. So, the research team developed an innovative mattress and pillow system that uses both heating and cooling to send a message to the body that it’s time to sleep. They say the new mattress successfully triggers sleepiness, shortening the time it takes to fall asleep, and improves overall sleep quality.

Kylie Jenner came under fire last week for posting about her private jet. She shared a pic of herself and boyfriend Travis Scott hugging between 2 planes, with the caption: “You wanna take mine or yours?” That led critics to dig deeper into Jenner’s flight habits, and now many are condemning her along with other wealthy travelers. Her private jet, named “Kylie Air” is decked out with luxuries and amenities, and according to a report, planes like these create 5-14 times more pollution than commercial planes. In the current economic climate, many followers thought it was tasteless for Jenner to brag about her jet. And with the environmental crisis worsening, many also thought it was horrifying to see her using a plane for her own convenience. And the Twitter account Celeb Jets looked into her flight history, and found that many of her flights are around 15 minutes long, and one recent flight was just 3 minutes long, covering a distance that would have taken 40 minutes by car.

Some came in wool fisherman’s sweaters, and other contestants had sportsmen’s attire. But it was the cream-colored sweater of attorney Jon Auvil that caught the eye of judges who awarded him the title for most resembling author and former Key West resident Ernest Hemingway. Auvil triumphed Saturday night over 124 other contestants for the title in the annual Hemingway Look-Alike Contest at Sloppy Joe’s Bar, the Key West establishment where the author was a regular patron during his decade-long residence on the island in the 1930s. The look-a-like contest is a highlight of Key West’s annual Hemingway Days celebration, which ended Sunday. Auvil said he shares Hemingway’s passion for fishing, has written some fiction and would like to do more writing. “Every man wants to write like Hemingway,” said Auvil, who lives in Dade City, Florida, northeast of Tampa. While living in Key West, Hemingway wrote classics, including “For Whom the Bell Tolls” and “To Have and Have Not.”

Speed dating was invented by a rabbi.

Boys are more likely to be left-handed than girls are.

Riding a roller coaster can help you pass a kidney stone.

Ironically, the most commonly misused word in the English language is “ironic”.

Question: In a typical year around 450,000 Americans finish one of these.

A man in Germany who was mugged got mugged two more times while waiting for police to arrive.

A burglar in China broke into a restaurant, carrying off more than 33 pounds of pig ears and pig tails and about 75 pounds of cooking oil.

• To another year of not finding anyone better.

• You’re 40! (…months behind in your child support payments)

• You’re the best starter husband a girl could wish for!

• Happy “Got Drunk in Vegas and Did Something Stupid Day.”

• I really thought you’d be dead by now.

• I love you… by the way, that dress DOES make you look fat.

• When I said “For better or worse”, that was actually rhetorical.


"Money can't buy you happiness, but it can buy you a yacht big enough to pull up right alongside it." - David Lee Roth