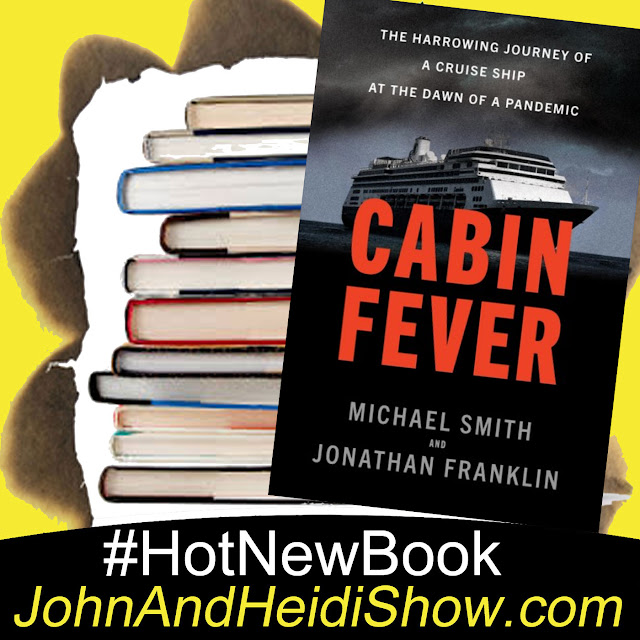 Today we visit with two authors Michael Smith and Jonathan Franklin, about their new book Cabin Fever: The Harrowing Journey of a Cruise Ship at the Dawn of a Pandemic


If you love all things indie, vintage, and obscure, then you’re likely to thrive in one of 2022’s Best Cities for Hipsters. That’s why LawnStarter ranked the 200 biggest U.S. cities: to help maximize your chances of finding a circa 1970s alpaca wool coat, cage-free eggs, and just chill vibes. We looked at 30 anti-cool factors — from access to thrift stores, farmers markets, and vinyl to unicycle- and morning rave-friendliness. Check out the 10 best cities for the modern Bohemian (and the 10 cities that hipsters would find very midtown) below. You’ll also find some of our rants and raves about the ranking results.

Tesla Inc boss Elon Musk said late on Sunday on Twitter that he and Google co-founder Sergey Brin remain friends and denied a report that he had been involved in an affair with Brin’s wife Nicole Shanahan.
https://canoe.com/entertainment/celebrity/elon-musk-had-a-brief-affair-with-sergey-brins-wife/wcm/da0d016c-3c73-456b-92f0-8b3b04c73ddb

“Friends” actress Lisa Kudrow was apparently disturbed by her son’s reaction to her role in the hit sitcom, saying this week that it felt “demeaning.” During an interview with Seth Meyers on his show, Kudrow said her 24-year-old son, Julian Murray Stern, was surprised by the humor in Friends. Kudrow said: “He was impressed. He goes, ‘It’s actually really funny”. But he seemed to be more bowled over by other members of the cast. Kudrow went on to describe her son’s reaction, quoting him as saying: “‘The guys are so funny.’ And he’s like, ‘No, I mean, you’re funny, too.’ And never in my life have I wanted to tell my own kid, like, ‘F you!’” Kudrow said that she didn’t actually say the word — but she did think it.

The National Football League has entered the streaming wars with its own league-branded service. The service, which launched this week, is called NFL+, and will offer access to live out-of-market preseason games, live local and primetime regular season and postseason games (on phone and tablet only), live local and national audio for every game, plus NFL Network shows on-demand and NFL Films archives. The service is available in the NFL App for $4.99/month or $39.99/year. NFL+ Premium costs $9.99/month or $79.99/year.

The Newport Folk Festival, known for creating electrifying musical moments — the most famous being Bob Dylan’s decision to plug in his guitar in 1965 — this weekend has a small outer stage that is being powered in part by festival-goers on stationary bicycles. The Bike Stage is the brainchild of the band Illiterate Light, an environmentally conscious indie rock duo from Virginia, who has partnered with a company called Rock the Bike to create a pedal-powered sound system, which they have already been using at small club shows. Frontman Jeff Gorman said the “Bike Stage” at the event in Rhode Island is the first time the system has been tried at a festival. About a dozen artists are scheduled to perform mostly acoustic sets on the stage. About 1,300 of the festival’s 10,000 fans rode bicycles to Newport on Friday. Gorman said when he saw that sea of bikes during the band’s appearance in Newport in 2019, he and partner Jake Cochran approached festival director Jay Sweet about setting up the stage. https://apnews.com/article/entertainment-music-rhode-island-5cb46cb3685411b11f23bec1146b7db4

When a naked man in southwestern Florida recently raised a ruckus outside his house and threatened a deputy with a kitchen knife, the SWAT team swooped in and apprehended him. Soon afterward, Lee County Sheriff Carmine Marceno stood on the man’s driveway in combat gear for a news conference while the suspect went to the jailhouse that the sheriff likes to call the “Marceno Motel.” “He’s an oxygen-stealer and a scumbag, and I’m glad he’s outta here,” Marceno told reporters. “I’m proud to say that in this county, if you present deadly physical force ... we meet you with deadly force every time, and we win. It’s pretty clean, pretty quick.” The Sunshine State has become internationally notorious for the oddball miscreants who populate its police blotters and local news reports — known collectively as Florida Man. There are murders and mayhem, like anyplace else, and then there are the only-in-Florida incidents like the man charged with assault with a deadly weapon for throwing an alligator through a Wendy’s drive-thru window in Palm Beach County in 2015. https://apnews.com/article/police-florida-fort-lauderdale-ed03521826c0f70b1d455b4e7fc3e6cb

Sweat doesn’t stink. It’s the bacteria on your skin that breaks the sweat down that causes an odor.

Sharks can live for 5 centuries.

Question: New stats show that men do THIS 4 times faster than women do. What is it?

A Knoxville woman was arrested after she allegedly stole an electric wheelchair from the Kroger located at 5201 Broadway Avenue. Officials with the Knoxville Police Department said that officers found Victoria Elander, 53, traveling down the street near the Citgo gas station located at 4801 Broadway Avenue. Officers responded to the area because Elander was causing traffic issues in the wheelchair by riding on the street instead of the sidewalk. Elander refused to ride on the sidewalk when asked, the release said. When officers asked where she got the wheelchair, she reportedly told them she stole it from Kroger. Elander told officers that she took the wheelchair because she was having trouble picking up her medicine, and also said she had “various mental and physical conditions,” according to the release. Elander was taken into custody and management at Kroger was made aware of the stolen cart, which they later confirmed to police was from the store. https://www.wvlt.tv/app/2021/09/21/knoxville-woman-steals-electric-wheelchair-grocery-store-police-say/


"The Lord gave us two ends: One to sit on and the other to think with. Success depends on which one we use the most." - Ann Landers

Man Survives 18 Hours At Sea By Clinging To A Soccer Ball That Floated To Him
https://www.sunnyskyz.com/good-news/