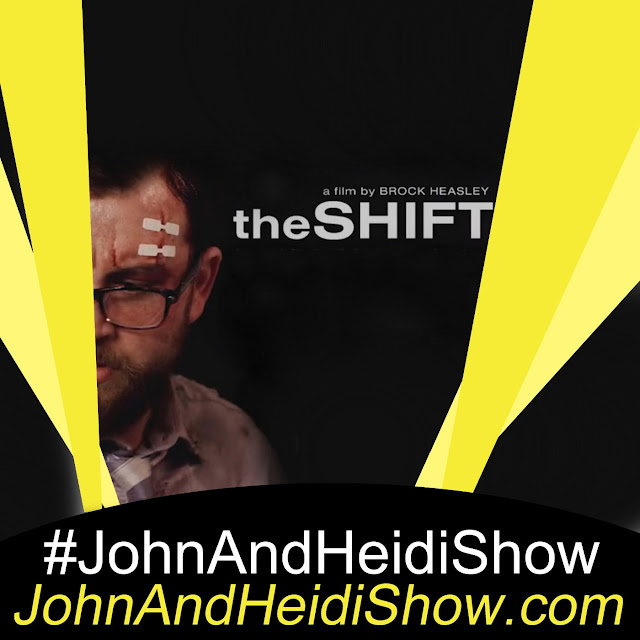 Today we visit with Brock Heasley. He is a filmmaker who is working on a fascinating new project to create a faith-based film, in a unique way. With the help of believers who want to help fund the project. The movie is called “The Shift” and you can see a short film here... and learn how you can get information about investing in this film. https://invest.angel.com/theshift-3

The type of beer you drink may reveal more about you than you might believe. The survey showed that lager drinkers tend to be more extroverted and go out with friends on a typical Saturday night. So it’s no surprise that this group was also found to embrace meeting and interacting with new people more than others. Ale drinkers were found to be bigger flirts, and they feed off of being the life of the party. Yet an ideal night for this group would, surprisingly, consist of them simply staying in, relaxing on the couch and enjoying a documentary on Netflix, or reading a good book. A preference for ale also showed a preference for the arts over sports. Lager drinkers, meanwhile, were found to have higher stress levels and spend more time worrying about the future. That could be why they place a strong emphasis on hard work and value showing up to their job on time compared to those who love ales. That said, it’s not that ale drinkers aren’t into their careers. After all, they were more likely to say they’re satisfied with their job. They’re also more prone to feeling like they’re leading a happier, fulfilling life overall. Yet despite their more easy-going nature, ale-heads were found to be more easily frustrated and intimidated than their lager counterparts in the study. One’s beer preference is also tied into their pet preference. Lager lovers were more likely to have a dog, while ale drinkers showed a link to loving cats. Some other findings: Lager drinkers tended to have a lower salary (about $38,000) on average than those who prefer ale (about $41,000). They also enjoy action, thriller, or adventure movies, whereas ale drinkers enjoy romance, animation or documentaries.

Two women were arrested at a Bangkok airport and accused of smuggling after 109 live animals were found in their luggage. Thailand’s Department of National Parks, Wildlife and Plant Conservation said the wild animals were discovered in 2 suitcases following an x-ray inspection. Officials called to the scene discovered 2 white porcupines, 2 armadillos, 35 turtles, 50 lizards and 20 snakes in the 2 pieces of luggage.

Danny Bonaduce is shedding some light on his mystery illness. The 62-year-old “Partridge Family” alum said on ABC news that he “was hoping for a diagnosis but did not get one” after announcing the health scare and subsequent hiatus from his Seattle’s radio show in April. He says he wasn’t able to walk, nor balance, adding that he was “afraid of everything,” including stairs. He says that although his ailment remains a mystery, doctors have ruled out a stroke. The “Breaking Bonaduce” star returned to his radio gig on Monday and plans to use his platform to get fans to take control of their health. He asks them to “Take time to consider your health, what you’re doing. Pay attention.”

Christian Bale wouldn’t mind taking on the role of Batman, again. He told Screenrant that he’d slip on the Batsuit again — but on one condition: Christopher Nolan returns as director. Bale starred in Nolan’s Dark Knight trilogy from 2005-12, playing the superhero in “Batman Begins”, “The Dark Knight”, and “The Dark Knight Rises”. Bale said: “In my mind, it would be something if Chris Nolan ever said to himself, ‘You know what, I’ve got another story to tell.’ And if he wished to tell that story with me, I’d be in.”

People have been left aghast by a video demonstrating a potential AI-piloted aircraft that “would never land”. The concept of the “Sky Cruise” is basically a giant flying hotel that boasts 20 nuclear-powered engines and would have the capacity to carry 5,000 passengers in “the epitome of luxury,” suspended high above the clouds. Berlin-based designer Hashem Al-Ghaili calls the aircraft the ‘future of transport’, explaining that conventional airlines would ‘ferry’ passengers to and from Sky Cruise, which would never touch the ground and would have all repairs carried out in-flight. A greatly detailed video also promises restaurants, a gigantic shopping mall, a gym, theatre and even a swimming pool – all in the sky. Sky Cruise also features a panoramic hall, offering breath-taking 360-degree views of the outside. Al-Ghaili promises no air turbulence, jet-lag, or motion sickness. When asked how many pilots it would take to fly the Sky Cruise, the designer responded: “All this technology and you still want pilots? I believe it will be fully autonomous.” LINK: https://tinyurl.com/bde62yrv

Almost 163,000 pints of Guinness beer are wasted in facial hair each year.

Canada has more than 3 million lakes, roughly 60% of the world’s total.

Caffeine affects men more strongly than women, and women metabolize it about 25% faster.

Can soft-serve ice cream be hot? The small Japanese town of Hirata is daring tourists to try its ultra-spicy habanero-laced ice cream. Sprinkled with habanero pepper powder, this special ice cream is so hot, people need to sign a waiver before trying it. Those brave enough to give it a shot can opt for varying degrees of hotness, with the most extreme – ‘hellish spiciness’ – being offered at no charge if the challenger can finish it.

The phrases "Wait? What" and "no worries" are now on a list of "banished" words for 2022 published by a Michigan university on Friday.

"Wait, what?" topped that list, a decision that officials defended by stating that the two four-letter words should "not go together under any circumstances."

"Avoid error in and exploitation of everyday language," the university wrote. "In short, do the opposite of what the public and the media did this year."

Last year, seven of the ten phrases chosen reflected real-world concerns over COVID-19, whereas this year, three out of ten phrases were COVID-19 related. The majority were conversational-based.

The university has published the list since 1976, citing the need to "uphold, protect and support excellence in language."

LSSU vets thousands of submissions and has published over 1,000 entries, including one submitted by late comedian George Carlin in 1994.

The university announced they've already opened for submissions for 2023