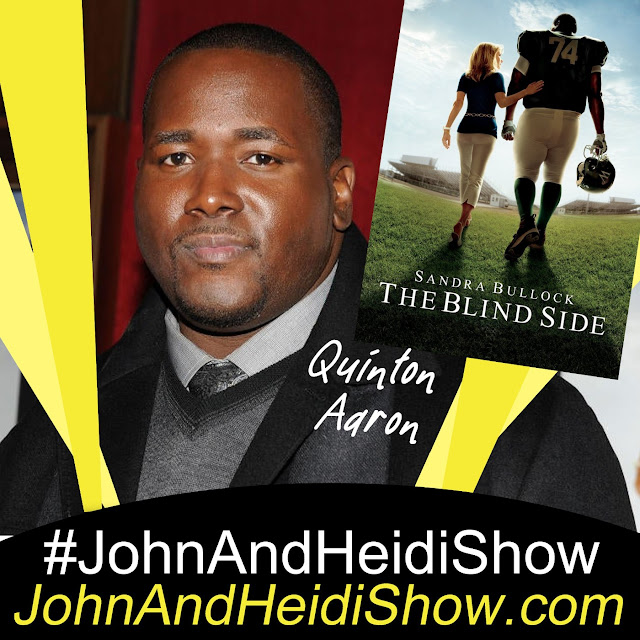 Today we visit with Quinton Aaron. He made his film debut in Michel Gondry's Be Kind Rewind. Quinton is best known for his portrayal of real-life American football player Michael Oher in the hugely successful ‘The Blind Side,’ a film in which he starred opposite ‘Academy Award’-winning actor Sandra Bullock.

Besides doubling up as a production entrepreneur and a professional fund-raiser, Aaron has also done extensive work as a philanthropist, a motivational speaker for school children, and an advocate against bullying.

He can currently be seen in The Wedding Pact 2: The Baby Pact, which premiered June 14 on Pay-Per-View, Video On Demand, and other Major Platforms. https://www.youtube.com/watch?v=lmEnJ_iT0x0

He is also making music now in Nashville.

• 16% of adults say they only eat ice cream when it’s hot outside.

• 3% say they haven’t used a pen or pencil in the last year.

• 70% of adults say they can’t sleep when there’s a spider in the room.

• 75% of women wish their partner held their hand more.


The gun used in the fatal shooting on the “Rust” movie set could not have been fired without pulling the trigger, according to an FBI forensic report. Alec Baldwin shot cinematographer Halyna Hutchins on the set of the Western, which he was producing and starring in, last year. Baldwin believed he was handling a “cold gun” — one without live ammunition – but a live bullet struck Hutchins, killing her. The film’s director, Joel Souza, was also wounded in the shooting. The FBI report says: “With the hammer fully cocked, the gun ‘could not be made to fire without a pull of the trigger while the working internal components were intact and functional’. Baldwin has repeatedly insisted that he did not pull the trigger.


Amber Heard is replacing most of her legal team and leaning into the US Constitution as she prepares to appeal a multi-million defamation verdict awarded to Johnny Depp. The move to cut loose her main attorney, Elaine Bredehoft, follows weeks of judicial jockeying by both of the “Rum Diary” co-stars to have another kick at the courtroom can with notices of intended appeals. Having seen ex-husband Depp awarded $10.4 million by a Virginia jury on June 1 after a 6-week trial, Heard has now hired David L. Axelrod and Jay Ward Brown to represent her attempt to rescind the judgment. Specializing in the First Amendment freedom of speech clause in America’s founding document, Axelrod and Brown served as counsel to the New York Times’ successful battle against Sarah Palin’s libel suit over a 2017 editorial.

Johnny Depp has lined up his first film directing gig in 25 years. A quarter-century after he directed both himself and Marlon Brando in 1997’s “The Brave”, his feature directorial debut, Depp is set to get behind the camera for “Modigliani”, about Italian artist Amedeo Modigliani, and will co-produce alongside Al Pacino and Barry Navidi. Based on the play by Dennis McIntyre, the film will tell the story of the painter and sculptor in Paris in 1916. Long considered by himself a critical and commercial failure, Modigliani navigates a turbulent and eventful 48 hours that will become a turning point in his life, ultimately solidifying his reputation as an artistic legend. Production is set to start in Europe in spring, with casting to be revealed soon.


TIPS TO HELP YOU LIVE LONGER:

There’s no magic pill that can prolong your life, but there are several ways you can add years to your lifespan…

⇒ Protect your heart: This involves taking a number of steps, including eating a diet high in fruits and vegetables, and low in processed foods. Get 7-8 hours of sleep per night, and maintain a healthy body weight. Also, keep your cholesterol, blood sugar, and blood pressure in the normal range.

⇒ Do strength training: Lift weights or use resistance bands. Muscle strengthening exercises have been shown to reduce the risk of dying by 10-17%.

⇒ Quit smoking: You saw this coming from a mile away. This advice also includes any other use of tobacco products, and vaping.

⇒ Eat mushrooms: Mushrooms are the only dietary source of a potent antioxidant and anti-inflammatory amino acid. Some scientists call mushrooms a “longevity vitamin”.

⇒ Exercise: Aim for at least 30 minutes every day — especially if you have high blood pressure or diabetes. It will help regulate your blood pressure, and help avoid heart disease or stroke later on.

⇒ Limit animal protein: Studies have shown that by focusing on a more plant-based diet, you can increase your longevity.

The first-ever movie with outtakes in the credits was “Smokey and the Bandit” (1977).

You can learn the High Valyrian language from “Game of Thrones” through an online course.

The chance of you dying on the way to get lottery tickets is actually greater than your chance of winning.

There are 92 known cases of nuclear bombs lost at sea.

The word “gorilla” is derived from a Greek word meaning, “A tribe of hairy women.”

To your fish, tapping on the aquarium glass is as loud as a rock concert.

Question: Studies show that parents tell their kids “No” almost 2 dozen times a day. What is the #1 thing that they most often say “No” to?

If your dog gets stressed when riding in the car, try playing some Bee Gees! Researcher Sam Sutton, senior lecturer of music at the University of West London, has compiled what he calls the perfect playlist to soothe your dog’s nerves in the car…and it also includes some Bob Marley, mon. Sutton cites recent research at the University of Glasgow which suggests music can affect dogs’ behavior. They found that dogs displayed positive behavioral changes when exposed to certain music types. Reggae and soft rock appear to be the canine tunes of choice.

"You can't have a million-dollar dream with a minimum-wage worth ethic." - Zig Ziglar