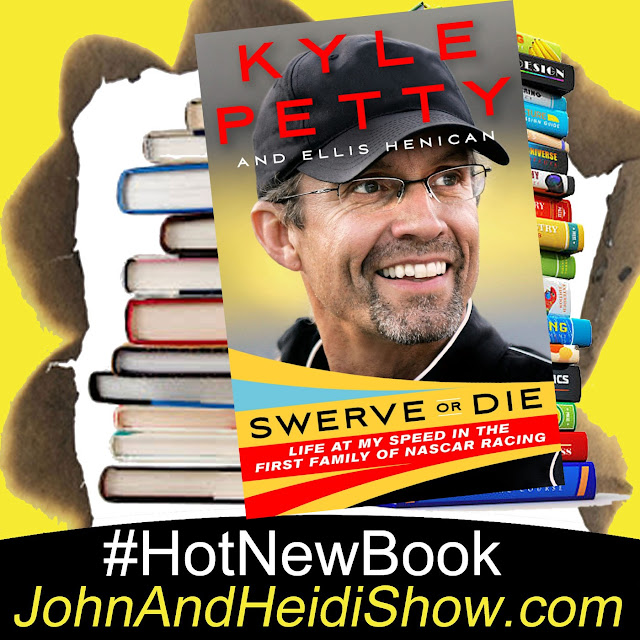 Today we visit with Kyle Petty, Stock-car racing star, country singer, and sports broadcaster. His new book is out now. Swerve or Die: Life at My Speed in the First Family of NASCAR Racing. - https://amzn.to/3PKUM8g

This is an insider account and history of the NASCAR world from one of its biggest stars, Kyle Petty.

A new study says that performing random acts of kindness has a bigger impact on the recipient than people realize. Researchers from the University of Texas at Austin found that not only does the recipient of a good deed generally feel more positive after these interactions, they also “pay it forward”, spreading the kindness and generosity to others. Those who do good deeds typically focus on the object or service they’re providing — such as giving a gift or helping someone cross the street. What the study determined is that recipients of good deeds focus more on the feelings of warmth the act evokes. Simply put, recipients of an act of kindness care more about the thought someone put into this gesture, rather than the gift itself. The researchers summed up their study by saying: “Performers (of acts of kindness) don’t realize how much of an impact they’re having on people…and that can stand in the way of these behaviors.”

Japan wants young people to drink more alcohol. Yes, you heard that correctly. The Japanese government has launched a contest to find new ways to encourage young people to drink more because the country’s alcohol sales and liquor tax revenues have plummeted since the beginning of COVID-19 restrictions. The “Sake Viva!” campaign invites people to submit ideas on how to “stimulate demand among young people” for alcohol through new services, promotional methods, products, designs and even sales techniques using artificial intelligence or the metaverse. The winner will receive support for their plan to be commercialized.


Four months after the slap seen around the world, Will Smith is feeling the after-effects more than Chris Rock. Data from Q Scores, the longtime industry standard for quantifying celebrities’ star power and appeal, indicates Smith’s numbers tanked months after the Academy Awards ceremony, when he smacked presenter Chris Rock on live TV. Before the incident, Smith consistently ranked among the top 5 or 10 most positively rated actors in Q Scores’ semi-annual surveys. This placed him alongside such beloved figures as Tom Hanks and Denzel Washington. But between Q Scores’ January survey before the Oscars, and July, Smith’s positive Q Score plummeted from a stellar 39 to 24, (A positive Q Score of 24 means 24% of those surveyed who know of Smith count him as one of their favorite personalities.) At the same time, Smith’s negative rating more than doubled. Smith’s wife Jada Pinkett Smith also saw significant damage to her public image, and in contrast, Chris Rock’s ratings were unaffected by the slap.

Will Smith appears to have social media — and adorable animals — on his mind. In his first social media post since the Oscars ceremony on March 27 that does NOT directly reference the infamous moment when he slapped Chris Rock onstage, Smith took to Instagram on Friday to post a short video of a young gorilla earning the ire of a much larger gorilla by poking it multiple times in the backside. His caption: “Me trying to get back on social.” Among those commenting was TV’s former ‘Dog Whisperer’ Cesar Millan, who wrote, “Animal kingdom is with you Will.” Smith’s ex-wife, Sheree Zampino, responded with a heart emoji.

“Dive bar” isn’t just a country song anymore – now it’s an ice cream flavor. An ice cream BAR flavor, naturally. Miller beer has partnered with Tipsy Scoop, which sells liquor-infused ice cream, to give people the chance to eat the flavors of a classic dive bar and celebrate the 100th anniversary of the ice cream bar. It combines a “delicious peanut swirl,” as an ode to “the saltiness of the quintessential dive bar snack” with a hint of tobacco smoke flavor “reminiscent of that unforgettable dive bar scent.” The stickiness of the floor is even captured by the “gooey caramel swirl,” and carbonated candy is mixed in to provide the “iconic Champagne of Beers effervescence in every bite.” And it’s all tied together by dark chocolate to “evoke the dark wood and dim lighting ambiance that all good dives share” — and the bars even contain 5% alcohol. 6-packs are available online for $36. LINK: https://tipsyscoop.com/products/highlifeicecreamdivebars

In 2010, Nintendo trademarked the phrase “It’s on like Donkey Kong”.

There are 12 times more trees on Earth than stars in the Milky Way.

Rainbows are actually circular. We don’t typically see a full circle rainbow because the Earth’s horizon blocks the lower part.

Question: A survey found that 40% of people say they are more productive when their working environment has THIS. What is it?

A Texas dad who wrangled an alligator at his front doorstep says he knew what to do from years of watching “Crocodile Hunter” Steve Irwin on TV. Mike Trinh of Houston thought his young daughter was joking when she told him a gator was blocking the door on the first day of school. The restaurant owner threw a towel on the alligator’s head to calm it down. Then he got on the gator’s back, held its mouth closed, and enlisted his 19-year-old daughter to tape its mouth shut. Trinh and a friend then loaded the alligator in the back of a truck and released it into a nearby pond. On Facebook, he wrote: “All my years watching Steve Irwin, I figured I can deal with any wildlife as long as it ain’t a stingray.”

• Asked to switch seats on the plane because I was sitting next to a crying baby. Apparently, that’s not allowed if the baby is yours.

• “You’re not the boss of me,” I whisper under my breath, as I make 4 different lunches for my kids.

• I’m approving my kids’ friends based on which parents I think would drink wine with me during play dates.

• My 4-year-old just shut the bathroom door on me while I was inside and told me I was in jail. So I locked the door. I love this game.

• Watching “Frozen” again with my daughter because we paid $19.99 to download it so she’s going to watch it every day until college.

• Apparently a 2-year-old getting her hair washed and an exorcism sound oddly similar.

• Just taught my kids about taxes by eating 38% of their ice cream.

• Kids are just so… so… Awake in the mornings.”

• My parents had it so easy. When they gave me my first Polaroid, they never had to say “Oh and please don’t take pictures of your junk.”

Better to remain silent and be thought a fool than to speak out and remove all doubt. - Abraham Lincoln

Yes, cats are said to have 9 lives, but it’s rare that they SAVE lives. When Brit Sam Felstead suffered a heart attack while sleeping, her 7-year-old cat, Billy, noticed and began jumping on the 42-year-old’s chest and meowing as loud as he could. Felstead says the cat “doesn’t normally sit with her, but he knew something was wrong”. With Billy’s efforts, Felstead woke up, realized she could not move on her right side and asked her mother to get her to hospital. Felstead underwent an angioplasty and is now back to work as a receptionist.