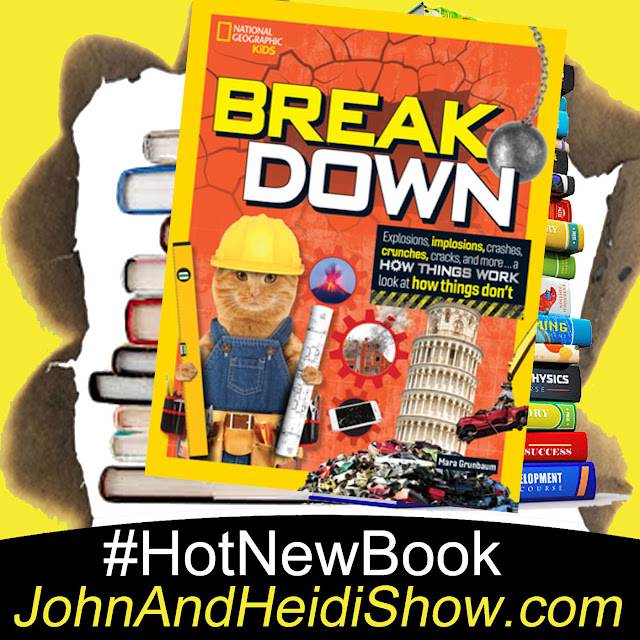 This weekend we visit with Mara Grunbaum BREAKDOWN! from NatGeo Kids is a how-things-work look at how things don’t work. Aimed at middle-graders and written in a high-energy style by award-winning science journalist Mara Grunbaum, it is filled with incredible photos and fun facts and covers all kinds of things that crash, crumble, and break (including some by design, like bike helmets) as well as colossal disasters. https://amzn.to/3QNRxhN

A new study claims to have determined how many minutes of exercise per week could help you live longer. The research, published in Circulation ― the American Heart Association’s scientific journal, found that people who went above and beyond the minimum guidelines of 150 to 300 minutes of moderate physical activity per week had a lower risk of premature mortality. Research shows that that those who work out 2-4 times above the moderate physical activity recommendations (300-600 minutes per week) saw the most benefit. Those who exercised that much had about a 27% lower risk of mortality.

It’s not exactly “American Idol”, but the votes are in, and America has chosen its winner. Emmitt Bailey, an 8-year-old from Menomonie, Wisconsin, was announced Sunday as the winner in the kids’ division for the USA Mullet Championships. What started with 688 contestants, then to the top 25 of the nation’s finest mullets, was eventually boiled down to one champion. Bailey, who got 9,896 votes, took home $2,500 in cash. Cayden Kershaw from Wausau, Wisconsin, won the teen’s division with 3,215 votes. Registration for the open mullet division is still open through next Wed. Contestants must be at least 19, and must submit 3 profile pics of themselves showing off their mullet. There is a $10 fee to enter, and half of that is donated to Michigan Wig Foundation for kids. LINK: https://mulletchamp.com/

History was made at HBO with the debut of “House of the Dragon”. The “Game of Thrones” prequel drew 9.99 million viewers across linear and HBO Max platforms in the U.S. Sunday, the largest audience for any new original series in the history of pay cabler. It was the best series launch to date on HBO Max in the US, Latin America, Europe, the Middle East, and Africa. The debut also topped Game Of Thrones’ 2011 premiere by almost 350% in terms of viewers. Of course, there was no HBO Max back then, and streaming was a minor part of the TV industry. The House of the Dragon premiere was also a hit on social media, where fans showed up to celebrate the return to Westeros. On premiere day, House of the Dragon was the longest trending topic on Twitter, ranking #1 for 14 hours straight, and trended #1 on Google Trends.

Ryan Gosling is in talks to join Margot Robbie in a new “Ocean’s Eleven”, according to reports. The project would see the duo reteam after playing ‘Ken’ and ‘Barbie’ in Greta Gerwig’s hotly-anticipated “Barbie” movie, which is due in theaters next year. Warner is eyeing a 2023 production start for the Ocean’s movie, which is not officially greenlit yet. It’s set to be directed by Jay Roach, with Robbie co-producing. Roach and Robbie previously collaborated on 2019’s “Bombshell”, for which she earned an Oscar nomination for Best Supporting Actress.

Some of the fun and weird foods available at Toronto’s Canadian National Exhibition, on now through Sept. 5:

• Croffles: A croissant and waffle combination, this dessert comes topped with soft ice cream options such as tiramisu, Oreo, chocolate banana or fruit.

• Also available: ketchup and mustard ice cream, mac and cheese lemonade, and deep-fried coffee. Or perhaps you’d like to try the 2-foot long taco, or the bacon ice cream sandwich?

One trait of intelligent people is being easily annoyed by others, but saying nothing in order to avoid a meaningless argument.

Like humans, ants spend only about a fifth of their day working.

If you point your car fob to your head, it increases the signal range.

Question: A survey showed that we are most likely to do THIS on a Wednesday than any other day. What is it?

Elon Musk has unveiled more details about his company’s futuristic artificial intelligence robots, which he says will be able to perform our “boring” chores by the end of the year. Standing at around 5’ 8” (173cm), Musk’s ‘Tesla Bot’ could eliminate menial tasks and become a commonplace item in most households, taking care of everything from cooking, cleaning, mowing grass and general maintenance. But keep in mind that Musk is well known to make outlandish estimations on the actual release date of his technology. He said the bot will be able to carry 45 pounds (20kg), lift 150 pounds (68kg), and will be able to run 5 mph (8kph). Musk said the machine is designed so that humans can easily run away from and overpower it.

• Cellphones or GPS? [In 1973, Motorola researcher Martin Cooper made the first-ever mobile cellphone. The first GPS satellite launched in 1978]

Light travels faster than sound. This is why some people appear bright until you hear them speak. - Alan Dundes