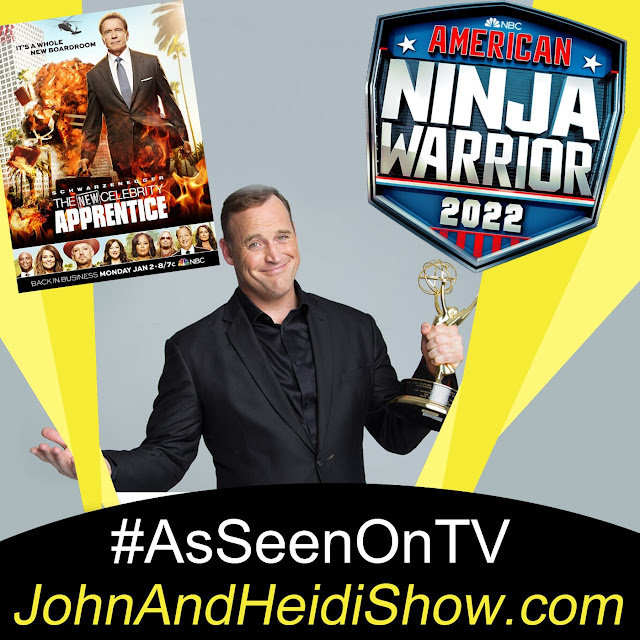 We are currently in the final weeks of Season 14 of "American Ninja Warrior" returns with some of the most elite athletes in the country competing on the world's most difficult obstacle courses. Hosts Matt Iseman, Akbar Gbajabiamila and Zuri Hall are back to call the early-round action in San Antonio and Los Angeles with the National Finals in Las Vegas. The new season will mark the return of the lowered age requirement, which opens the door to a new era of competitors as young as 15 years old. Each season, the obstacle courses continue to evolve and become even more challenging for competitors of all ages, while the sport itself simultaneously grows rapidly across the country with kids embracing it in record numbers. A top prize of $1 million will go to the winner who can conquer all four stages at the National Finals in Las Vegas. To get there, competitors will need to make it through the qualifying rounds and Semifinals. https://www.nbc.com/american-ninja-warrior

You’ve heard the saying “Stay in your lane”? Well, how about “Stay in your league”? Researchers from the University of Missouri-Columbia say that they’ve found that relationships between 2 people of “similar desirability” tend to last longer and are more successful. In a study, it was determined that not only are people who share a similar level of attractiveness more likely to end up in a relationship together, those relationships are also more likely to “go the distance”. Simply put, the study authors believe people who “outkick their coverage” won’t be with their attractive partners for very long.

When the US lottery Mega Millions jackpot grew to $810 million last month, one boss wanted all his employees to be in on the big draw. Todd Graves, founder of fast-food chain Raising Cane’s, spent $100,000 to buy 50,000 tickets, one for each of the 50,000 employees at the chicken chain with locations in 35 states. He wrote on Twitter: “Buying 50,000 lottery tickets is harder than you think! Hoping to share the winning jackpot with our 50,000 @RaisingCanes Crew.” His plan was that if any of the 50,000 tickets produced a winner, Kumaran would distribute the prize across all employees, calling it a “collective ticket for everybody.” If Tuesday’s draw didn’t produce a winner, Kumaran said he would “buy until there is a winner”. There was no winner for that drawing so he did it again for the big jackpot that was over a billion dollars.

Brad Pitt is now the proud new owner of a historic — and very expensive home. The 58-year-old actor and architecture aficionado has reportedly purchased a $40 million home in the Carmel Highlands on the California coast, located on a seaside bluff and marking one of the most expensive real estate deals ever made in the area. The cliffside bungalow is said to be known as the D.L. James House, named for the American writer who commissioned its design in 1918. The house was designed by Charles Sumner Greene of the influential 20th-century architecture firm, Greene and Greene. The closing price goes down as one of the most expensive ever to happen in the Carmel area.

Netflix has grand plans to turn “The Gray Man” into a sprawling spy franchise. Days after the $200 million-budgeted CIA thriller landed on the streaming service, Netflix announced plans to expand the series with a sequel and a spinoff, both of which are currently in development. Ryan Gosling and directors Joe and Anthony Russo are set to return for the sequel. Co-writer Stephen McFeely, whose credits also include “Avengers: Endgame” and “Captain America: Civil War,” is writing the screenplay. The directors said: “The reaction to The Gray Man has been nothing short of phenomenal…With so many amazing characters in the movie, we had always intended for The Gray Man to be part of an expanded universe, and we are thrilled that Netflix is announcing a sequel with Ryan, as well as a second script that we’re excited to talk about soon.”

A report found that today’s pop music is louder and has less variety than pop music of years past.

A video has gone viral of a man who filmed a 6-foot shark biting his pinky finger off.

Petting and cuddling with a dog can significantly enhance your well-being, according to research from the University of British Columbia. Study authors assigned student volunteers to one of 3 groups. One group could interact with a therapy dog, but with no touching. Another could interact and touch their therapy dog, and a third group met with a dog handler and no pup at all. Students assigned to the “interact but don’t touch” group showed some improvements across various measures of well-being, including happiness, integration into the campus community, stress, loneliness, and “self-perceptions of flourishing.” But the group actually permitted to touch and pet their therapy dogs experienced the most benefits. And it was the only group that displayed big improvements across all well-being factors. While several studies have found canine-assisted interventions improve participants’ wellbeing, there has been little research into what interactions provide the greatest benefits.

Hershey’s Kisses are named that after the “kissing” sound the chocolate makes as it falls from the machine on the conveyor belt.

Even though Fruit Loops come in different colors, they all have exactly the same taste.

The television was invented only 2 years after the invention of sliced bread.

A full bladder is about the size of a softball.

Bullfrogs do not sleep.

The first “Star Wars” movie was expected to be a flop.

Question: 15% of adults say THIS was the ultimate job when they were a teenager. What is it?

Answer: Working in a movie theater

A California burglar returned to the scene of the crime after he forgot his keys inside a donut company’s corporate office. The thief stole some petty cash from Johnny Doughnuts’ office in the San Francisco Bay Area, but in another twist, he also grabbed the keys to a bakery vehicle, but didn’t steal the vehicle itself. The burglar had to double back to the scene of the crime because he forgot his own keys during his first visit. Police are seeking the public’s help to identify the man, who was caught on surveillance video.

• Grandmother of Eight Makes Hole in One

• Babies are What the Mother Eats