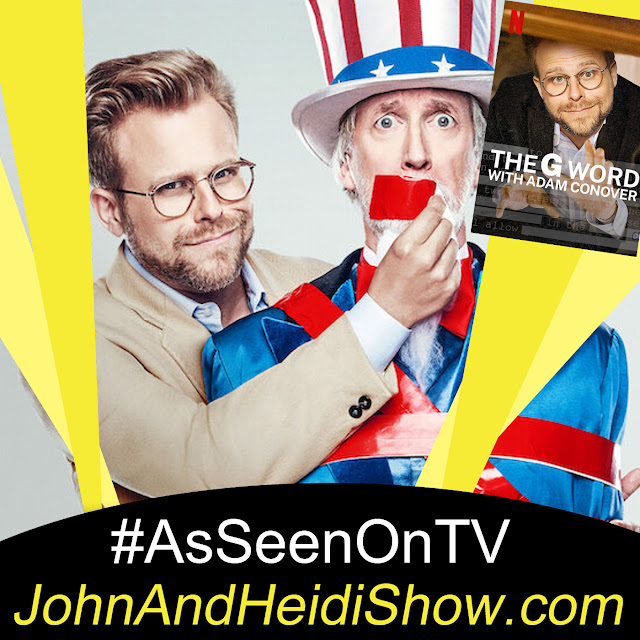 Today we visit with Comedian/Producer/Writer Adam Conover. He brought his investigative comedy spin to Netflix for the new series The G Word. This fun series discusses how the American government functions, and this is more important now that ever. Adam is covering how the government is involved in Money, the Weather, Food and Disease among other topics this season. “The G Word” debuted all episodes in May. www.Netflix.com

In these days of telecommuting and ‘digital everything’, you might think that no one relies on their computer more than you do. But what about your kids? According to a study, students spend 40 hours a week on their laptops. In research involving 600 young adults, who have been a full-time student in the past 5 years, found that on average, 7 hours of laptop time is used (each week) for schoolwork, and another 6 is taken up with Zoom classes or lectures. Video games were the most popular extra-curricular activity, with 7 hours each week spent playing on laptops, while nearly 20 hours went to streaming shows and movies using social media and shopping. 63% of students claim they couldn’t live without their laptop.

Rattlesnakes shake louder to make listeners think they are closer than they actually are, and can trick the ear into believing they are right beside the snake, according to new research. Study lead Boris Chagnaud of Karl-Franzens-University-Graz in Austria, wrote: “The acoustic display of rattlesnakes, which has been interpreted for decades as a simple acoustic warning signal…is in fact a far more intricate interspecies communication signal. The sudden switch to high-frequency mode acts as a smart signal, fooling the listener about its actual distance to the sound source. The misinterpretation of distance by the listener thereby creates a distance safety margin.”

The CEO of Instagram has defended the app’s shift to video content, following criticism from Kylie Jenner and Kim Kardashian about the new format. In a video posted to Twitter (of all things…) Adam Mosseri said: “It’s not yet good, and we’re going to have to get it to a good place…” Mosseri indicated that Instagram is experimenting with “a number of different changes to the app,” with the intention of giving users “a more full-screen experience”. He also addressed “concerns” from users who are unhappy with the new video-first design, likely referencing resistance from Jenner and Kardashian, who both posted Instagram Stories saying, “Make Instagram Instagram Again” on Monday.

If you’re holding your breath for a “Dawson’s Creek” reboot, Katie Holmes advises you to take a deep inhale – and forget about it. This week, the star who found fame as ‘Joey Potter’ on the show, said that there’s no interest among her and her former castmates, including James Van Der Beek, Joshua Jackson, and Michelle Williams, to reprise their roles as former Capeside High students. Holmes said that while she’s definitely grateful for the experience of starring in the show, and the cast has discussed the possibility of a reunion, she feels “like that show captured that time period and that time in all of our lives.” And: “Do we want to see them at (this) age? I don’t know. I don’t think [so]. We all decided we don’t actually.”


MYTHS ABOUT THE HUMAN BODY THAT YOU’VE SEEN OVER AND OVER:

(Even though they aren’t true…)

☞ Swallowed gum stays in your gut for 7 years: Yes, the digestive system has problems breaking gum down. But although gum can stick around for a week or so, it’s eventually going to be disposed of.

☞ Shaving your body hair makes it grow back thicker or darker: It’s only a trick of perception, because shaving gives the follicles a blunt tip, rather than a tapered one.

☞ We only have 5 senses: No one is actually sure how many we have. John M. Henshaw, a mechanical engineering professor who wrote “A Tour of the Senses: How Your Brain Interprets the World”, thinks we have 9: the original 5, plus balance, temperature, proprioception (body awareness), and pain.

☞ Zapping someone whose heart stopped will save them: If a person has flatlined, the correct procedure is CPR and a high dose of adrenaline. Instead of starting a stopped heart, a defibrillator is meant to correct “arrhythmia or erratic heartbeat.”

☞ Fingernails continue to grow after death: While the nails and hair on a corpse may seem like they’ve continued growing, what you’re seeing is the skin around them retracting as it becomes dehydrated, making them appear longer.

☞ Rust gives you tetanus: Not really. We associate rust with the bacteria that causes tetanus because the bacteria is often found in soil that’s rich in organic material that also makes metal rust. Plus, a rusty nail creates the perfect “tunnel” through which the bacteria can enter the body.

☞ Urine is sterile: Nope. Multiple studies have found bacteria in the urine of healthy humans. It may be harmless, or present in small amounts, but it’s there.

One of the side effects listed on an Aspirin package is ‘headache’.

Question: Doing this, you can save about 1,160 gallons of water a year. What is it?

Answer: Peeing in the shower

A New Jersey family is suing a funeral home for $50 million after its employees allegedly put the wrong woman in their mother’s casket. The family of 93-year-old Kyung Ja Kim claim staff at Central Funeral Home in Ridgefield mixed her up with another woman and put her in their mother’s clothes, before almost burying her. Kim’s daughter, Kummi, thought her mom was “younger-looking”, but chalked up the difference in appearance to the embalming process. But as the casket was lowered into the ground, the director showed Kummi a photo on her phone of her mom still at the funeral home, causing her to collapse. The funeral director subsequently pulled the casket from the ground without an explanation. The family later learned that inside was another Korean woman who shared the same last name.

THE NINE MOST-HATED WORDS IN THE ENGLISH LANGUAGE:

2. Flap: It can be used to refer to a bird in flight, or extra skin, or…well, you get the idea.

3. Whatever: Wikipedia defines it as “a slang term meaning ‘whatever you say, ‘I don’t care what you say, or ‘what will be will be.’

4. Dude: It’s a word that you either love or hate. Those who love the term have made it applicable to any and all situations. But “dude’s” extensive range of uses has made it annoying to non-users.

5. Like: Used the way it usually is these days, it’s, like, a filler word with no real purpose.

6. Literally: Another word that people love or hate. Some people use the word literally, like literally way too much.

7. Flaccid: Oxford defines it as “soft and hanging loosely or limply, especially so as to look or feel unpleasant.” For example, “she took his flaccid hand in hers.” You get the picture.

8. Panties: The word itself is innocuous, but for some reason, it makes some people uncomfortable.

9. Pus: It is used to define a thick yellow fluid produced by the body as a response to an infection. No wonder people find it gross.


"If you are not yelling at your kids, you are not spending enough time with them.” - Reese Witherspoon