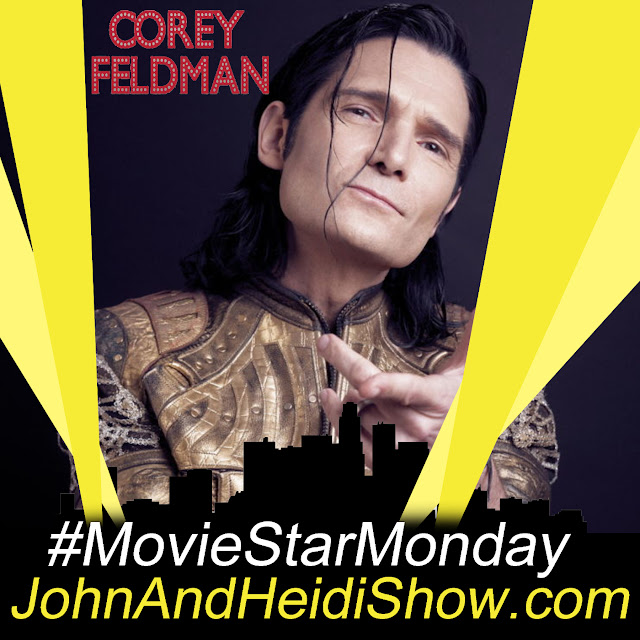 This #MovieStarMonday we visit with iconic actor/musician/activist Corey Feldman. (The Lost Boys, The Goonies and Stand By Me, The Burbs & Many More)

He is hitting the road for a tour to promote the release of his new album “Love Left 2: Arm Me With Love”

His upcoming Love Retours Concert Tour, kicks off on August 17 and runs through September 18. The tour has a total of 25 stops across the country and will be Corey’s first tour in 5 years.
https://coreyfeldman.net/category/home/

A new survey shows that over one in ten Americans — 11 percent, to be exact — consider themselves to be shopaholics. This is no surprise, particularly considering the survey was done by CouponCabin.com, a website that lures people into buying things they probably don’t need by offering temporary discounts. A new CouponCabin.com survey reveals that 15 percent of U.S. adults report their shopping habits have put them in debt, with 20 percent of saying the most amount of shopping debt they’ve been in exceeds $5,000 [sic]. Two-in-five (41 percent) said at their peak, they’ve been in more than $1,000 of shopping debt. This survey was conducted online within the United States by Harris Interactive on behalf of CouponCabin.com from May 14th – 16th, 2013, among 2,052 U.S. adults ages 18 and older. https://www.prnewswire.com/

The average person eats food off the floor about 4 times per month. That’s according to a new poll of 2,000 Americans, which found that 44% of us follow the so-called “5 second rule.” That’s the common rule of thumb that says if you drop food on the floor, you have 5 seconds to pick it up and eat it without worrying about cleanliness. What’s more, just over half of people agree that there are some places they are willing to extend the rule to 10 seconds. Where? Their own home (63%), a restaurant (55%), and a hospital or medical facility (55%). But, of course, we all have our limits. Some places where people would never consider eating food off the floor include: bathrooms (60%), public streets or sidewalks (59%), and airports (57%).

“Dancing with the Stars” judge Bruno Tonioli has shared the reason for his decision to quit the British version of the show. The effervescent Italian had appeared as a judge on “Strictly Come Dancing” since its debut in 2004, but was finding it increasingly difficult to juggle shows on either side of the Atlantic and was concerned about the toll it was taking on his health. In an interview, Tonioli revealed he “just couldn’t fly any more.” Tonioli said at one point on the UK show, he “blanked”, and there was a moment where he “did not know where I was or what I was doing.” Tonioli says it’s a miracle that he survived his schedule as long as he did.

Jennifer Lopez has some big news to share. Well, some more big news. A week after her surprise Las Vegas wedding to Ben Affleck, the newlywed and birthday girl (who turned 53 on Sunday) is expanding her business empire with the launch of JLo Body by JLo Beauty, and she’s celebrating with a campaign featuring a photo of her in the nude, as well as a shot focused on one of her most famous assets. The debut product offered by JLo Body is a Firm + Flaunt Targeted Booty Balm, priced at $65. Lopez says it’s something she’s been thinking about her “whole life,” having grown up watching her mother’s struggle with cellulite. She says her product can give you a more toned-looking derriere, and it can also be used on your arms, waist and thighs.

A woman who admitted her role in a scam that raised $400,000 using a fake story about a homeless man received a one-year prison sentence in federal court Thursday. Katelyn McClure was also ordered to make restitution and serve three years’ supervised release. The 32-year-old Bordentown, New Jersey resident is scheduled to be sentenced on state charges next month and could receive more prison time. A message was left Thursday with an attorney representing McClure. McClure and her then-boyfriend, Mark D’Amico, fabricated the story about homeless veteran Johnny Bobbitt Jr. giving McClure $20 when she ran out of gas on a Philadelphia highway in 2017. In truth, state and federal prosecutors said, the group had met near a Philadelphia casino in October 2017 shortly before they told their story. They publicized the story through local and national media interviews and created a GoFundMe account that more than 14,000 people donated to, thinking the money was to help Bobbitt, according to prosecutors. Law enforcement began investigating after Bobbitt sued the couple, accusing them of not giving him the money. https://apnews.com/

A self-professed Taco Bell lover is exclusively eating food from the fast-food restaurant for 30 days – and plans to improve his health by doing so. 30-year-old Sam Reid of Lexington VA started his odd odyssey on Sunday, and plans to sample everything on the menu at least once — and some items a lot more than that – by the time he ends his mission on Aug. 22. Reid feels that the Mexican-inspired restaurant has a “relatively healthy or healthy-adjacent menu as compared to some of the other fast-food restaurants.” He started his quest after getting readings for sodium, blood sugar and cholesterol, and will be tested again at the end of the month. He’s also working with a dietician to ask about the types of food he can have on this diet that will help him control his fiber. And, no, he does NOT intend to skip dessert. He says: “I love some Cinnabon Delights.”

In 2005, Australian Parliament responded to citizen complaints by banning staff from using the word “mate” while at work. The new rule was overturned within 24 hours.

Too much nutmeg can kill you.

Question: 21% of people have tried to make themselves smell better by doing this.

Answer: By rubbing dryer sheets on themselves!

A former nurse has been sentenced to two years probation after pleading guilty to mailing dog poop and a sanitary napkin with a patient's blood on it to her husband's ex-wife. According to the U.S. Attorney's Office for the Eastern District of Tennessee, Della Marie Gibson, 37, accepted a plea deal and pleaded guilty Monday to two counts of sending biohazardous materials through the mail. Gibson had faced state and federal charges after investigators said she took blood from a patient at Parkwest hospital, put it on a sanitary pad and mailed it to her husband's ex-wife on or around April 9, 2021. Gibson admitted to investigators that she used blood from a patient at Parkwest and would "normally dispose of the blood draw, but instead set it aside," arrest warrants from early April revealed. She told federal investigators who interviewed her at the hospital that she did it because "she wanted 'the kids' to know the truth about [her husband's ex]." Lathum said her husband's ex-wife was "lazy, didn't work and lived off the system," according to federal court documents. On another occasion around April 9, court documents said Lathum mailed her husband's ex a FedEx envelop containing dog poop and a letter with derogatory comments. https://www.wbir.com

A CNN feature story is calling it “Classic Rock’s Farewell Tour”. At arenas and stadiums across the world, never before has such a grizzled group of rock icons graced so many major stages at the same time. The problem? It’s not likely to happen again. Here are the names and ages of some of the music superstars who are on the road this summer, some of them on “farewell” tours…others well, it just might turn out to be their farewell tours too…

"When my kids become wild and unruly, I use a nice, safe playpen. When they're finished, I climb out." - Erma Bombeck

Mom Was On The Verge Of Tears From Her Kids' Meltdowns, Then A Stanger Blessed Her
https://www.sunnyskyz.com/good-news