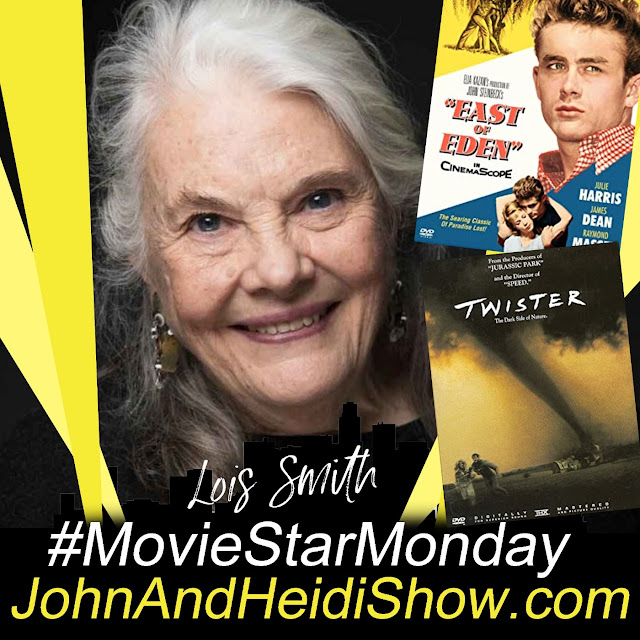 This #MovieStarMonday we visit with a living legend. Lois Smith's first film was East of Eden with James Dean. Many others followed, including The French Dispatch, Uncle Frank, The Comedian, Five Easy Pieces, Minority Report, Twister and so many more!

She is now in a new movie “MACK & RITA” in theaters now. A 30-year-old writer (Elizabeth Lail) spends a wild weekend in Palm Springs and wakes up to find she has magically transformed into her 70-year-old self in this delightful comedy starring Oscar winner Diane Keaton. https://mackandritamovie.com/

If you think salespeople can be pushy, rude, and obnoxious, it turns out you just might be right, because a new study has found that these jobs attract people with dark personalities. Researchers from a group of US universities conducted 2 studies to analyze how negative traits affect salespeople. Those traits include Machiavellianism, narcissism, and psychopathy, which collectively form the “Dark Triad.” Outside of CEOs, lawyers, and celebrities, salespeople scored higher for these dark traits than any other profession.

Meat-flavored candy corn? Why not? The football-themed Brach’s Tailgate Candy Corn featuring hot-dog and a hamburger-flavor, plus fruit punch, vanilla ice cream and popcorn-flavors, hit US shelves last week. The special mix will be available through October and will be priced around $3 per bag. A 2019 survey named candy corn the worst Halloween candy.

If there was any doubt that big names would get behind Johnny Depp again following his legal win over Amber Heard, lay them to rest. Sources say that Dior has just inked a deal with the actor to the tune of 7 figures. Depp has signed back with Dior for a multi-year deal to be the face of their Sauvage men’s scent. He first signed with Dior in 2015 as the face of the cologne, but after Heard made her allegations, the Sauvage commercial stopped airing on TV.

A British woman has run into the Guinness World Record book by completing 106 marathon distances on 106 consecutive days. 35-year-old Kate Jayden of Derbyshire began running 26.2 miles (42.2km) every day on Dec. 31, 2021, and finished her marathon of marathons on April 15. Guinness has just now certified her record…with a twist: Jayden’s feat was later equaled by Scottish duo Fay Cunningham and Emma Petrie. The three women now jointly hold the record.

A strong-stomached California man has broken the Guinness World Record for wolfing down ghost chili peppers. Gregory Foster, who previously broke a record by finishing 3 Carolina reaper chili peppers in 8.72 seconds, added another title by taking on the record for most Bhut Jolokia chili peppers — also known as ghost peppers — eaten in one minute, downing 17 of them. His intake was measured at 3.98 ounces, beating the record of 3.42 ounces, which was set by Canadian speed-eater Mike Jack in 2019.

Actor Bill Murray uses a 1-800 number instead of an agent or manager.

Women are attracted to the combined scent of Good & Plenty licorice candy and cucumber.

It’s a myth that people are either “left-brained” or “right-brained.”

It is impossible to imagine a new color.

Question: 27% of women say they feel younger when they have THIS. What is it?

Here’s something you don’t see every day: a pro baseball player’s phone falling out of his pocket while he playing. While Pittsburgh Pirates 2nd baseman Rodolfo Castro was playing against the Arizona Diamondbacks on Tuesday night, Castro’s phone fell out of his back pocket while he was sliding headfirst into third base. And seeing that phone slide out of Castro’s pocket was an even MORE weird and unexpected moment, when you consider that bringing a phone or any electronic device with you into the dugout is against the rules. The only devices allowed are MLB-approved iPads and PitchCom, the wireless communication system for pitchers and catchers. MLB is said to be considering disciplinary action. LINK: https://tinyurl.com/2p8rmdra

Rather than breaking your fingernails when trying to get a key off a ring, use a staple remover.

If you can’t find a flathead screwdriver, use a plug. Basic power plugs usually fit medium and large-sized screws.

Needing a quick, cheap way to clamp your bag of chips, use a clip hanger.

If you’re one of those people who happen to injure your fingers every time you try to hold a nail while hammering, use a clothespin to hold the nail instead of your fingers.

If your bedroom happens to be small you can always set your mattress atop a storage unit to create more floor space.

Got ink on your brand-new tee? Don’t panic, there’s a solution. Drop a bit of hand sanitizer on the stain to dissolve the ink. Follow up by throwing the shirt in the wash.


"I like work. It fascinates me. I can sit and look at it for hours." - Jerome K. Jerome