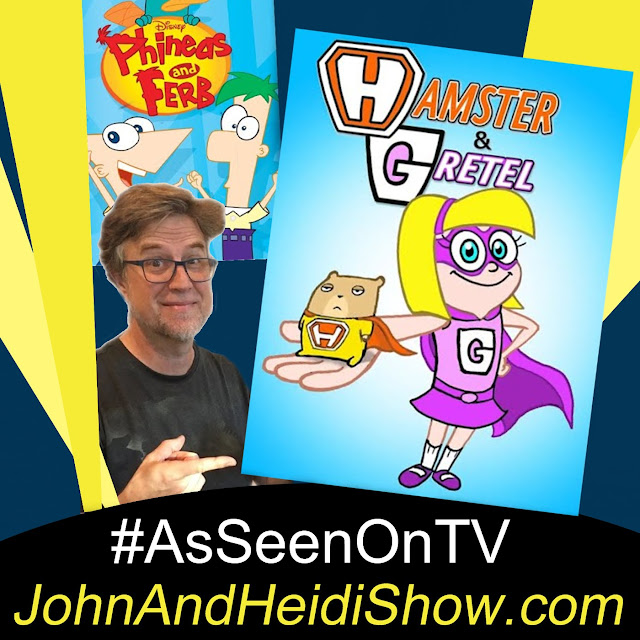 Today we visit with Dan Povenmire, co-creator and executive-producer of Disney's five-time Emmy® Award- winning series "Phineas and Ferb," With over 25 years of experience in directing, storyboarding and writing, Povenmire has worked on multiple critically acclaimed animated series including "Family Guy," "SpongeBob SquarePants," "The Simpsons," "Rocko's Modern Life" and "Hey Arnold!” He voices Dr. Heinz Doofenshmirtz and additional voices on Phineas and Ferb.

He has a new animated series "Hamster & Gretel” on Disney Channel and Disney+ TRAILER: https://www.youtube.com/watch?v=7xdQ0ebGnNE

Do men really die younger than women? Nope – that’s a myth, according to a new study. Researchers from the University of Southern Denmark found that men actually have a good chance of outliving women — especially if they’re married or went to college. The study determined that men have generally had a 25-50% chance of outliving women over the last 200 years. That number includes men on all continents, spanning 199 countries. Simply put, between 1 and 2 out of every 4 men have outlived the average woman over the last 200 years.

The human brain is not meant to be awake after midnight. That’s according to researchers from Mass General Research Institute. Moreover, they say staying up late only leads to more impulsive behavior and high-risk decisions, such as drinking, overeating, gambling, or criminal activity. Specifically, the researchers suspect that staying awake during the biological circadian night (the middle of the night for most people) causes neurophysiological changes in the brain, which causes people to view the world more negatively than they do during the daytime

MOVIE OPENINGS:
• “Fall” (PG-13, Mystery-Thriller): For best friends Becky and Hunter, life is all about conquering fears and pushing limits. But after they climb 2,000 feet to the top of a remote, abandoned radio tower, they find themselves stranded with no way down. (Grace Caroline Currey, Virginia Gardner, Jeffrey Dean Morgan)

• “Mack & Rita” (PG-13, Comedy): A 30-year-old writer spends a wild weekend in Palm Springs and wakes up to find she has magically transformed into her 70-year-old self. (Elizabeth Lail, Diane Keaton)

• “Emily the Criminal” (R, Crime-Drama, limited): Emily is saddled with student debt and locked out of the job market due to a minor criminal record. Desperate, she takes a shady gig as a “dummy shopper,” buying goods with stolen credit cards supplied by a handsome and charismatic middleman. (Aubrey Plaza, Theo Rossi)

• Would you rather be able to change the past or see into the future?

• Would you rather have night vision or be able to breathe fire?

• Would you rather be able to turn water into a soft drink or bread into cake?

• Would you rather be a famous director or a famous actor?

• Would you rather have a completely automated home or a self-driving car?

In Asia and England, a black cat is considered lucky.

A Facebook analysis found that most breakups occur (or are posted) in the 2 weeks before Christmas, around Easter…and on Mondays.

“Phobatrivaphobia” is a fear of trivia about phobias.

Question: One in 5 married people secretly dislike THIS about their partner. What is it?

You’ve heard of “adventure tourism”? Well, tourism can’t get much more adventurous than this: The online platform “Visit Ukraine.Today” is selling guided day tours of the country’s so-called “Brave Cities” that have defied and continue to resist Russian invaders, offering travelers a look at how the country is living amid conflict. The company’s website invites would-be visitors to “Set off on a journey to awesome Ukraine right now.” Those who sign up can expect walks among bomb debris, ruined buildings, cathedrals and stadiums, as well as burned-out military hardware, plus the regular wail of air raid sirens. Despite international alerts warning against travel to Ukraine, the company says it has so far sold 150 tickets, and its website offering information on safely traveling to and from the country is getting 1.5 million hits a month. By the way, encountering landmines is also a risk.

• Whyzit the words ‘worth’ and ‘price’ have generally the same meaning, while ‘worthless’ and ‘priceless’ are complete opposites?

• Whyzit I’m all grown up and I still don’t know how to use call waiting?

• Whyzit the elevator always comes after you have just put down your bags?

• Whyzit only adults have difficulty with child-proof bottles?

• Whyzit whenever you decide to run a red light, the driver in front of you chickens out?


"I hate housework. You make the beds, you wash the dishes and six months later you have to start all over again." - Joan Rivers