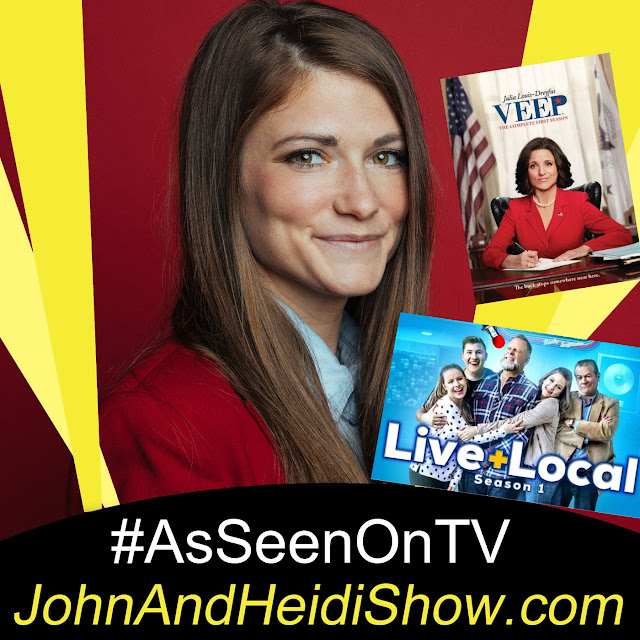 Emily Pendergast is best known for her hilarious career on VEEP (as Jonah's wife Beth Ryan) and she is co-starring starring in the six episode family comedy Live+Local streaming on Pure Flix.

Live+Local also stars Dave Coulier (Full House), Pat Cashman and Kendra Ann Sherill. OVERVIEW: "TnT In The Morning" is the highest-rated local radio program on K-HUGG radio - but Tommy (Coulier) and Tina (Pendergast) have to navigate the ups and downs of the radio industry while trying to trust their new producer, Jerry (Cashman).

Watch what happens when a veteran radio talk show host and his co-host have to navigate the ups and downs of the radio world when their new producer takes over. The trailer is available at https://youtu.be/hgT05oLp3y8

She will next be seen in the HBO series WHITE HOUSE PLUMBERS opposite Woody Harrelson, Justin Theroux and Kathleen Turner. She appeared in Judd Apatow's Netflix show "Love" and voiced on "Mike Tyson Mysteries"

Emily and her husband Cory went viral when she gave him an awful quarantine haircut: https://www.buzzfeed.com/kristatorres/oh-dear-this-does-not-look-good

When that dreaded warning light appears on your car’s dashboard, how long does it take until you head to the mechanic for service? If you’re a young adult, it seems you’ll wait…until you have a whole collection of them. According to a OnePoll survey of Gen Zers and millennials (born between 1991 and 2012), it takes an average of EIGHT warning lights for people to schedule vehicle maintenance. 27% said that in light of inflation and the current economic landscape, they’re OK to disregard and continue driving with a broken radio, and 26% can ignore dull wipers, excessive emissions, low tire pressure light, oil change, or scratches on their vehicle. On average, it takes 5 breakdowns for Gen Zers and millennials to buy a new car. They say they’ll eventually stop driving their car and get a new one when the upkeep surpasses their budget (39%), or when there are too many strange sounds or smells (38%) — or when too much of it is being held together by tape (37%).

If your neighbor has a home security system, you might want to close the blinds — fast! According to a poll, many people aren’t just using their surveillance cameras to keep the house safe – they also use it to spy on the neighbors. In a survey of more than 1,000 Americans who have home security cameras, one in 4 people admit to using their cameras to peek at what their neighbors are up to. And one in 7 confessed that, at some point, their system has caught a neighbor walking around naked. And it turns out Gen X homeowners are most likely to use their cameras to spy on others. Younger respondents actually use their cameras for the exact opposite purpose. Three in 10 Gen Z respondents said they use their security system mainly to avoid people who knock on their door.

Anne Heche is in stable condition and expected to survive following the fiery accident that left her severely burned Friday. A rep for the 53-year-old said: “Her family and friends ask for your thoughts and prayers and to respect her privacy during this difficult time.” That came a day after the “Six Days Seven Nights” actress crashed her blue Mini Cooper into several buildings before it caught fire. Video obtained by TMZ shows the movie star *quote* “driving like a maniac” down a residential LA street before crashing into a parking garage. Bystanders tried to help her out of her vehicle, but she reportedly backed up and drove off before crashing into another home, triggering an explosion and an engulfing fire.

Anne Heche will have to give a blood sample to police after crashing her car into a home in Los Angeles. The LAPD received a warrant to test the “Six Days, Seven Nights” star’s blood to see if she was under the influence of drugs and/or alcohol at the time of the crash, according to reports. Police believe Heche was intoxicated when she plowed her blue Mini Cooper into a house Friday and sustained severe burns after the vehicle caught fire, but blood test results could take weeks. Sources say that, at the minimum, the LAPD will refer Heche’s case to the LA City attorney, who could press hit-and-run charges, as she reportedly slammed into a garage and drove off before driving into the nearby house.

Researchers say guppies are able to reproduce after they die.

There’s a smartphone app that can detect if you are depressed!

➢ Three people die annually from using their tongue to check if a battery works.

➢ About 2 people per year are killed after being crushed by falling vending machines.

➢ It costs the US treasury 2.1 cents to make and distribute a penny.

➢ The risk of concussion in cheerleading is higher than in gymnastics.

➢ Parasites account for 0.01% of the average person’s weight.

➢ The average pitch of Australian women’s voices has decreased by 23 hertz since 1945.

➢ In a poll, 1% of Americans named Jesus “the greatest American of all-time.”

When the computer mouse was invented, it was called the “X-Y Position Indicator for a Display System.”

The only number whose letters are in alphabetical order is 40 (f-o-r-t-y).

Question: A survey found that the average person does THIS about 16 times per day. What is it?

A French scientist has apologized after tweeting a photo of a slice of chorizo, claiming it was an image of a distant star taken by the James Webb Space Telescope. Étienne Klein, a celebrated physicist and director at France’s Alternative Energies and Atomic Energy Commission, shared the image of the spicy Spanish sausage, praising the “level of detail” it provided, considering that it is “located 4.2 light years away from us.”. After thousands retweeted and commented on his startling photo, Klein admitted the image was, in fact, a close-up of a slice of chorizo taken against a black background, and wrote: “no object related to Spanish charcuterie exists anywhere else other than on Earth.”

If your name is Lorraine, Bill, Suzanne or Stuart, I’ve got some bad news for you. You could be among the last of a dying breed. Baby experts Bella Baby used data from Google Trends and Baby Name UK to determine what baby names are on the outs among new parents so far this year. And while it’s common for names to go out of fashion (we can blame a certain digital assistant as the reason not many are calling their new bundle of joy ‘Alexa’ these days…), Bella Baby says the new results don’t mean we won’t some day see a resurgence of Angelas, Nicoles, Garys, or Chads in the future. Here are the most unpopular baby names in the UK so far this year…


"Everything I have I owe to this job... this stupid, wonderful, boring, amazing job." - Jim Halpert, The Office


A drought-proof weed may hold the key to feeding the world, according to new research. The common plant known as purslane, harbors important clues about how to create valuable drought-resistant crops. Yale scientists describe how it integrates 2 distinct metabolic pathways to create a novel type of photosynthesis that enables the weed to endure drought while remaining highly productive. Understanding these novel metabolic pathways could help scientists devise new ways to engineer crops such as corn to help withstand prolonged drought.